How Much Is Gavin Newsom Worth After Prevailing in the California Recall Election? 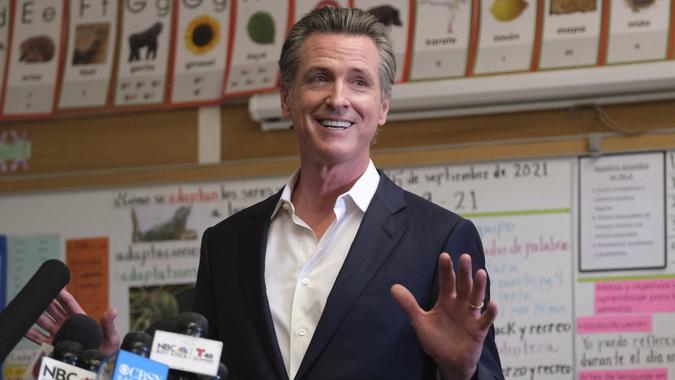 Gavin Newsom took office as the 40th governor of the great state of California with plenty of fanfare in January 2019. However, the 53-year-old Democrat faced a special election on Sept. 14 to determine whether he would be recalled, with 63.6% voting not to go through with a recall.

Latest Stimulus Payments: Qualifying California Residents Could Receive Up to $1,100 This Month
Find: A Look at Andrew Cuomo’s Net Worth as He Files for Retirement

While he has spent 24 years serving in California politics in multiple roles, including lieutenant governor and mayor of San Francisco, he is also a businessperson and investor who had an abundance of wealth and resources prior to his foray into government work.

With all of his businesses and financial holdings, he has more than $20 million in personal wealth, Celebrity Net Worth reported.

As governor, he just landed an $8,809-per-year raise that is set to take effect in December. The increase will make him the highest paid governor in the country, taking home $218,556 per year. ABC News reported.

See: 10 Rich Politicians Who Caught COVID-19
Find: 9 Private Islands You Can Buy for Less Than a California House

Before He Became Governor

Newsom has had his ups and downs. He was born in San Francisco in 1967 to a politically connected, but often financially-strapped, family. Though he struggled in academics due to his dyslexia, he ended up transferring to Redwood High School in Marin County, where he excelled in sports. With finances sometimes being unsteady, he said that he worked a variety of jobs prior to going to college. He went on to earn his degree from Santa Clara University in 1989.

Two-years after graduation, with the aid of some wealthy supporters and family friends — specifically, Gordon Getty — he launched PlumbJack Associates. Since then, his business holdings have grown to include wineries, hotels, clothing stores and restaurants.

His stake in these businesses, which grossed $25 million in 2002, was valued at $6.9 million when he disclosed his finances before becoming mayor of San Francisco in 2004, according to SFGate. He sold his share of his San Francisco businesses and holdings prior to taking office.

See: AOC and 12 Other Political Figures Who Made Major Career Changes
Find: Here’s How Much You Need to Earn to Be ‘Rich’ in Every State

Newsom has been married to Jennifer Siebel, a film director with whom he has four children, since 2008. Siebel comes from a financially well-off background, with her father being a prominent investment manager and real estate investor. She is related to Thomas Siebel, the multi-billionaire founder of the software company Siebel Systems.

Newsome previously was married to Kimberly Guilfoyle, a former San Francisco prosecutor currently working as a political commentator and advisor. The couple divorced in 2006 after five years of marriage, Celebrity Net Worth reported.

The Newsoms downsized their home when Gavin became governor.  In the first quarter of 2019, they listed their home in Kentfield, Calif., which they’d purchased for $2.225 million, for $5.995 million. Not finding the governor’s mansion in Sacramento to be a good fit for their family, they soon bought a home for $3.7 million in the nearby suburb of Fair Oaks, Calif.

Ultimately, the citizens of California decided not to recall Newsom on Sept. 14. Of course, even if things had gone differently, he would have still had PlumbJack to fall back on, which continues to do well.