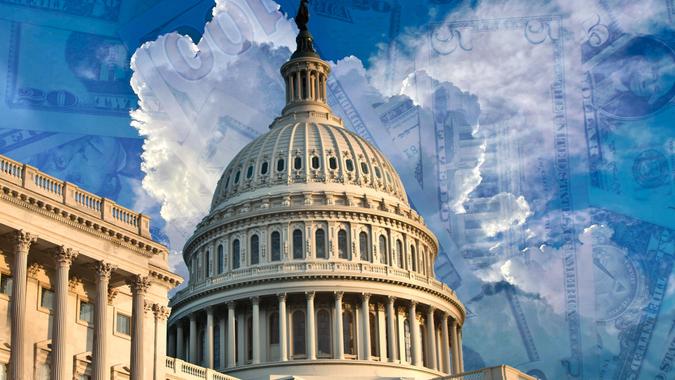 The federal government is due to reach its debt limit on Dec. 15, meaning payments and services that affect millions of Americans might have to be reduced or shut down if Congress doesn’t do anything to raise it. This has become a recurring problem, and a pair of lawmakers want to do something about it through a new bill that would fundamentally change how the debt ceiling is handled.

See: Government Shutdown vs. Debt Ceiling: What’s the Difference?
Find: Why the Debt Ceiling Is Always Up for Debate

The bill includes two options for temporarily suspending the debt ceiling, CBS News reported. In one of them, if Congress passes a concurrent budget resolution that cuts the debt per GDP by at least 5% over 10 years, it would automatically generate separate legislation to suspend the debt ceiling through the end of the following fiscal year.

The other option works like this: If Congress has not acted on a budget resolution, or if the debt ceiling is close to being reached, the president could request a suspension through the following fiscal year. This would go into effect unless Congress passes a resolution of disapproval. The president’s request to Congress would need to be accompanied by a debt reduction proposal that both the House and Senate would have to vote on.

“Every economist from the most conservative to the most liberal acknowledges that the path we’re on is not sustainable, but there’s very little consensus about when to do something about it,” Peters said in a statement. “To be honest, I think both parties have been, fallen short on this, and I think we’re trying to deal with it in a responsible way here.”

The bill he and Arrington propose has the backing of the Bipartisan Policy Center, a Washington, D.C.-based think tank, and has also been reviewed by key players in Congress and the Biden administration, CNBC reported. Whether it will make it into law is anybody’s guess, but it has caught the attention of numerous bigwigs in the nation’s capital.

“I know that this proposal has been circulated widely,” Shai Akabas, director of economic policy at the Bipartisan Policy Center, said in a press briefing. “That doesn’t mean that it will necessarily advance, but it does have momentum.”