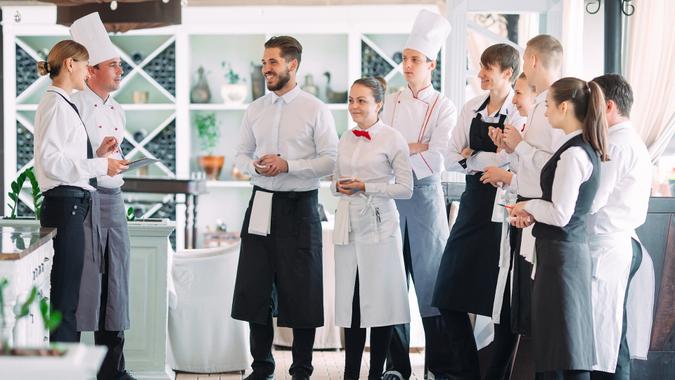 October added 531,000 new jobs, and the unemployment rate edged down by .2 percentage points, the U.S. Bureau of Labor Statistics reported Friday, Nov. 4. Job growth was widespread, they add, with notable gains in leisure and hospitality, professional and business services, manufacturing, and transportation and warehousing. They note, however, that employment in public education declined over the month.

See: A Look at Unemployment Numbers in Every State
Find: How the Unemployment Rate Impacts Your Financial Life

The unemployment rate is continuing to make progress downward, edging down to 4.6% in October. The number of unemployed persons now stands at 7.4 million. Although both measures are down, the BLS states that they still remain above their pre-pandemic levels. Before the pandemic, these figures stood at 3.5% and 5.7% respectively in February 2020.

The labor market has been making significant, albeit incremental, strides towards recovery. A combination of factors has been credited to the small liftoff experienced in the jobs market. Federal supplements to unemployment insurance ended in September, something that was argued to disincentivize workers from re-entering the jobs market.

The labor force participation rate remained unchanged at 61.6% in October and has remained within a relatively narrow range of 61.4 % to 61.7% since June 2020. To put this into perspective,  the participation rate is still 1.7 percentage points lower than it was in February 2020, right before the pandemic took its toll on the labor market.

Average hourly earnings increased slightly, coming in at 4.9% against the 4.9% expected, edging slightly higher than September’s 4.6%.

The report is overall a breath of relief after September’s jobs report largely disappointed, adding just 194,000 new nonfarm payroll jobs in over the month. This was against the Dow Jones estimate of 500,000, falling short over 300,000.

The report comes amidst surging inflation, which holds at around 6% for the year. Leisure and hospitality largely accounted for the gains, as Delta variant fears receded and the weekly unemployment claims also continued to fall off week after week.

October’s report signals a step in the right direction, despite the labor market still being roughly 4 million jobs short of its pre-pandemic levels.