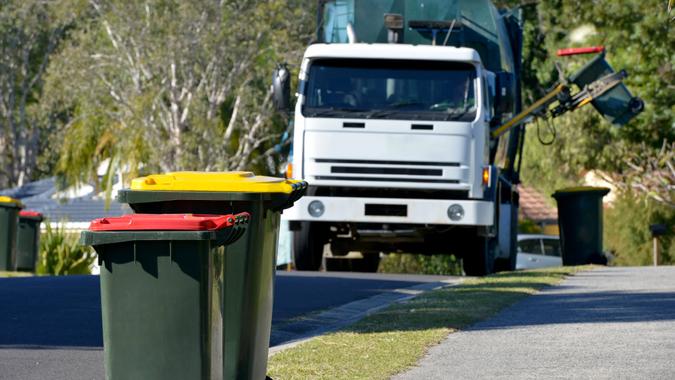 Before the advent of modern municipal recycling, people did their own recycling. If a pair of pants got a tear, they’d be fixed. When they could no longer be fixed, they’d be cut up and used as rags. When the rags wore out, the scraps would be collected to be turned into paper, a way to save materials — and money.

Today, those pants would most likely be thrown in the garbage before becoming anything other than pants.

Read: Billionaires Who Have Struck It Rich by Going Green

Curbside recycling programs in the U.S. have been around since the 1970s. That’s when landfills reaching their capacity limit dovetailed with a new environmental movement and consciousness. Since then, most Americans have been throwing whatever they think can be recycled into the bin with the triangle arrows and feeling pretty good about doing the right thing for the planet.

The fact is, that system isn’t working the way it should and now it’s costing us.

The High Price That Comes With the Recycling Crisis

China, one of the main markets for U.S. recycling, stopped accepting most American scrap plastic and cardboard in 2018. Prior to this, almost half of the world’s recycling was handled by China.

The ban, which China calls the National Sword policy, prohibited the import of 24 scrap materials and severely limited the allowable level of impurities in others, such as food containers that haven’t been properly rinsed or nonrecyclable materials mixed in with the good stuff.

In the wake of the ban, the cost for U.S. cities to recycle their goods has shot up as they’ve scrambled to find domestic processors. The city of Stamford, Connecticut, earned $95,000 selling its recyclables abroad in 2017. In 2018, it had to pay $700,000 to get rid of them. Hundreds of cities and towns across the country have shut down, limited or been made to accept much higher costs for their recycling.

Without willing foreign buyers, all that trash has had nowhere to go and the results have impacted our wallets.

See: 8 Jobs That Are Helping To Fight Climate Change

The new reality of recycling has left the industry grappling with facts such as these:

“The China ban has put a strong eye on the actualities of recycling and the way it’s been treated,” said Dylan de Thomas, VP of External Affairs for The Recycling Partnership, a nonprofit organization that works with private and public industry to reform recycling. “We thought we could recycle anytime, anywhere, but there hasn’t been a lot of programmatic awareness and communication about how to recycle properly. It created challenges in the economics.”

Find Out: How Animal Conservation Can Save the World Money

Even when China was buying more American recyclables, only a small fraction of it was actually being transformed into patio decking or waterproof clothing hikers could proudly sport on the trail. A lack of standardized recycling infrastructure in the U.S. has created a patchwork of different policies, practices and education level from community to community. And when people throw the wrong items in the bin or don’t clean them properly, whole loads can end up getting dumped in local coastal shantytowns abroad, polluting the land and waters there and beyond.

Consider these other facts:

When it comes to recyclable materials, plastics are particularly problematic. Only 9% of plastics are recycled in the U.S. (as of 2018). That’s compared with 68% of paper which is recycled or composted and 25% of glass.

Part of this is because of confusing or misleading labeling. It’s easy to assume that anything with the triangle symbol on it can be put in the bin. But it’s those numbers inside the triangle that matter. While plastics can contain the numbers 1 through 7 inside the arrows, only two of those classifications — types 1 and 2 (items like water bottles, peanut butter jars and plastic food trays) — are regularly turned into new products.

Environmental groups and some states have been pushing manufacturers to remove the feel-good symbol from packaging unless it can truly be effectively processed by municipal waste programs. While it may be technically true that a plastic fork or aspirin bottle with a number 6 label on it can be recycled, it’s going to take a lot of effort on the part of the consumer to find a specialty processor and take those items there themselves.

The need to improve recycling goes beyond just reducing waste.

See: How Will Ongoing Climate Change Efforts Impact US Jobs?

According to The Recycling Partnership, if all of the 37 million tons of single-family recyclables were turned into new products instead of thrown away, it would:

Fixing the system could be largely helped by increasing demand for recycled materials, said Nilda Mesa, an adjunct professor at Columbia University’s School of International and Public Affairs and former director of Columbia’s Urban Sustainability and Equity Planning Program.

Find Out: How Endangered Species Are Responsible for Trillions of Dollars in the Global Economy

“Markets for recyclable materials need to be more robust,” she said. “That could happen if there were a greater demand for items with recycled content.” Building new construction with the goal of LEED green building certification is a good way to stimulate the market, she said, as well as phasing in recycled content requirements.

The good news, according to de Thomas, is that the issues laid bare by China’s ban have started to create the kind of reform that has been needed for a long time in addressing our overreliance on foreign markets. More domestic processing facilities are coming online to handle the volume. Big brands like Coca-Cola, Unilever, Nestle and others are sparking demand for recycled materials with mandates for recycled content in their packaging and manufacturing facilities.

“That’s a gigantic shift,” he said. “You’re going to see more of that in the coming years, as well as with an administration that’s prioritizing recycling more over the previous administration.”

More: Green Tax Credits That’ll Save You Hundreds When You File

The Recycling Partnership has also seen increased engagement from communities and municipalities in consumer education campaigns, such as leaving friendly informational flyers on the bins of customers who are making recycling mistakes. “There are challenges, but there are a lot of good signals as to why we’re meeting those challenges,” de Thomas said.

Perhaps just as important to the long-term picture is re-envisioning what will become waste from the beginning, rather than focusing only on fixing a broken industry. That means manufacturing goods that are built to last, fixing those pants and other items instead of throwing them away and buying used products rather than purchasing new ones, which are all steps that can be taken throughout the chain.

“There has to be greater commitment to the circular economy,” Mesa said. “Reduce and reuse first, and only then recycle. Waste should be a last resort.”