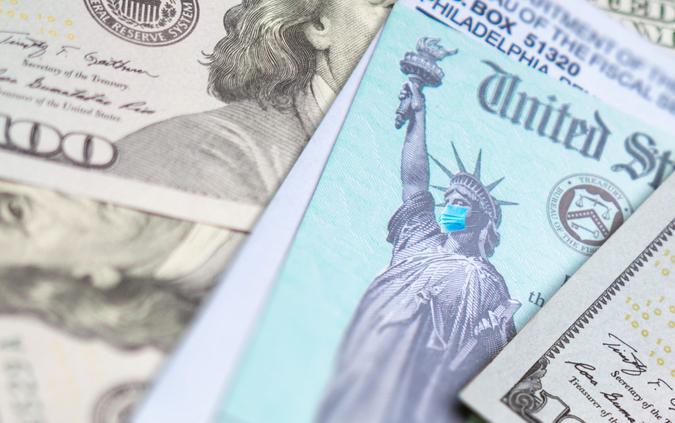 When the pandemic struck seemingly out of nowhere, millions of Americans were pushed into unemployment and poverty. We needed help and we needed it bad, which is why the federal government issued three stimulus checks. These payments were used to do everything from cover rent to build up a nest egg.

Anyone following the news coverage of the stimulus rounds likely remembers how complicated the whole affair was. There was always chatter of when and whether we would receive any money at all. In fact, we’re still having these conversations in 2022.

Stimulus Update: These Groups Are Still Eligible in 2022
Also See: The Effect of Stimulus and Increased Unemployment Payments on the Economy in 2022

Though plainly needed, stimulus checks were issued behind a veil of mystery. And there are several facts about them that most Americans may still not know.

Stimulus Checks Were Calculated Based On Previous Tax Returns

“In the situation where your 2019 was above the income thresholds but your income dropped below the $75,000 (adjusted gross income) for single filers or $150,000 (adjusted gross income) for married filers, you are eligible to receive the $1,400-per-person stimulus via tax credits on your tax return. It is important to review your 2019, 2020 and 2021 tax summary with your tax professional to determine if you are eligible to receive the 2021 tax payments.”

“There were three stimulus payments issued and eligibility guidelines changed throughout,” Weiss said. “Just because you were eligible or ineligible for one round of stimulus payments doesn’t mean you won’t qualify for another. As an example, on the third stimulus check, dependents of any age were counted. Dependents between 17 and 24 were ineligible for the $500 bonus in 2020.”

You Don’t Have To Pay Taxes on the Money

“A large percentage of Americans don’t realize that they won’t have to pay income tax on their stimulus checks,” said Carter Seuthe, CEO of Credit Summit. “A lot of people have been confused about the nature of the stimulus checks they have received and are just crossing their fingers that they don’t have to pay taxes on them. Stimulus checks are not considered to be part of one’s gross income, which is why they are excluded from being taxed.”

There Is a Phase-Out for Stimulus Checks

“The maximum Adjusted Gross Income for couples filing jointly to receive a full stimulus is $150,000,” Weiss said. “This amount is then phased out if you earn more than $150,000. In other words, you’d still be eligible to receive a stimulus if your income is $150,001.”

You Can Still Get Your Payment (But Hurry)

“If your check got lost in the mail or pushed to the back of your drawer and expired, you’re not out of luck yet,” said Cliff Auerswald, president of All Reverse Mortgage, Inc., who has worked with clients receiving stimulus checks to help them continue to make their debt payments.

“Every government-mailed U.S. treasury check comes with a one-year expiry date, as keeping valid checks floating around indefinitely is a big security concern,” Auerswald said. “But only the paper expires, not your right to the money. If you’re sitting with an expired check, contact the IRS, get a new check reissued and get your money. You can also get a stimulus check replacement if yours was lost or stolen.”

If you never got a check in the first place, it’s still not too late.

“People who didn’t get the third stimulus check or the full amount are still able to get their money,” said John Robinson, a financial planning advisor with Credello. “They will just need to fill out their 2021 taxes and, under the recovery rebate tax credit, stake their claim to get the money they are entitled to.”

Some People Qualify for a Recovery Rebate Credit

“This applies to both the $1,400 Covid-19 relief bill and the Child Tax Credit. So far from the IRS data, it looks like there have been a significant number of people who did not receive their full credit and have already filed their taxes, which is likely why we have seen this increase in average refund amounts.”

Your State May Have Its Own Stimulus Program

“Some states across the U.S., including California and Florida, provided additional stimulus to residents,” Weiss said. “For example, in Florida, many first responders and educators are eligible to receive a $1,000 stimulus payment from the state. Unlike the federal stimulus checks, in some cases applying to receive the payment may be required. Check with your state for eligibility.”

We’re Probably Not Getting Any More Checks

“Though rumors have floated, the possibility of a fourth stimulus check coming to Americans is pretty unlikely,” said John Li, co-founder and CTO of the lending company Fig Loans. “Many struggling Americans could use another $2,000 to help float their bills a little longer. Still, Biden’s administration is sharply focused on pushing economic growth through infrastructure and job creation rather than stimulus checks.

“With inflation at a whopping 7.5% in January, the government is trying to slow its growth as much as possible. Since the previous stimulus checks were a big contributor to inflation last year, policymakers will likely avoid sending out another in fear that the ‘inflation situation’ will worsen.”