What Does the US Defense Budget Actually Pay For? 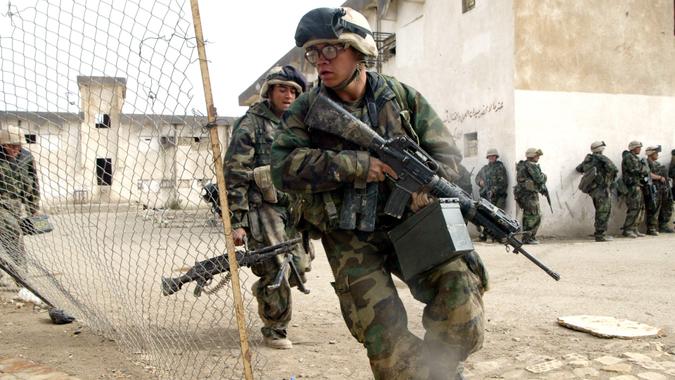 The United States spends more on defense than the next 10 highest-spending countries combined. Defense accounts for half of America’s discretionary spending and 15% of total federal spending.

Support Your Community: Don’t Miss Out on Nominating Your Favorite Small Business To Be Featured on GOBankingRates — Ends May 31

That’s a whole lot of defending. But what do all those taxpayer dollars actually pay for?

There Are Lots of Budgets Within the Budget

Military and defense are counted as discretionary spending in the federal budget, as opposed to mandatory spending, which covers programs like Social Security, Medicare and Medicaid.

The national security budget for the fiscal year 2021 is $740.5 billion. It breaks down like this:

Read: All About the Federal Budget and Its Role in Your Life

The U.S. also spends hundreds of billions of dollars to fund other agencies that contribute to America’s defense and national security, including:

See: This Is Where Your Tax Dollars Actually Go

A Look at How That Money Is Spread Around

The breakdown of defense spending changes over time as circumstances evolve. A half-century ago at the height of the Vietnam War, for example, the U.S. dedicated far more of its military budget to personnel and the procurement of weapons. Today, DOD spending breaks down like this:

The biggest chunk of DOD spending — nearly half — goes to operation and maintenance, which includes things like planning, training, equipment maintenance and non-VA military healthcare. In 1969, it was just 29%.

This category pays for military pay and retirement benefits. It represents less than one-quarter of DOD spending today, but in 1969, personnel spending accounted for 33% — one dollar in three — of the defense budget.

Find Out: Here’s What Men and Women in Uniform Earn

With more than 60% of the budget accounted for, the rest is divided up among smaller obligations, including:

So, Where Do All the Dollars Go?

The U.S. war machine is in a constant state of evolution. It’s always upgrading its systems, platforms, hardware, software, weapons, vehicles, surveillance capacity, cybersecurity and intelligence capabilities. None of that is cheap. The 2021 defense budget allocates billions of dollars toward these kinds of improvements.

More: All You Need To Know About the Economy and Your Money

The 2021 budget includes the biggest-ever allocation for RDT&E. The technologies that those kinds of efforts produce are called advanced capabilities enablers (ACEs). They include things like hypersonics, AI, autonomy and microelectronics.

A Columbia-class ballistic missile submarine is just one of the pricey expenditures in the maritime budget. There’s also an order for a Virginia-class submarine, a CVN-78 Ford-class aircraft carrier, unmanned surface vessels and a frigate.

Read: 10 Jobs That Grant You These Unique Tax Deductions

This includes money for platforms like the B-21 Long-Range Strike Bomber, a Columbia-class ballistic missile submarine and Long-Range Stand-off (LRSO) missiles.

This part of the budget includes orders for thousands of joint light tactical vehicles, dozens of M-1 Abrams Tank modifications and upgrades, as well as dozens of amphibious combat vehicles and armored multipurpose vehicles.

Cyberspace spending funds both cyber defense and offense, as well as things like AI and cloud infrastructure.