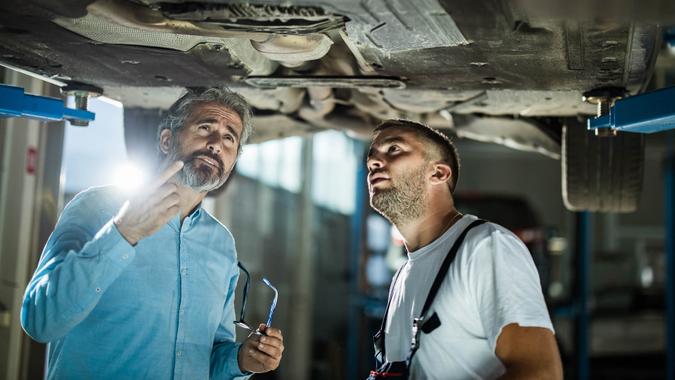 Car ownership is full of hidden costs that can be surprisingly expensive and include a whole host of things, from insurance to maintenance costs.

“Knowing the true cost of ownership for your vehicle can help you prepare for the unexpected,” said Robert Walden, founder of VehicleFreak.com.

Belts, Hoses and Other Parts

Though we tend to worry about the big parts of our cars — the engines, the tires, etc. — they’re comprised of a lot of smaller parts that can ruin performance.

“(These) wearable parts will require replacement, lest you have a disastrous breakdown on your hands,” Walden said.

Don’t skimp on motor oil, Walden said, because it will cost you later in repairs.

“Low-viscosity synthetic motor oil will keep your engine running in tip-top shape and help ensure you do not have mechanical problems down the road,” he said. “But make sure you budget for $75 to $100 for each oil change at regular intervals.”

Some cars come with built-in services that will incur monthly or annual charges if not cancelled, Walden explained.

“These include emergency (e.g., Onstar) systems, satellite radio and other data features,” he said. “Make sure you understand the total cost of these features before re-activating.”

“The most obvious accompanying cost to owning a car is fuel cost,” said Max Turner, CEO of Car Donation Centers.

Considering the high cost of gas right now, you could be very surprised at the pump. Yet driving a car is more convenient than many other forms of public transportation.

Kathleen Ahmmed, co-founder of USCarJunker, points out that you essentially begin to lose money the moment you buy your car.

“As a general rule, the instant you drive off from the lot in a brand-new car, its value will usually drop as much as 10%,” she said, “and it only gets lower from there. So, by the time you end up selling your car, chances are you have already lost thousands.”

Depreciation applies to both traditional gas vehicles and electric vehicles, she points out.

“And the irony of it is that the best way to reduce car depreciation is to spend money regularly servicing your car and keeping it well maintained,” she said, “which means that the mere act of owning your car is an expense in itself.”

Any vehicle repair will set you back a lot of money, said Matas Buzelis, automotive expert at carVertical.

However, trying to save money by purchasing low-quality parts, he said, is a “a quick route to astronomical maintenance costs.”

“Low-quality parts do not ensure the vehicle’s durability and reliability,” Buzelis said. “Buying a cheaper component may save you money in the short term; but, if you need to replace the same part again in six months, you’ll have to return to the workshop, spend money on gas and pay a technician to complete the work.”

People who live in major cities know that free parking places are nearly impossible to come by, Buzelis said.

“Every journey to the city necessitates a minimum parking expense,” he said. “Parking in Los Angeles, for example, can cost anything from 50 cents to $5 per hour. Even at the cheapest rate, parking costs $4 for 8 hours, $20 for a week and $90 a month on average.”

“Years ago, there used to be a time when an oil change was a simple affair that could be accomplished in your driveway for the cost of oil and a filter,” said Devin Purcell, an automotive professor and editor-in-chief of AutoKnowIt.com.

But many of today’s cars have modern engines and special oil requirements.

“These oil changes can now cost over $300 or $400,” Purcell said. “These prices used to be normal for exotic vehicle owners, but these prices are for some of the most common vehicles driven today.”

Once you buy a car, you have to insure it, of course.

Ian Lang, senior car advice editor at Bumper.com, a vehicle history report company, said, “Your credit report, age and city where you live will all influence how much you will have to pay for car insurance. You may also be responsible for the deductible if you are involved in a car accident. Traffic violations and their associated costs shouldn’t be overlooked, too. Expect higher insurance rates and fines if you receive a ticket.”

These fees vary greatly by state, though the average is about $669, Lang said.

“There are some states that impose excise taxes, in which they tax the depreciated value of your vehicle every year. Some states charge only a small registration fee.”

Walden adds that these fees can come with “sticker shock” for many car owners since these fees are often rolled into the purchase price.

It can cost several thousand dollars to maintain a car each year, which can vary depending on where you live and on the make and model of your vehicle, Lang said.

“Even if a car never experiences a mechanical failure,” Lang said, “it will still require hundreds, if not thousands, of dollars in replacement tires, filters and oil over its lifetime.”

Purcell reminds people who are flocking to purchase electric vehicles that these require long-term care as well.

Purcell points out that batteries in electric vehicles have finite lifespans and require replacement sometimes more than once in the life of the vehicle.

“(In) the Toyota Prius, for example, battery life is generally expected to be 10-15 years,” he said. “When the battery needs replaced, it can cost close to $2,000 or more to replace.”