What Money Advantages Are There to Being Married vs. Single? 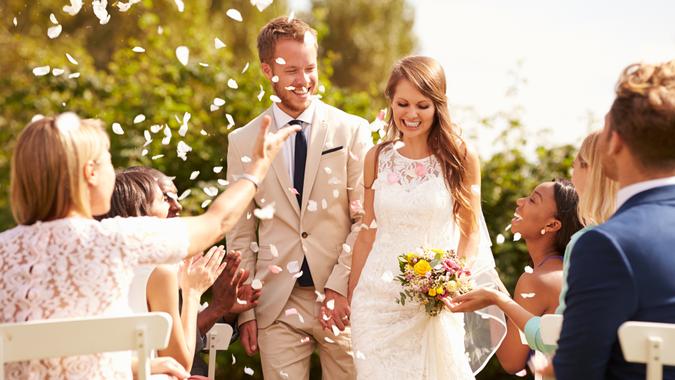 Marriage can come with its rewards, like a fun wedding and honeymoon, years of wedded bliss and always having a life partner. Those benefits can also be extended to include certain financial advantages.

Not only do married couples usually share in the expenses of a household such as a mortgage or rent, utilities and other bills, but now it appears inflation has made it even more financially beneficial to get hitched.

According to The Wall Street Journal, single people are falling behind their married friends when it comes to money matters as the wealth divide between the two segments keeps growing. Current data from the Federal Reserve Bank of St. Louis shows that the median net worth of married couples between ages 25 and 34 is now nine times higher than their single counterparts.

As WSJ suggested, much of this is due to the rising cost of goods and house prices. In the simplest terms, if you’re married, typically you only have to pay half of what a single person would since you have a partner to split expenses.

As Quicken reported, there are a number of other financial benefits that come along with getting married, such as generally being able to land a larger mortgage than a single person would due to a combined income. As well, health care costs often go down, as a married couple might take advantage of joint health insurance (it should be noted that civil unions also qualify for this perk in many states).

When it comes to Social Security, if you’re married and your spouse passes away, you’ll also be entitled to those benefits. Quicken also noted that the IRS looks favorably on taxes when you file jointly — whereas single people generally pay 35% of their income towards taxes, married couples pay 29%. The article further states that, statistically, couples tend to start saving for retirement earlier than single people, which may put them in a better position for their future financial status.

But that doesn’t mean there aren’t financial advantages to being single, too. One of the big advantages of remaining single is holding more control over your bank account and finances. According to Business Insider, money is the No. 1 issue many couples argue about and is one of the leading causes of divorce. It’s one reason why engaged couples are encouraged to meet with a financial advisor before walking down the aisle.

If couples aren’t aligned in their spending (one saves, one splurges) or one brings a lot of debt to the table while the other doesn’t have any, this can be a significant problem. For example, when it comes to getting a mortgage, per Forbes, this can be imperative — if one spouse has bad credit or little income, it can actually hurt the couple’s chances for borrowing.

Of course, single people are able to account just for their own spending habits and don’t have to worry about joint bank accounts.

Married Couples May Be Used to Enjoying a Double Income, Job Loss Could Be Shocking

An issue could arise if one spouse loses their job and suddenly the incoming money is cut in half for the couple. When you’re married, you may become accustomed to a certain way of living — the job loss of one partner can be detrimental to the couple’s financial well-being.

There’s also the huge cost that comes with divorce, should a marriage end. Per Forbes, in 2022, the median cost of a divorce and associated legal fees is about $7,000, with the average cost coming in around $15,000-20,000 (especially if the split is contested). There’s also the costs of alimony and child support that often factor into the equation.

Take Our Poll: How Do You Typically Split the Restaurant Bill?
More: 10 Things You Should Always Buy at Sam’s Club

Whether you’re married or single, there are always certain precautionary measures to take into consideration when thinking of finances. CNBC contributor and economics professor Laurence J. Kotlikoff remarked in a Feb. 12 report that signing a prenup is always a good idea before you get married. “It’s far better to negotiate in advance how things will be settled than have one party feel they have, in getting married, lost bargaining power in making financial decisions that could damage them in the context of divorce,” Kotlikoff wrote.