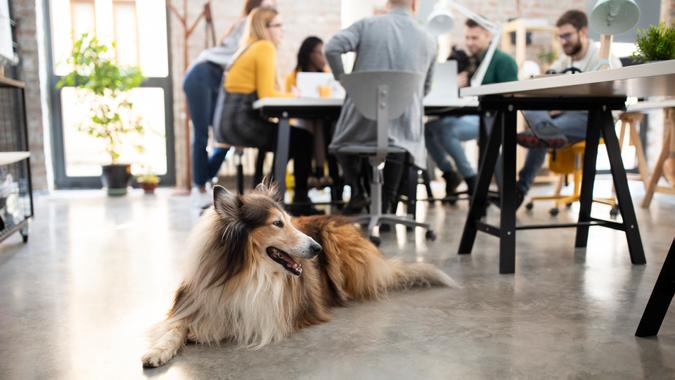 Note to employers: If you want to find and keep workers during the current labor shortage, put out some pet bowls and free up office space for your team’s furry family members. Otherwise, you might find some of your employees heading for the exit.

See: How Your Pandemic Pet Helped Raise General Mills’ Fiscal 2022 Outlook
Find: 6 Ways To Save Money on Dog Food and Other Pet Supplies

About 60% of pet owners have left jobs since the beginning of the COVID-19 pandemic because they returned to offices that didn’t do enough to accommodate pets, according to a new survey of 2,000 employed pet owners.

The survey, conducted by OnePoll on behalf of Vetster, found that 71% of respondents have made a “significant life change” because of their pets, the StudyFinds website reported. Six in 10 said they quit jobs because their employers were not pet-friendly. The survey was conducted ahead of National Pet Day on April 11, 2022.

Seven in 10 respondents said they’re willing to accept a pay cut if it means they can bring their pets to work. A similar percentage said they would benefit more from a pet-friendly office now than they would have before the pandemic.

Nearly half of those polled (48%) believe their pets have helped improve their productivity at work — including more than half of both cat (56%) and dog (53%) owners. Small animals such as rabbits and ferrets were the most likely to inspire workers and boost their productivity.

“Our data shows that many pet parents have had positive experiences when their pets have played a role in the workplace,” Vetster CEO Mark Bordo said in a statement. “Pets can help create and maintain a positive culture at work while improving people’s mental health and fostering friendships between colleagues.”

The good news for pet owners is that many workplaces are beginning to be more accommodating. More than four in 10 (42%) of respondents said their offices now stock bowls and other pet supplies.

Spending time with pets reduces workplace anxiety for the vast majority of respondents. But more than half said they still feel guilty taking care of their pets during working hours.

“We’ve normalized taking care of kids during working hours, so why not include all members of the household?” Bordo said. “Companies can do their part by giving employees a full- or half-day off to care for their fur friends, donating to a charity of their choice, or organizing a pet meet-up on National Pet Day.”