Poll: 75% of Respondents in Favor of Raising the Minimum Wage 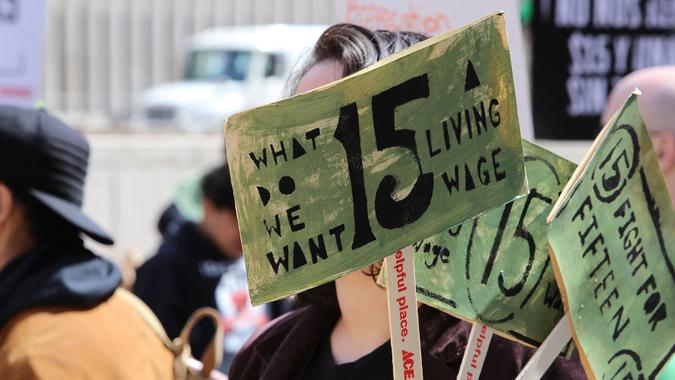 But not everyone is on board with raising the minimum wage, with some analysts believing that over 1 million Americans would lose their jobs. Research conducted by the Congressional Budget Office also found that an increase in the minimum wage would “reduce business income and raise prices” as companies pass on the higher costs of labor to consumers. In addition, it could slightly reduce the U.S.’s total output.

Related: Here’s What the US Minimum Wage Was the Year You Were Born
It’s Not Much: What You Can Rent on a Minimum-Wage Salary in Every State

The poll also found that 12% of Americans are in favor of keeping the minimum wage at $7.25, while 1% believe it should be even lower. And then there are those who don’t believe the U.S. should have a federal minimum wage at all, with 13% voting for this option.

Take a Look: What Happened When These Places Raised the Minimum Wage to $15

Who’s in Favor of Raising the Minimum Wage?

The GOBankingRates poll looked at various demographics to determine which groups are more likely to support raising the minimum wage.

Find Out: Here’s How Much Men vs. Women Earn at Every Age

Methodology: An original poll posted to GOBankingRates collected responses from 4,162 people from March 8, 2021, to June 15, 2021. The poll asked respondents: “What do you think the minimum hourly wage should be in the United States?” GOBankingRates used CivicScience to conduct the poll. Results are unweighted. Demographic insights were discovered by comparing respondent profiles across a wide range of attributes. Data was analyzed on June 15, 2021.