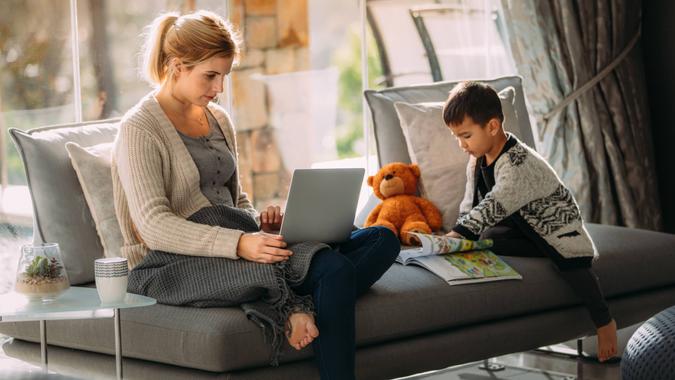 One point of contention in President Joe Biden’s Build Back Better plan, which is still being debated, is lowering the costs of child care. In the meantime, while lawmakers are negotiating which parts of the act to remove — or not — the high cost of child care is pushing millions of Americans out of the workforce, with a majority  being women.

The Build Back Better Act invests $450 billion in both lowering the cost of child care and securing universal pre-K for three- and four-year-olds.

“The lack of affordable child care is also hurting our economy. As workers are forced to stay home, employers are struggling to fill job openings to meet demand and grow their businesses. The Build Back Better Act makes a historic investment to lower the cost of child care for working families, expand the availability of high-quality child care, and raise wages for child care workers,” according to the plan’s fact sheet.

“I remember standing in the driveway with my baby bouncing on my hip and my panic mounting because I had to leave for work but the babysitter hadn’t come yet. Millions of women just flat-out won’t be able to work unless we tackle this child care crisis,” Senator Elizabeth Warren tweeted last week.

Explore: McDonald’s Adds Child Care Benefits — Is It Enough to Entice Women Back to Work?

Through this investment, the majority of families would not pay more than 7% of their income on child care, and child care providers would have the resources to raise wages for child care workers and expand available supply to serve more children and families, according to the plan.

The Treasury Department reported last month that the average cost of care is roughly $10,000 a year per child and consumes about 13% of family income, nearly twice what the government considers affordable, The New York Times reported.

Last week, while addressing the Build Back Better agenda in Michigan, Biden said “for example, here in Michigan, the average two-parent family spends $10,400 on child care costs for just one child each year. Thirty years ago, the United States ranked sixth — sixth among advanced economies in the share of women in the workforce. You know where we are today? Twenty-three. Twenty-two countries have a higher percentage of their women in the workforce making a competitive wage than the United States.”

Prepare: Qualify for Stimulus Payments and Child Tax Credit by Filing Your Tax Extension by Oct. 15
Learn: You Can Claim Child Care Expenses for a Tax Credit — Do You Qualify?

The Center for Law and Social Policy tweeted that “a bold investment in child care would serve 8.27 million young children a year when fully implemented over 10 years. That is 11 times more children than those served without such an outlay. Now is the time for #BuildBackBetter #CareCantWait.”

Have rising costs and lack of options altered your career trajectory? Let us know by taking out latest anonymous poll.