Top 10 Most Expensive Shoes Ever Made 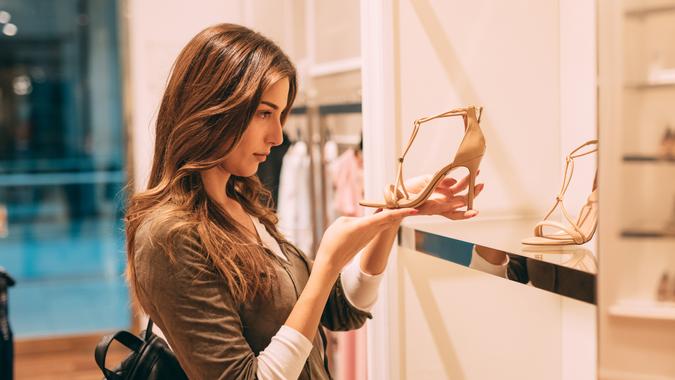 Everyone knows someone obsessed with shoes. You might even be that person yourself, always keen to hear about the new Yeezys or Jordans. But you’ve probably never seen shoes quite like these. High-fashion designer names, incredibly talented artists and the world’s finest jewels make these the most expensive shoes in the world.

10 Most Expensive Shoes Ever Made

Because of the appreciation of artwork and the materials used in the creation of these pieces, the prices shown are the values as of the date of their release, with the notable exception of No. 4.

It would be an injustice to a list of expensive shoes to exclude the world’s favorite sneaker. But not just any pair of Js will do — these had to be special. That’s why the first piece on this list is Drake’s 24K gold Jordan 10s.

Based on the price of gold at the time of purchase and the purported 100 lb. total weight of these shoes, the material alone should have been worth $1.9 million. Considering that Drake commissioned Matthew Sena — an acclaimed mixed media and conceptual artist who’s known for his secret process — to create the one-of-a-kind pair, it sounds like he got a bargain.

In anticipation of the 2014 season finale of “America’s Got Talent,” Nick Cannon knew that he wanted to make a big statement. As the story goes, he contacted Jason Arasheben, the force behind Jason of Beverly Hills, for help in creating “the most expensive shoes in the world.”

After spending four months sourcing the 14,000 diamonds, with a total weight of 340 carats, that adorn the shoes’ surface and going through seven pairs of shoes across 2,000 hours of work, Arasheben finally landed on a pair of patent-leather Tom Fords as the base for this “over-the-top” masterpiece.

You might not know this, but tanzanite is rarer than diamonds. It was discovered by the Maasai tribe in 1967 on Mount Kilimanjaro, and that single mine is still the only one known to man. These heels measure 4.5 inches and are adorned with 185 carats of the gemstone — fitting, as Stuart Weitzman designed them in collaboration with jeweler Eddie Le Vian.

Despite their rarity and beauty, however, they’re still considered semi-precious stones, so that alone wouldn’t be enough to fetch such a high price. That’s probably why the designers added another 28 carats of diamonds, just for good measure.

This one-of-a-kind pair is the stuff of fairytales. Inspired by the story by the same name, Weitzman sought to create something a bit more wearable than the fabled glass slippers.

Stuart Weitzman has a knack for producing some of the world’s most valuable footwear, and the Rita Hayworth Heels are no exception. Rita Hayworth was one of the biggest stars of her time, and she helped inspire the popularity of the stiletto heel throughout her prolific film career.

Those who wonder at the connection between these shoes and Rita Hayworth need look no further than the heels’ satin flowers. The diamond, ruby and sapphire stones set in them once belonged to the superstar, making this a truly special pair.

Though these shoes may seem like luxury items, converting money to jewelry can also be a way to store money securely. Precious stones like diamonds resist market fluctuations and have high liquidity, which can make them a good investment option.

It took Harry Winston two months to craft these jewel-encrusted slippers, which were created in 1989 to commemorate the 50th anniversary of “The Wizard of Oz.” The shoes were made in a size 4 to remain true to the film, and they carry 25 carats of diamonds and 1,350 carats of rubies.

The surprising thing about this pair is that the original shoes worn in the film sold at auction for less than these. The $660,000 that they sold for is still a hefty sum, but this remains one of the few cases where the remake is more costly than the original.

If it weren’t so easy to verify, this would seem like a joke. But the shoes that were used in an attempt at assaulting a former president are worth $10 million to at least one Saudi Arabian man.

The craftsmanship of this shoe — the Ducati Model 271 — is claimed by Turkish cobbler Ramazan Baydan. There are a few other manufacturers in other parts of the world, but that didn’t stop orders for the “Bush Shoes” from flooding Baydan’s shop, and it certainly didn’t stop Hassan Mohammad Makhafa from offering $10 million for the original pair with plans to enshrine them forever.

Debbie Wingham began her career in fashion, expanded her interests into cakes, then brought the two together to create what was, for a time, the most expensive pair of shoes in the world. These $15 million heels look as much like a delectable treat as they do the near-pinnacle of high-fashion footwear.

Putting these shoes together took hundreds of hours, a few precious gems and plenty of gold — even down to the 18K gold thread that makes the stitching.

It’s worth noting that Wingham’s confections command even higher prices than her shoes. A diamond-encrusted cake cost one customer $64 million.

It’s hard to raise the bar from a pair of $15 million stilettos, but two high-class luxury brands came together to make it happen. This particular pair is made of gold and adorned with flawless D diamonds, two of which weigh in at a whopping 15 carats.

The CEO of Passion Jewellers weighed in on their design, saying that they reflect “the spirit of the Royal Dream, being composed of limited-edition timepieces created for the modern high-society woman.” You can catch a glimpse at the Burj Al Arab hotel in Dubai, where they’re on display.

This is the main event — the top of the list. Forgive the pun, but this pair of shoes is quite literally out of this world.

If you’re going to showcase a record-breaking shoe, you do it in style. These, for example, were revealed to the world for the first time on a yacht in Dubai, as a part of MIDE (Made in Italy, Designed in Emirates) Fashion Week.

It’s got a heel made of solid gold, 30 carats of diamonds and a bit of 16th-century Argentinian meteorite. It was modeled after the 163-story Burj Khalifa skyscraper, the Daily Mail reported after shoes’ 2019 unveiling.

Though many shoes gain value from their stones, the context behind them can play a big role as well. This is especially true if they were flung at a president — but we wouldn’t recommend you try it yourself.