This Is the Wealthiest City in Your State 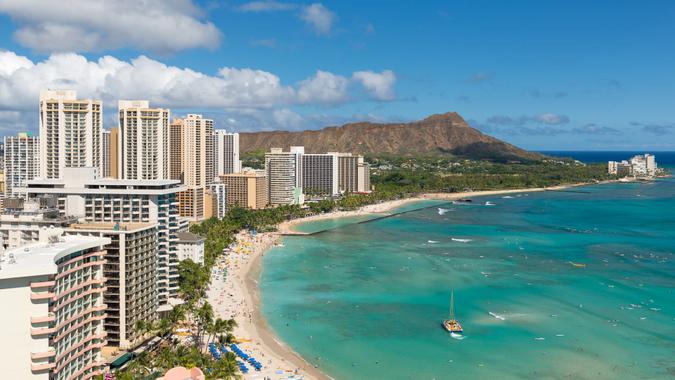 Have you wondered where the wealthiest cities in the country are? New York City and San Francisco might come to mind, but big businesses and high rents don’t necessarily translate to wealth for a city’s residents. In fact, what separates some of the wealthiest cities from their less wealthy counterparts might surprise you.

Keep Reading: From Alabama to Wyoming: The Cost of Living Across America

Highland Lakes is a census-designated place, meaning it isn’t incorporated. Residents clearly value education, with 99.1% of adults having graduated from high school.

Residents of Fishhook have easy access to the Alaska State Fair, which is held annually in Palmer, about 13 miles south. The 2021 fair will be held Aug. 20 through Sept. 6, and scheduled concert performers include Martina McBride and Billy Idol.

Residents of the Phoenix suburb enjoy an average of 294 days of sun per year, giving them plenty of opportunities to play golf or participate in other outdoor activities. Paradise Valley was the longtime home of U.S. Sen. Barry Goldwater, and the town honored him with the Goldwater Memorial.

Planning To Move? These Are the 50 Best Cities for Renters

It shouldn’t be a surprise that California’s richest communities are clustered together near Silicon Valley. After all, the region is the home of the giants in the tech industry, including Apple, Google, Hewlett Packard, Intel and Oracle.

Retiring? Worst Places To Spend Your Golden Years and Where To Retire Instead

Cherry Hills Village is south of Denver and a primarily residential suburb consisting of 6 1/2 square miles. It was incorporated in 1945.

See: States Where the Rich Get Richer and the Poor Get Poorer

Darien is part of Connecticut’s Gold Coast, located alongside Long Island Sound. It offers waterfront living while still being commutable to New York City. It’s about an hour away.

Make Your Money Work Better for You
In North Star, a suburb of Philadelphia, the median housing value is $445,900, according to the U.S. Census Bureau.

Pinecrest, incorporated on March 12, 1996, turned 25 this year. It is in Miami-Dade County and south of downtown Miami. It has a lot of titles: Tree City USA, Playful City USA and Community of Respect.

Druid Hills, one of Atlanta’s first suburbs, was designed at the turn of the 20th century by Frederick Law Olmsted, who also designed Central Park in New York City, Stanford University, the grounds of the U.S. Capitol and a number of large estates, including the Biltmore Estate in North Carolina.

Related: 65 Splurges of the Filthy Rich

East Honolulu is part of Hawaii’s capital city but also is recognized independently as a census-designated place. It is popular among retirees, with more than 25% of its population age 65 or older.

Winnetka, about 30 minutes north of Chicago, is a haven for those who love their green space. It has 242 acres of parkland, as well as forest preserve land.

Located 20 minutes north of Indianapolis, Zionsville has small-town charm in the shadow of the big city. Zionsville is known for its award-winning school district, as well as its unique shops, dining options and art galleries.

A suburb of Cedar Rapids, Robins knows how to celebrate special occasions, annually hosting the Bluegrass Festival, summer fireworks, the Robins Roundup, an egg hunt at Easter and the Santa Claus Christmas party. The population has grown by 83% since 2000.

Mission Hills was developed by urban planner J.C. Nichols as a garden community, and it doesn’t disappoint. Those green spaces. and other locations, are decorated with statues, sculptures, fountains and urns, some of them imported from foreign lands.

Located along the Ohio River, which separates Kentucky and Indiana, Indian Hills is a suburb of Louisville. There is a pride of ownership in Indian Hills, where 99.3% of homes are owner-occupied, according to Lenihan Sotheby’s International Realty.

Even Louisianans who don’t live in Prairieville might have been there, drawn by the Flea Market of Louisiana. It has 400 covered booths and is open weekends throughout the year, rain or shine.

Cumberland Center is one of three distinct areas within the Town of Cumberland. On the coast of Southern Maine, Cumberland still retains its rich agricultural roots, which are showcased each September at the Cumberland Fair.

Travilah is known for its big houses on big plots of land. It’s a bedroom community of Washington, D.C., about 20 miles north along the Potomac River.

Read More: LeBron James, David Beckham and the Richest Athletes In The World

Bloomfield Hills is known, in part, as the home of the Cranbrook Institute of Science. Founded in 1904, it is a nationally known science center, observatory, artifact museum and research hub.

The master-planned North Oaks community is rare in that it is governed by both the City of North Oaks and the North Oaks Home Owners’ Association. The city takes care of services such as police, fire and planning; the association oversees recreational programs, facilities and road maintenance. All of North Oaks’ roads are privately owned.

Madison is a spot for both young families and retirees. While almost 28% of the residents are under age 18, Madison also is a certified retirement community. As such, it offers educational, cultural and recreational programs for its older residents.

A suburb of St. Louis, Frontenac became a city in November 1950. It attracted horse lovers, many of whom built stables, and the community maintains its equestrian history through its street names. Today, people are drawn to the area to shop at Plaza Frontenac, which consists largely of high-end stores, including Saks Fifth Avenue and Neiman Marcus.

Spring Creek is far removed, both literally and figuratively, from Las Vegas. Unlike the glitzy city about 420 miles south, Spring Creek is a rural community, where family activities such as canoeing are the main attraction.

Nestled along New Hampshire’s western border, Hanover is the home of Dartmouth University. It’s one of just 10 towns in the United States where the Appalachian Trail runs down Main Street.

Short Hills, part of the Town of Millburn, is accessible for commuters. It’s 10 miles from Newark, New Jersey, and about 25 miles from Manhattan. Philadelphia is about 90 miles away.

White Rock is located in Los Alamos County, which in June 2021 was named the No. 1 Healthiest Community in the United States by U.S. News & World Report in partnership with the Aetna Foundation. The study looked at 84 health and related metrics in 10 categories and analyzed about 3,000 locations.

Located 45 miles apart, Scarsdale is a tony community northeast of Manhattan near the Connecticut border, while Lloyd Harbor is on Long Island. In June 2021, the median home listing price in Scarsdale was $1.2 million, according to Realtor.com. In Lloyd Harbor, it was $1.7 million.

If a home on a big lot is what you want, the Charlotte suburb could be your destiny. Under Marvin zoning regulations, no more than 86 homes can be built per 100 acres. The village was incorporated in 1994.

Beulah is a rural community with rolling hills and farming. But it’s also rich in coal and bills itself as the Energy Capital of North Dakota.

Indian Hill is a quiet residential community in Hamilton County, Ohio, northeast of Cincinnati. It’s known for her large residential lots of three acres or more.

From the outset, Nichols Hills was designed to be an exclusive community. As developer Gilbert A. Nichols planned Nichols Hills, he wanted it to contain mansions on big lots. He got the idea from a colleague in real estate who suggested the area should be modeled after Beverly Hills, California.

Cedar Mill is a suburb of Portland and a short distance to Beaverton, where the world headquarters of Nike are located.

The wooded suburb of Pittsburgh features grand homes built by some of the nation’s wealthiest families, including the Heinzes and the Carnegies, and is 100% residential, except for schools, churches and private clubs.

Since Cumberland Hill is just 13 miles from Providence, residents have access to the big city while maintaining their small-town lifestyle.

Located along Lake Wylie, Tega Cay offers water activities such as boating and swimming, as well as golf and hiking.

Learn More: The Cost of Living Is Quickly Rising in These 20 US Cities

Residents of Dakota Dunes can live, work and play there. That’s because it’s a 2,000-acre master-planned community, started in 1988, that includes 434 acres set aside for offices, retail shops and light industrial activities, and nearly 1,000 acres for open space, public use and golf courses.

Forest Hills, a suburb of Nashville, has no commercial development and is nearly 100% residential. High-density housing isn’t allowed.

All three communities are located within 11 miles of each other west of Houston, which is the fourth-largest city in the United States.

Silver Summit, in Summit County, is northeast of Park City and its ski slopes, hiking and biking trails.

The Champlain Valley Fair is held each summer in Essex Junction. With more than 120,000 attendees each year, it is the state’s biggest event.

Great Falls is a Washington, D.C., bedroom community, but it’s also a destination. The National Park Service manages Great Falls Park, through which the Potomac River flows. The 800-acre park features waterfalls and rapids and is just 15 minutes from the capital city.

Clyde Hill is east of Seattle and offers views of some of the Pacific Northwest’s most spectacular sites, including Mount Rainier, the Olympic and Cascade mountains, Lake Washington and the Seattle skyline.

George Washington surveyed the area in the 1700s, envisioning using the Cheat River as a transportation system. Eventually, Lake Lynn was built in the area for hydroelectric power generation and renamed Cheat Lake in 1976, Homes have cropped up in the area, with residents taking advantage of both water views and activities.

Up Next: What a Million-Dollar Home Looks Like in the U.S.

Residents of Merton, in Waukesha County, enjoy fishing in five lakes, as well as parks, snowmobiling and hiking.

Ranchettes, in Laramie County, has pricey real estate. The average list price in June 2021 was $627,500, according to Realtor.com.

Morgan Quinn contributed to the reporting for this article.