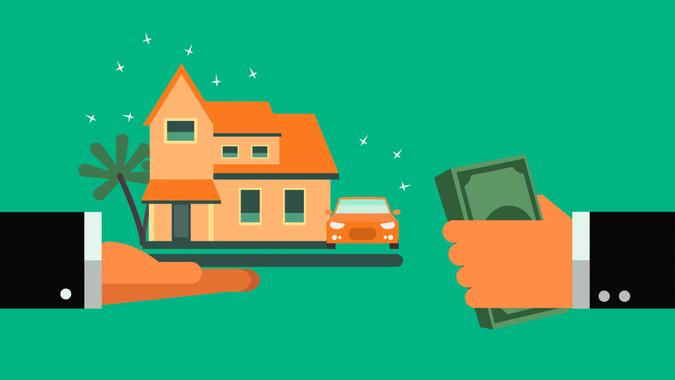 GOBankingRates conducted a survey of 500 renters and 500 homeowners over age 18 on May 10 to gather information about their general characteristics and future plans. One of the most interesting responses was to the question of what renters and homeowners would do if they were given $50,000 tomorrow to spend. As might be expected, the answers given by renters and homeowners to many questions were quite different, especially in terms of their priorities. Here’s a look at the highlights of the survey.

Follow Along: 31 Days of Living Richer
Find Out: This Is the Salary You Need To Afford the Average Home in Your State

Most renters, according to the survey, want to be homeowners at some point in the future, with nearly 80% of the women and over 75% of the men responding in the affirmative. However, this desire might conflict with the respondents’ own financial realities. An astonishing 35% of renters indicated they currently have $0 saved for a down payment for a house, with a whopping 74% of women indicating they had less than $10,000 saved. Yet, only about 27% of respondents indicated that the biggest impediment to buying a house was not being able to afford a down payment, in spite of the low amounts of money already saved. Poor credit, low wages and unaffordable home prices were three of the most popular reasons given for not being able to buy a house after not being able to afford a down payment.

Good To Know: States With the Highest Property Taxes

When renters were asked what they would do if they were given $50,000, the most popular answer, not surprisingly, was to put that money toward a down payment on a house. More than 46% of women and 37% of men selected this option. This lines up with the 78% of overall respondents who said they intended to buy a home someday. Other popular choices for the $50,000 included investing the money and paying off credit card debt, but those were far behind the top option at about 26% and 15%, respectively.

Be Prepared: What Homes Will Be Worth in Your State by the End of 2021

Homeowners have different financial priorities than renters, as they don’t need financial windfalls to afford a house. When offered $50,000, the most popular answer for homeowners was to invest that money, the favored choice for 34% of respondents. However, more than 23% indicated that they would put that money toward their mortgage, and more than 18% would finance a home improvement project. What some may find interesting is that more homeowners would choose to pay down their various debts rather than potentially improving their home value through a well-done renovation.

See: 50 Cities Where It’s Cheaper To Buy a Home Than Rent

In a sign that seems to imply buying a home may be a better deal than renting, just 15.40% of homeowners indicated they spent more than 50% of their income on housing. This is in contrast to 25.20% of renters who noted the same. This could be due to the fact that homeowners overall have a high average income, but it could also mean that with a large enough down payment, mortgages can be more affordable in terms of monthly cash flow than rent in certain markets.

Prefer To Build? Most and Least Expensive States to Build a Home

For renters: GOBankingRates surveyed 500 Americans aged 18 and older from across the country on May 10, 2021, asking six different questions: (1) Do you want to own a home at some point in the future?; (2) When do you believe you will be able to afford owning a home?; (3) If given $50,000 tomorrow how would you spend the newfound money?; (4) What is the greatest barrier that is preventing you from being able to own a home?; (5) How much do you currently have saved for a down payment on a home?; and (6) How much of your current monthly salary is going towards rent? (Select the closest figure). All respondents had to pass a screener question of: Do you currently Rent or Own your residence?, with an answer of “Rent”. GOBankingRates used PureSpectrum’s survey platform to conduct the poll.

For homeowners: GOBankingRates surveyed 500 Americans aged 18 and older from across the country on May 10, 2021, asking six different questions: (1) At what age did you first become a homeowner?; (2) How much did you put towards your down payment?; (3) How much of your current monthly salary is going towards housing? (Select the closest figure); (4) If given $50,000 tomorrow how would you spend the new found money?; (5) Are you more likely to renovate your current home or buy a new home?; and (6) Have you re-financed your mortgage recently?. All respondents had to pass a screener question of: Do you currently Rent or Own your residence?, with an answer of “Own (including paying off mortgage)”. GOBankingRates used PureSpectrum’s survey platform to conduct the poll.