The Average Millennial Now Has More Than $100K in Debt: 3 Tips for Paying It Off 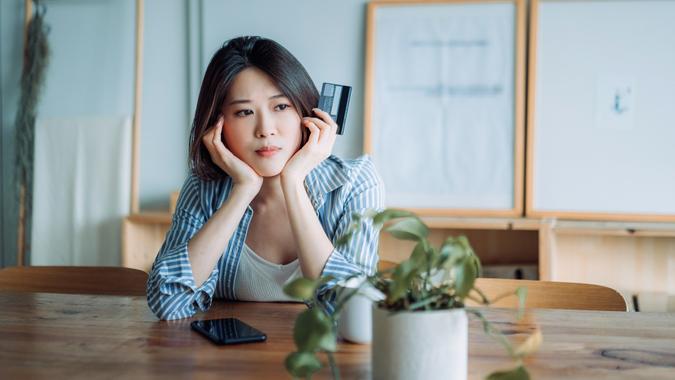 No one likes being in debt, but that’s the reality for most millennials. A recent survey conducted by Real Estate Witch found that a whopping 72% of millennials have non-mortgage debt. Even more alarming is the high level of debt held by millennials — the survey found that the average millennial currently owes $117,000.

The Future of Finances: Gen Z & How They Relate to Money
Learn: This Credit Score Mistake Could Be Costing Millions of Americans

Here’s a look at why this generation has so much debt, and what they can do to get out of it.

The Realities of a Generation in Debt

The average millennial now has six figures worth of debt, and the survey found that this is spread across all kinds of debts. According to the data, 67% of the millennials have credit card debt, 48% have student loans, 42% have personal loans, 42% have medical debt, 40% have an auto loan and 33% have a mortgage.

Despite their high levels of debt, most millennials (63%) believe they will be able to pay off their debts in one to five years. However, for someone who owes $117,000, this will likely be very difficult.

“It is very, very tough to pay off six figures in debt within five years, especially if you are prioritizing your mental health and overall well-being,” said Danetha Doe, chief economist at Clever Real Estate. “My hope is that the folks we surveyed are not sending the message that they are sacrificing their health to pay down debt.”

Whatever their approach to paying off debt may be, it’s clear that debt is taking a toll on this generation’s mental health. The survey found that 41% of millennials feel pessimistic about their finances and 32% regret going into debt.

Most Millennials Have Credit Card Debt

“Contrary to popular belief, it is not avocado toast,” Doe said. “Millennials are using credit cards to pay for everyday living expenses. Some of the credit card debt may be from decisions they made when they were much younger that they carry with them today. They may also be transferring some of their debt, such as medical or student loans, to credit cards.”

The survey found that the average amount of credit card debt held by millennials is $5,349.

Nearly Half of Millennials Have Student Loan Debt

“The cost of education has skyrocketed,” Doe said. “Ronald Reagan’s economic decision during the 1980s to cut funding to schools had a ripple effect on this generation. The funding cut meant students had to pay more for their education. Additionally, universities chose to increase tuition costs faster than the rise in salaries/wages and inflation. In some cases, a school’s tuition has risen over 200% over the course of 30 years. Also, financial aid has not been made accessible to everyone, even to those who truly need it. Millennials have taken the brunt of this cost increase.”

Tips for Paying Off Debt

Paying off debt — especially if you have six figures or more in debt — is challenging, but with the right strategy, it’s possible. Doe recommends taking the following steps: