Bryce Harper signed the biggest contract in MLB history on Feb. 28 when he agreed to play for the Philadelphia Phillies. The superstar outfielder leased himself for 13 years and $330 million. The deal breaks Giancarlo Stanton’s record of $325 million and eclipses Manny Machado’s record for the biggest free-agent contract in MLB history by $30 million.

Harper’s been making waves in the baseball community for some time now. Regarded by some as “the most prized free agent in baseball history,” according to NBC News, he’s finally found a home in Pennsylvania. And given how the contract doesn’t include an opt-out clause, that could make the Phillies the team Harper retires from.

Keep reading to see how much Harper is worth.

Bryce Harper’s net worth is $50 million, according to Celebrity Net Worth. That figure is very likely to increase over the years, as Harper begins to enjoy his new salary. With his record-breaking contract, Harper’s estimated annual income would be around $25.38 million.

Harper is valuable as both a commodity and a player. “The Nationals will receive a 2019 supplemental first round draft pick as compensation for losing Harper, who rejected the $17.9 million qualifying offer earlier this winter,” CBS Sports reported. “Because they did not pay luxury tax in 2018, the Phillies only have to forfeit their 2019 second round draft pick to sign Harper.”

Sports Illustrated profiled a young Bryce Harper nearly a decade ago. Calling him “baseball’s LeBron,” the piece mentioned that, at age 16, Harper was able to hit a ball 570 feet and throw pitches that nearly broke 100 mph.

At age 17, Harper showed up his fellow players at the College of Southern Nevada, resulting in him being the No. 1 pick in the 2010 MLB draft. He is only the third slugger to sign a contract over $300 million, the other two being Stanton and Machado. 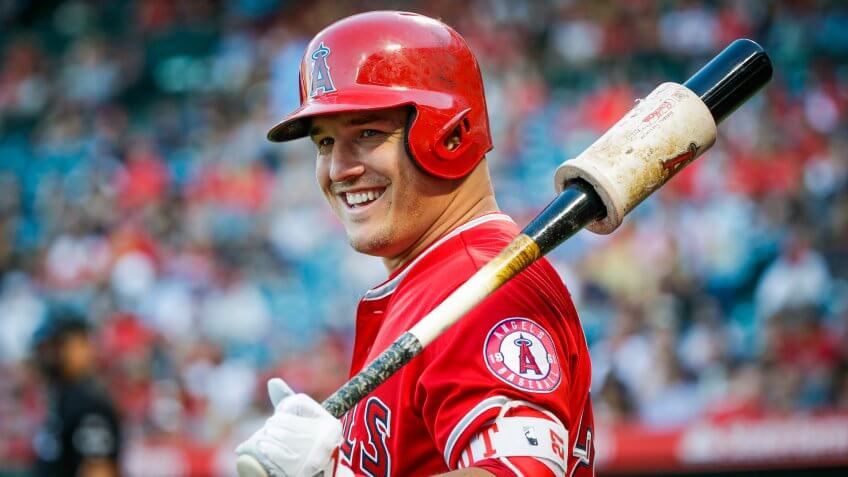 Mike Trout Is Poised to Sign the Biggest Sports Contract Ever —

Trout could become the most well-paid athlete in the U.S.