How Much Do You Win for Winning the Kentucky Derby? 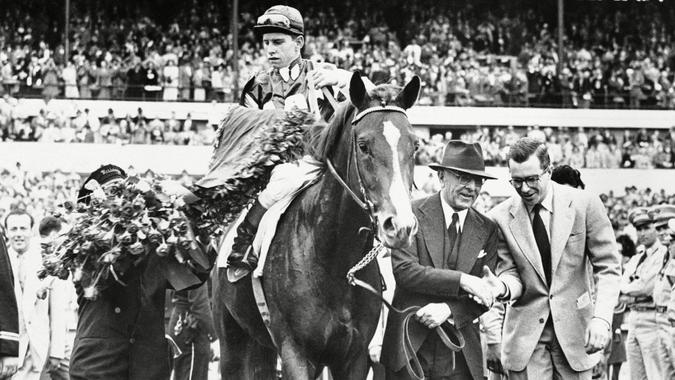 The Kentucky Derby is considered the premium jewel in the Triple Crown of horse racing, the highest-profile race of the year.

In addition to the fame of being called “Kentucky Derby champion” and winning a garland of roses, the owner of the first-place winner takes home a hefty payday.

Find: 22 Side Gigs That Can Make You Richer Than a Full-Time Job
Learn: 10 Reasons You Should Claim Social Security Early

See how much the winner(s) of the Kentucky Derby get.

Winning Owner Takes More Than Half the $3 Million Purse

The Kentucky Derby has the highest payout of the three Triple Crown races. The Preakness Stakes pays out $1.5 million, while the Belmont Stakes offers $1 million.

What About the Individual Bettor?

Wagering at Churchill Downs soared to $155.4 million in 2021, the Louisville Courier-Journal reported. That’s an 85% increase from the year before, which was affected by the pandemic. That doesn’t include online sportsbooks or other legal sports betting. BoydsBets.com estimates that Las Vegas sportsbooks bring in an addition $11 million to $16.6 million for each Derby.

The Derby offers plenty of options for you to bet, from a straight win-place-show bet to more exotic wagers, such as an exacta, trifecta or superfecta (picking the top two, three or four finishers).

More on the Money of the Derby

The Kentucky Derby is big business. And it has grown along with the economy over the decades. See all the rest of GOBankingRates’ content on the Derby:

Some bettors have used those exotics to take home some significant cash.

In 2019, a Las Vegas bettor reportedly won $102,000 on $8 in superfecta bets. He got lucky when Country House, a 65/1 longshot, won the Derby after apparent winner Maximum Security was disqualified.

In 2018, a Texas woman won about 10 times that amount. She bet $18 on a Pick 5 and nailed the winner of the Derby, Justify, and the top horses in the four races leading up the Derby. She walked away with $1.2 million.