Financial Literacy: How To Teach Your Children About Saving for Retirement Even If You Struggle 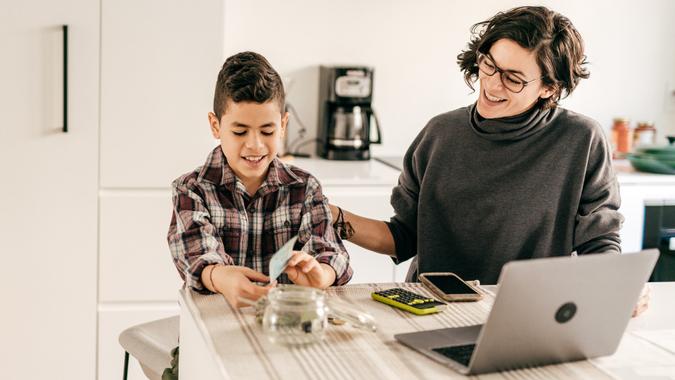 File this one under “do as I say, not as I do:” If you’re struggling to save for retirement, either out of bad habits or bad luck, you can still impart valuable lessons to your children that can help them establish a solid foundation for retirement planning and saving.

Social Security Schedule: When Benefits Will Arrive in May 2022
Explore: 27 Ugly Truths About Retirement

The first step you should take, especially for younger children, is to teach them the concept of earning money, according to the Empower financial website. This might sound obvious to adults, but children don’t come out of the womb knowing about the importance of getting a job and making a living.

Start your kids out early by paying them for doing certain chores around the house. This doesn’t necessarily mean paying an allowance, because some chores should be considered part of growing up (making the bed, clearing the table, etc.). Instead, point out that the money they earn is for specific chores that go beyond what’s expected of them.

Whenever possible, invite your kids to tag along to your job so they can see how the working world operates. When they have built up enough knowledge, you can begin asking them about careers they might one day want to pursue and advising them on how they can position themselves to succeed in those fields.

It’s also important to teach your children the difference between wanting something and needing something. This essentially boils down to letting them know they will always need the basics — food, shelter, clothing, health care, etc. — and will probably need certain gadgets to succeed in the world (computers, cell phones).

Teach them to budget for essential items first. After that, teach them to set aside a certain percentage of whatever is left over for savings — first emergency savings, and then retirement savings. Early on in their lives, this might take the form of having your kids save for an expensive item so they can buy it themselves. Have them get into the habit of setting aside one fund for spending and the other for saving.

When your kids get older — high school and up — it’s time to start building financial expectations. Citizens Bank recommended first acknowledging the financial challenges they will face. For young people emerging from school and into the working world, this could range from building savings from a starting point of zero to dealing with thousands of dollars in student debt.

Citizens Bank also recommended explaining that planning for the future doesn’t mean abandoning the present. This goes back to the idea of setting up separate funds for spending and saving — but only after the essential bills are paid. The spending fund can go toward entertainment, while the savings fund can be broken down into rainy-day savings and retirement savings.

This is a good time to also teach your kids about the power of compound interest — and the importance of saving early to ensure the interest they earn has a long time to compound and build up. As Citizens Bank noted, setting aside $250 a month beginning at the age of 25 can leave you with twice as much money by age 65 than you would earn if you waited until age 35 to begin saving.

The most important lesson you can impart is that saving money should become a habit, something that becomes such a regular part of your kids’ lives at an early age that they don’t even have to think about it. This requires the discipline to get started in the first place and the commitment to stay at it for decades.

Experts: Here’s How Much You Should Have in Your Retirement Account at Every Stage of Life
Find: 6 Best Retirement Investing Strategies for Gen Z Workers

Even if you personally haven’t followed the rules as diligently as you could have, the ups and downs you’ve experienced can provide valuable insights into what your children should and shouldn’t do when it comes to retirement savings.