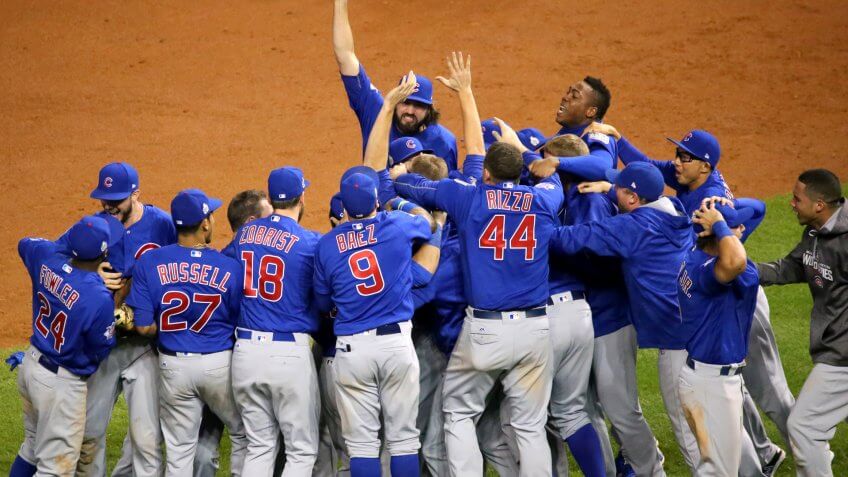 The Los Angeles Dodgers have repeatedly come up short in the playoffs, even as their status as the team with the highest payroll in baseball remained consistent over the last four seasons. This year, the Dodgers broke through, returning to the World Series for the first time since 1988. The Astros were in the World Series much more recently, making it in 2005. Since then the team has endured a protracted rebuilding period. In 2013 the Astros lost 111 games and only had a total payroll of $26 million.

The Astros’ rebuilding plan paid off, just like the Dodgers’ spending plan did. So, which team has a better chance of winning the World Series? GOBankingRates examined the payrolls of every World Series team dating back to the turn of the millennium, using data from Baseball Prospectus. Historical figures can tell a lot about the chances of this year’s teams. 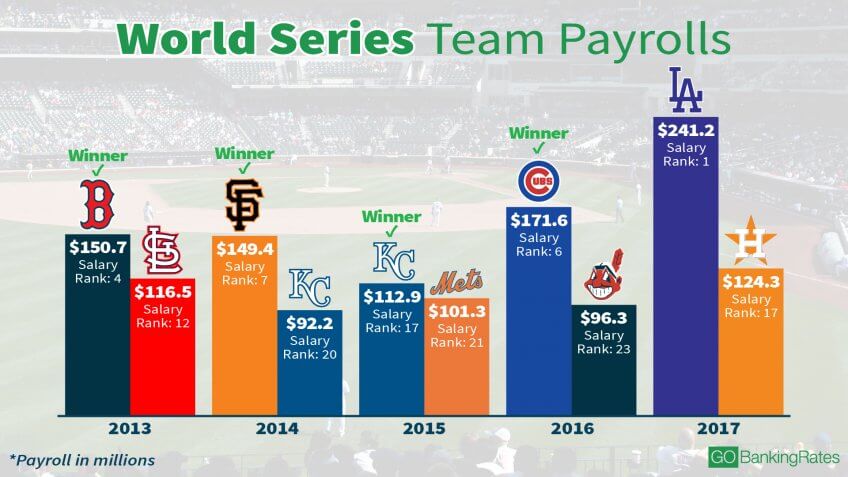 On the face of it, the Houston Astros don’t have much of a chance in this year’s series. They have the 17th-highest payroll in baseball, while the Dodgers are No. 1 in payroll by a wide margin — paying $42 million more total than the next-highest team. The team with the higher payroll has won the past four World Series, and 12 of the last 17. Overall, since 2000, the winning team has had an average salary ranking of 8.9, while the losing team has had a ranking of 13.6. Click through to see how payrolls compare from 2000 to today. 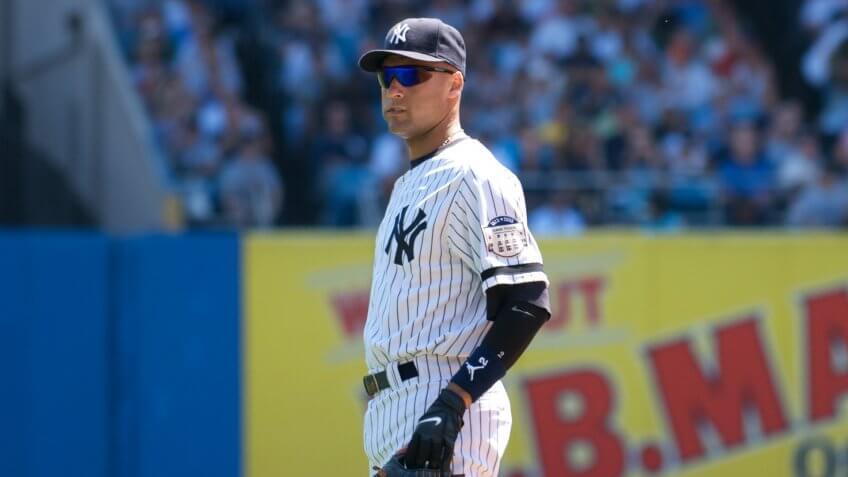 With a payroll of nearly $92.33 million, the New York Yankees spent more than any team in baseball during the first year of the 21st century. Apparently, they got what they paid for. That year, the Yankees beat their crosstown rivals, the New York Mets, four games to one to win the World Series.

The Mets also paid a pretty penny to get to the Series that year. Their payroll was nearly $79.45 million, the sixth-highest in the league. 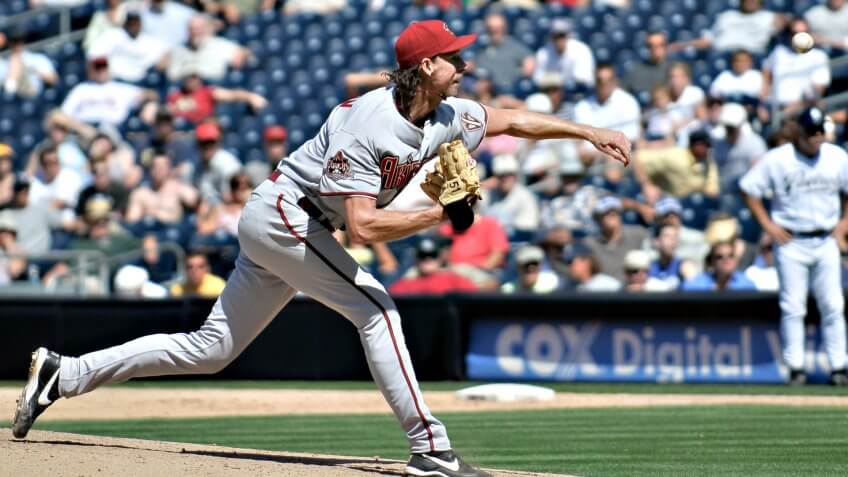 In 2001, the Arizona Diamondbacks outspent all but seven teams on their road to a World Series victory. Their payroll that year was $85.08 million, enough to beat the defending champion New York Yankees.

The Yanks were the league’s second-highest spenders, shelling out $111.16 million. Although they forced a Game 7, the Bronx Bombers discovered that victory wasn’t for sale. That year’s MVP was pitcher Curt Schilling, who has an estimated net worth of $1 million. 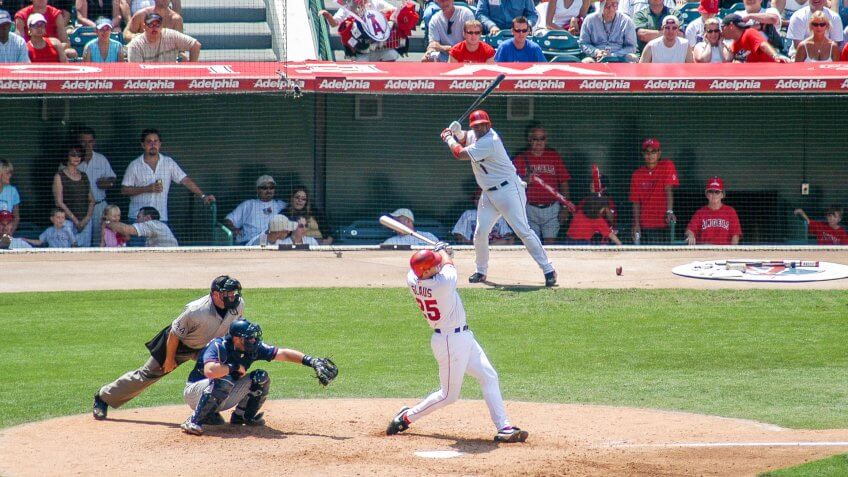 The 2002 World Series also went to Game 7, this time with the Angels (who are now the Los Angeles Angels of Anaheim) beating fellow Californians the San Francisco Giants four games to three. The Angels, whose SoCal stadium is one of the cheapest places to take in a ball game, were in the middle of the MLB pack that year, with the No. 15 payroll totaling $61.41 million. 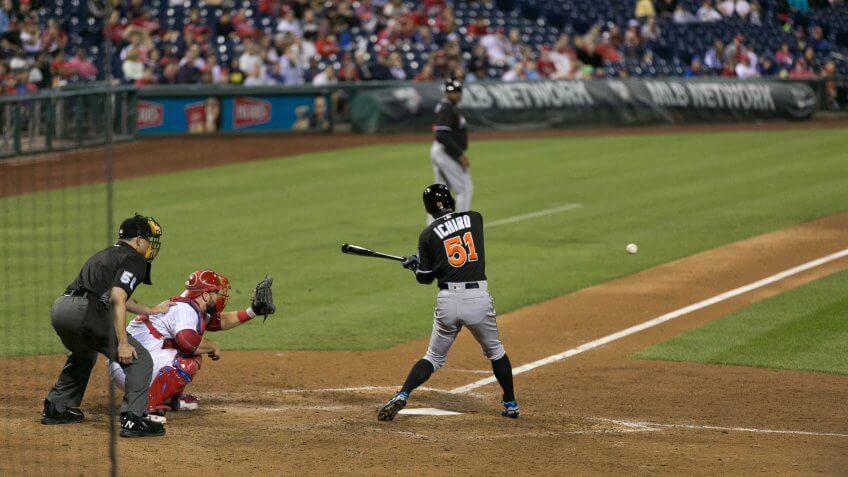 In 2003, the Yankees played in the World Series yet again. This time, however, they played Goliath to the Florida Marlins’ David, falling four games to two.

The Yanks outspent every other team in the MLB with a payroll topping $153.77 million — more than $35 million ahead of the next-highest spender. The Marlins, on the other hand, spent fewer dollars than all but five other teams. Their $47.85 million payroll was less than one-third of that spent by their pinstriped rivals.

Marlins pitcher Josh Beckett took home that year’s Series MVP. Over the course of his career, Beckett would go on to earn nearly $125 million on the field. 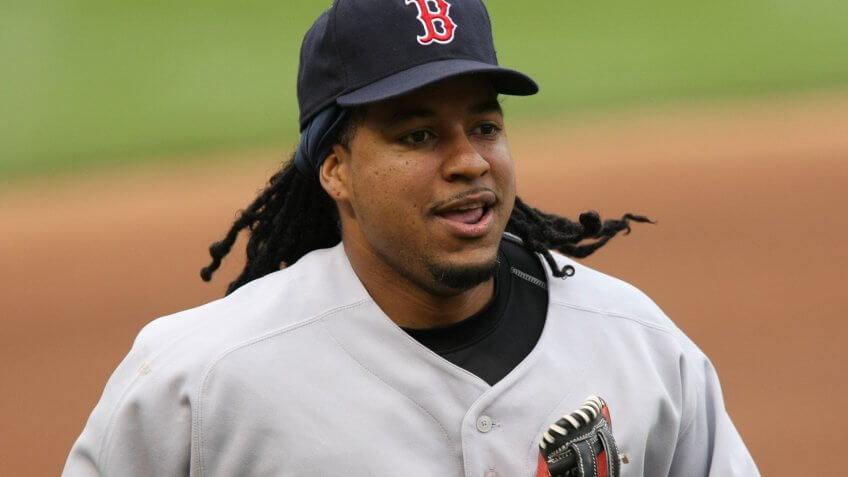 The Sox’s Manny Ramirez took home the series MVP after homering twice and hitting for .350. Over the course of his two-decade career, Ramirez would earn nearly a quarter billion dollars with a lifetime salary of more than $223.36 million. 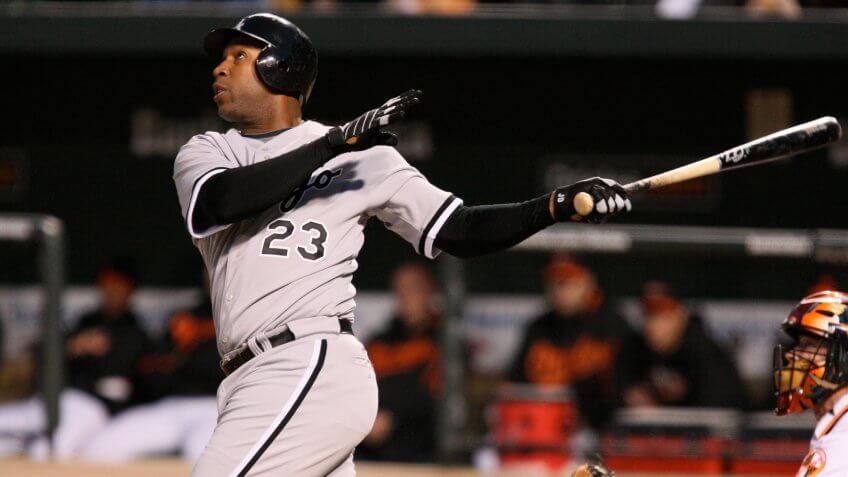 In 2005, a different Sox franchise pulled off a sweep of their own in the World Series. This time, it was Chicago dominating the Houston Astros. Although they were mismatched on the field, the teams’ budgets were nearly identical. The Sox and the Astros had the No. 13 and No. 12 payrolls, with the teams spending nearly $75.7 million and $78.8 million, respectively.

Jermaine Dye earned the Series MVP after tallying six RBIs and one home run. Over the course of his 14-year career, Dye would go on to earn more than $78.37 million. 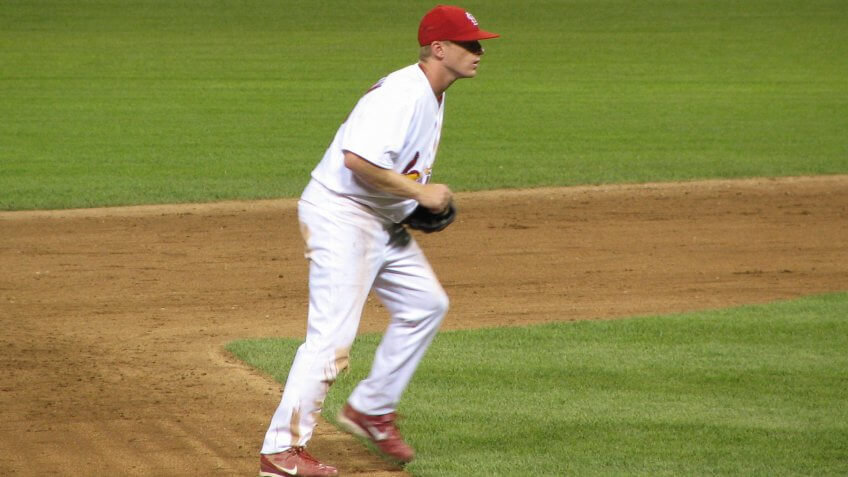 In 2006, St. Louis clobbered the Detroit Tigers four games to one. St. Louis had the 11th-highest payroll in baseball that year at just under $89.1 million. Detroit was three spots back with a payroll of just under $85.2 million.

That year’s Series MVP was David Eckstein, who batted in six runs. After a decade in the MLB, Eckstein earned just shy of $20 million.

Merchandise Worth Your Money: The Best and Worst Things to Buy at an MLB Game 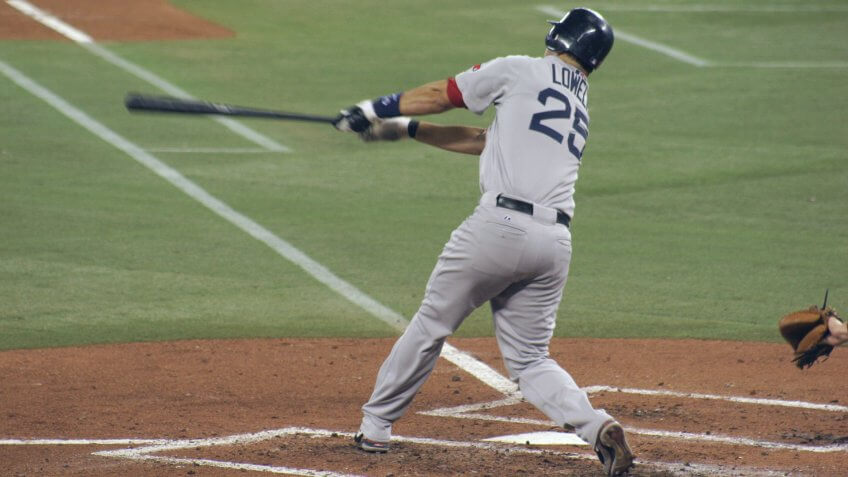 In 2007, the Boston Red Sox earned their second 4-0 World Series sweep victory in four seasons, this time shutting out the Colorado Rockies. With a payroll of nearly $147.57 million, the Sox were the second-highest spenders in the league behind not surprisingly, the Yankees.

The Rockies were woefully outspent. Coming in at No. 25, their payroll was a little over $57 million. That year’s Series MVP, Mike Lowell, earned nearly $76.5 million over the course of his career, with his final three years bringing annual paychecks of $12 million. 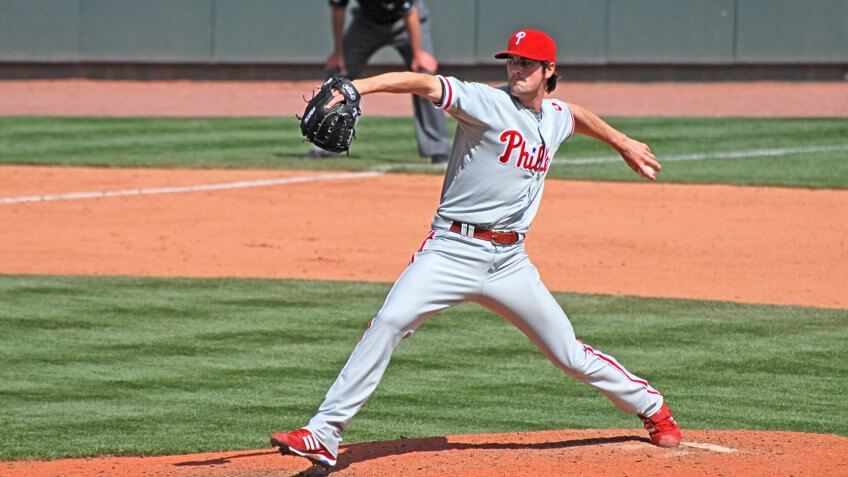 The Philadelphia Phillies emerged victorious from the 2008 World Series with a lopsided 4-1 win over the Tampa Bay Rays. The Phillies were the 12th-highest spending team with a payroll a little short of $100.54 million.

Tampa Bay was near the bottom of the pack, ranking No. 28 out of 30 teams. Their payroll was limited to a little more than $47.12 million, less than half that of their opponents. Pitcher Cole Hamels was named the Series MVP. By the time Hamels’ contract is up in 2019, he’ll have earned $182.78 million in salary. 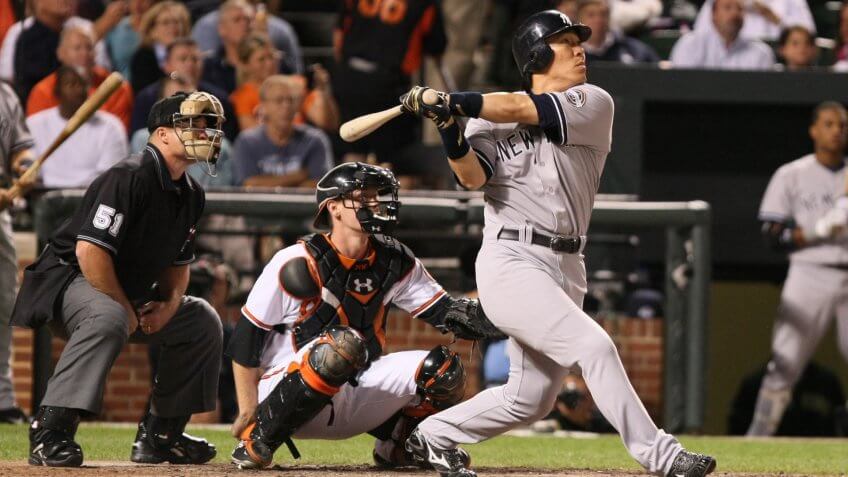 The Phillies returned to the World Series in 2009. This time, however, they went home empty-handed after losing four games to two to a familiar World Series face — the New York Yankees.

The Yanks, once again, were the biggest spenders in the league, boasting a payroll of nearly $203.28 million. The Phils weren’t too far back. Their $137.84 million payroll landed them in fourth place in the MLB.

Hideki Matsui’s four home runs and 13 RBIs earned him the title of Series MVP. Matsui’s net worth is $40 million. 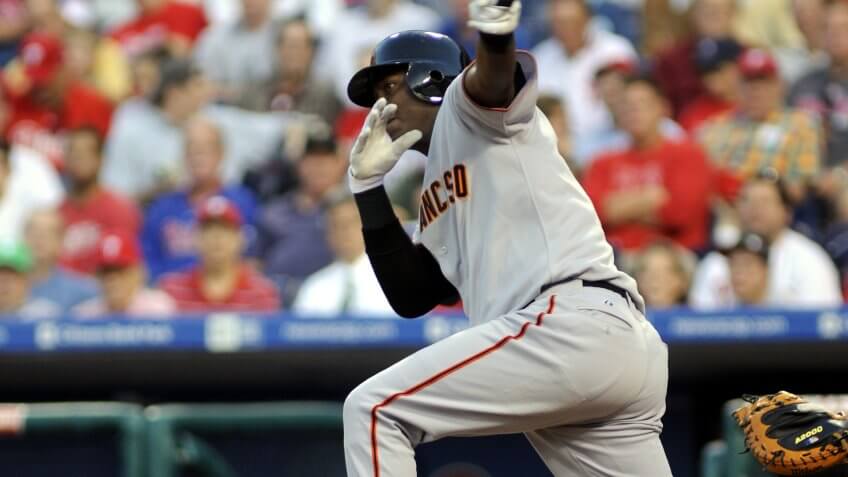 In 2010, the San Francisco Giants returned to the World Series, only this time they pulled it off by beating the Texas Rangers four games to one. The Giants ranked No. 11 with a payroll of a little over $97 million. With a payroll just short of $58.5 million, the Rangers were on the other end of the MLB spectrum with the No. 26 spot.

Edgar Renteria had a stellar performance at the plate, earning him the World Series MVP title. Renteria earned more than $85.04 million in his 16 years in the MLB.

No Baseball Players on This List: The Giant Endorsement Deals for the World’s Best Athletes 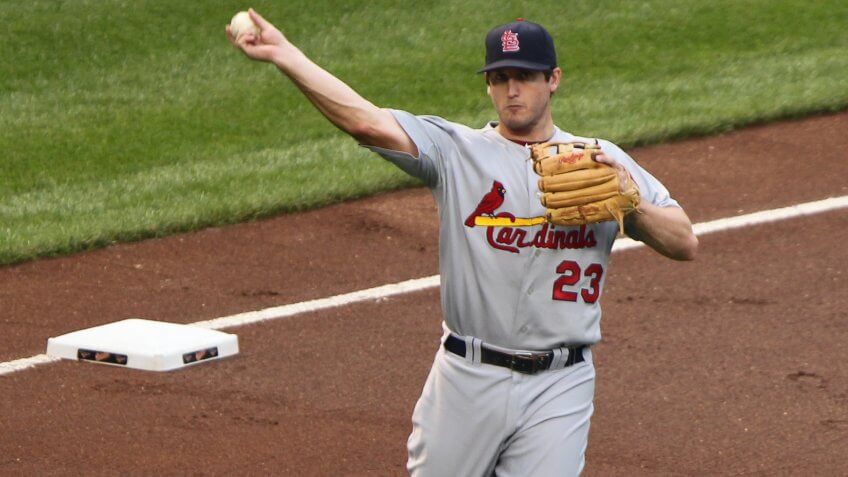 The Texas Rangers returned to the World Series in 2011 and, again, came up empty. This time they dropped a 4-3 nail-biter to the Cardinals. With a payroll of $109.8 million, the Cards had the 10th-deepest pockets in the league. Flush from the prior year’s Series try, the Rangers moved up to No. 13 with a payroll of $96.71 million.

With a superhuman Series average of .397 and a staggering 21 RBIs, David Freese earned the title of MVP. By the time his contract is up in 2019, David Freese will have earned $30.36 million on the field. 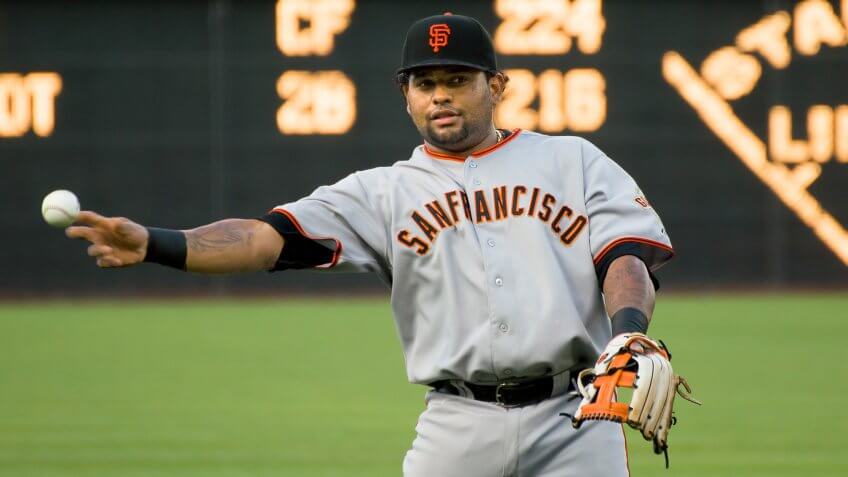 In 2012, the Giants returned to the World Series and beat the Detroit Lions in a brutal 4-0 sweep. San Francisco had a payroll of nearly $132 million, ranking No. 6 in the league. Detroit was one spot ahead with a budget of $133.06.

That year, Pablo Sandoval was named the Series MVP. When Sandoval’s contract is up in 2020, he’ll have banked more than $113.5 million. 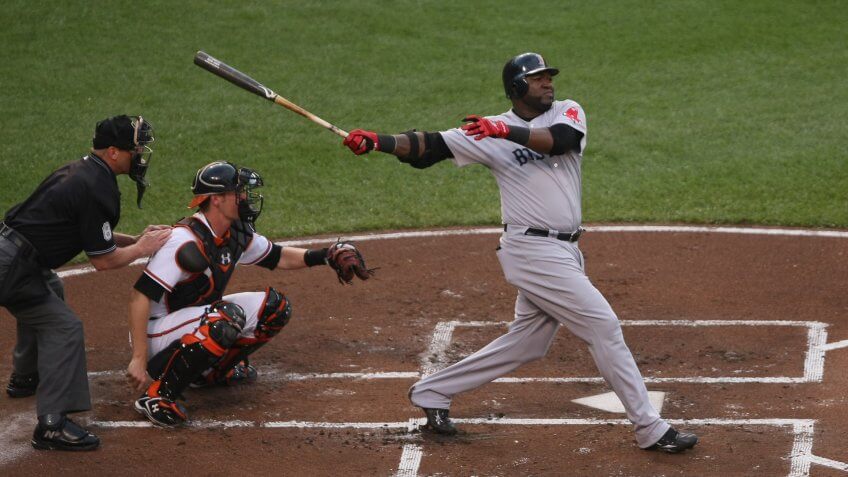 In 2013, the Red Sox defeated the perennial contender St. Louis Cardinals in a 4-2 series. Boston’s $150.66 million payroll was the fourth highest in the league that year. The Cardinals were in 12th place with $116.5 million. 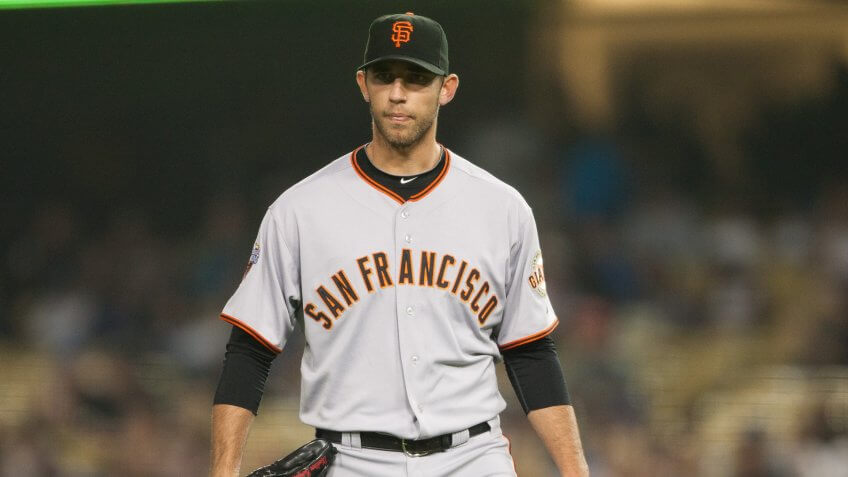 In 2014, the San Francisco Giants found themselves in a familiar position — playing in the MLB World Series. This time, they defeated the Kansas City Royals 4-3 in a seven-game nail-biter. The Giants spent more than all but six teams that year, with a payroll of $149.44 million. The Royals, on the other hand, were No. 20, with a payroll of just $92.19 million.

That year was Madison Bumgarner’s turn to shine, and he earned the title of Series MVP. When the pitcher’s contract is up after 2018, he’ll have made $38.5 million.

The Giants might have had a down season this year, but after winning three championships over a five-year stretch, they’re still one of the best baseball teams for your money. 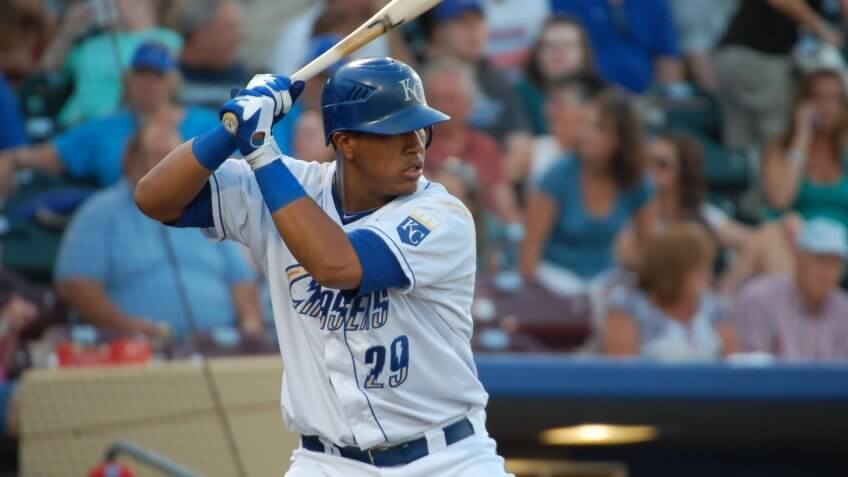 In 2015, the Royals returned to the World Series, and this time they would not be denied. They beat the New York Mets, who were all the way back at No. 21 with a payroll of $101.34 million. Just four spots ahead, the Royals had a payroll of $112.86 million.

With four home runs and eight RBIs, Salvador Perez earned the title of Series MVP. When Perez’s contract is up in 2021, the catcher will have earned a salary totaling $60.23 million. 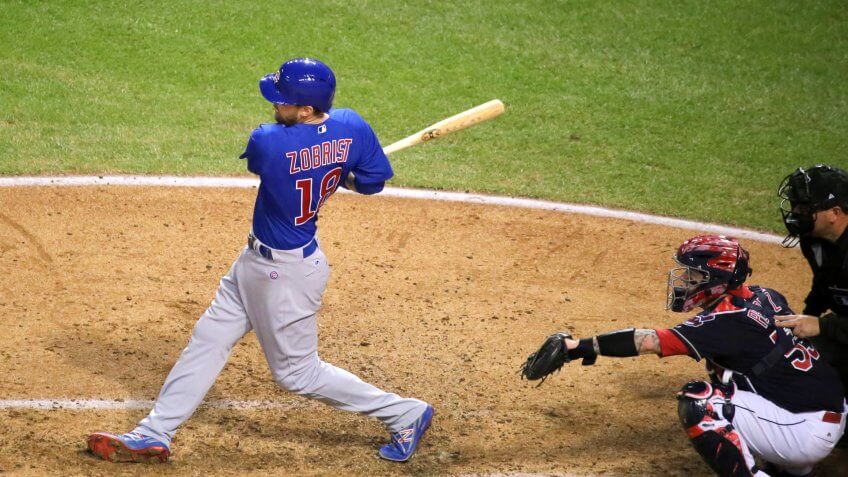 In 2016, the Cubs broke a multi-generational curse when they beat the Cleveland Indians in a white-knuckled 4-3 series. Coming in at No. 23, the Indians had a payroll of $96.3 million. The Cubs were the more well-heeled club, with a payroll of $171.61 million — more than all but five other teams.

Ben Zobrist earned the title of Series MVP with five RBIs. When Zobrist emerges from his current contract, which takes him through 2019, he’ll have earned nearly $87.2 million. 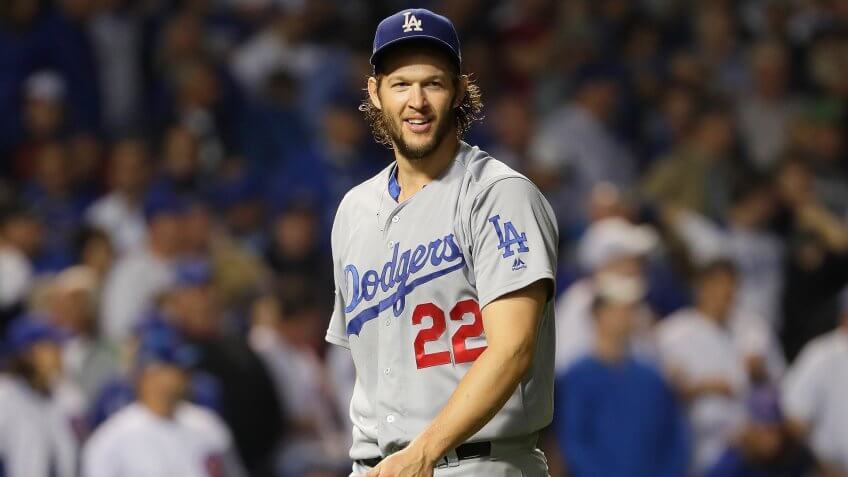 The Dodgers are back to the World Series for the first time since winning it in 1988. They lost the National League Championship series to the Chicago Cubs last year, but won it in dominating fashion this time around, beating the Cubs 4-1 in the series. The Dodgers, with the highest payroll, outpaid the Cubs, with the sixth-highest payroll, $241.15 million to $172.2 million.

Clayton Kershaw, the long-time face of the franchise and the highest-paid player in the league, will start Game 1 against the Astros. 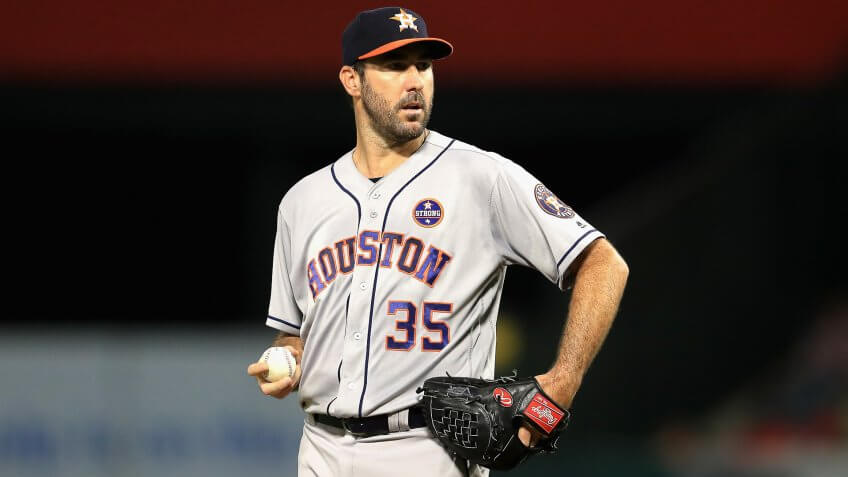 The Astros are in the World Series just four years after they were the worst team in baseball — by a wide margin. In 2013 the Astros were 45 games out of first place in their division, and this year they dominated, ending in first place by 21 games. The Astros beat the New York Yankees 4-3 in the Championship Series, where the home team won each time. The Yankees had the fourth-highest payroll this year, paying players $196.39 million. The Astros were 17th with a payroll of $124.34 million.

Justin Verlander, who won his two starts in the Championship series and was awarded the series MVP award, will start Game 2 against the Dodgers.

Up Next: Here’s How Much It Will Cost You to See a Game at These Must-See Stadiums Across America 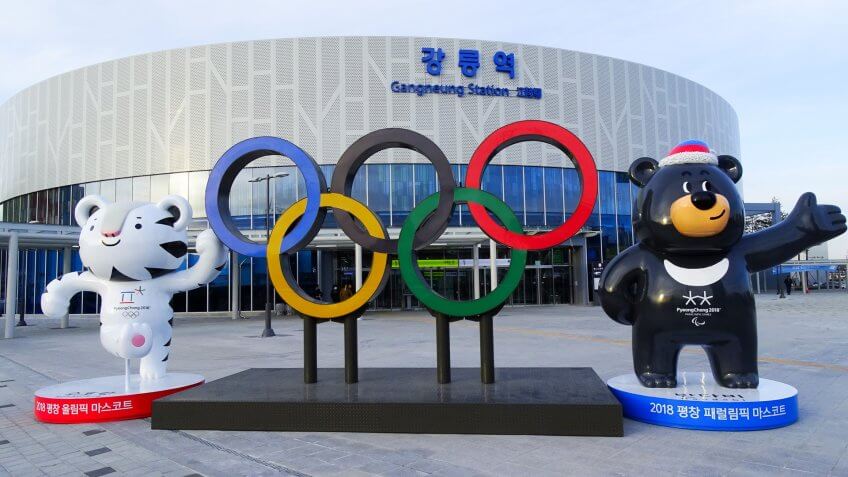 Here’s What It Costs to Attend the Winter Olympics 2018

See what it would've cost to get to the 2018 Winter Olympics.