When the latest Disney movie “Moana” hits theaters Nov. 23, Dwayne “The Rock” Johnson will play the voice of heroic demi-god Maui, who helps a young woman save her people from destruction.

Maui is a fitting role for The Rock. The character is a powerful, heavily-tattooed Pacific Islander — and so is Dwayne Johnson. The actor is, after all, the most famous member of the legendary Anoa’i family, a long-reigning dynasty of Samoan wrestlers who all hail from the same lineage. A powerful physique is undoubtedly part of Johnson’s DNA, but you’ll likely be surprised when you smell what The Rock is cooking — and eating raw — in order to maintain his muscle mass.

The U.S. Department of Agriculture offers dietary recommendations based on age, gender and lifestyle. It recommends moderately-active men in the 41-to-45 age range consume 2,600 calories per day. For an active, 44-year-old male — the same age as Johnson — the National Agricultural Library recommends between 65 and 114 grams of fat; 60 grams of protein; and between 331 and 478 grams of carbohydrates in a near-3,000 calorie per day diet.

The 6-foot-5-inch tall, 260-pound Johnson has to eat slightly more than the USDA recommends to sustain his 50-inch chest and 20-inch biceps.

He consumes 821 pounds of cod — more than a third of a ton — every year, reported FiveThirtyEight. That amounts to 1,000 calories of fish every day. Annually, he spends about $1,400 on cod, assuming wholesale pricing. But fish isn’t the only thing The Rock is cooking.

The famed actor eats seven meals a day for a combined 5,165 calories, or 10 pounds of food every 24 hours. Muscle & Fitness reported that, in addition to 36 ounces of cod, Johnson eats 8 ounces of chicken; 8 ounces of steak; a 10 egg-white omelet; 12 ounces of sweet potato; and a 12 ounce baked potato, among other fixings — every day.

The Cost of The Rock’s Diet

Sean Evans of Complex called The Rock’s diet a “part-time job.” When FiveThirtyEight followed the progress of an average person who attempted to emulate The Rock’s eating habits for a month, they discovered that the routine is “exhausting” and “expensive.” No kidding.

The meal plan cost the imitator $1,262 in a single month on food alone, more than double what the average American spends. To boot, Johnson also takes large quantities of expensive supplements. Eating like The Rock costs about $42 a day, more than half of which goes to cod.

What The Rock Eats When He Bulks

Sometimes, The Rock needs to bulk. When he gained weight for the role of Hobbs in “Fast 8,” the next film in the Fast & Furious franchise, Johnson put on an extra 22 pounds of muscle. He increased his calorie intake to 6,000 per day. One breakfast he posted to Instagram included 80 grams of Cream of Wheat, grass-fed buffalo and whole eggs.

For the role of the son of Zeus in “Hercules,” Johnson told BodyBuilding.com that he went on a 22-week diet that included filet mignon, asparagus, cream of rice, broccoli, oatmeal, baked potatoes, eggs and chicken.

When The Rock Cheats, He Really Cheats

Johnson is renowned throughout the fitness world for his fanatical dedication to his intense exercise regimen and diet. But even The Rock has to take a day off every once in a while.

After four months of training to get in shape for his role in “Central Intelligence,” Johnson posted to Instagram his cheat meal: a plate stacked with peanut butter brownies and cinnamon buns. While promoting “G.I. Joe: Retaliation” on ABC News, he shared his cheat day diet:

The Rock is anything but average. The WWE superstar turned Hollywood A-lister burns 3,550 calories a day through his unforgiving exercise routine, which includes one hour of cardio and an hour and a half of weight training six days a week. His diet is big enough to keep pace with his supersized workout regimen, career and starpower. 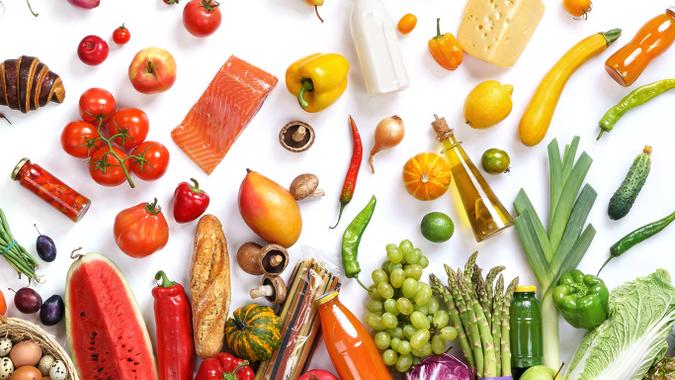 Top 11 Affordable Food Trends to Watch for in 2017

Check out the upcoming food trends that have the potential to affect your meals in 2017.