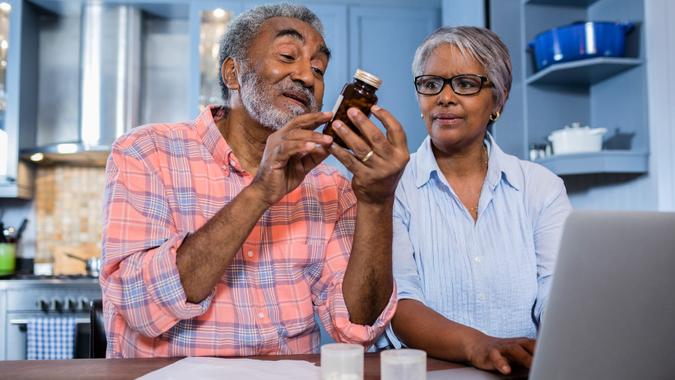 Seniors in the United States haven’t had much to cheer about this year, with inflation running well ahead of the 2022 Social Security cost-of-living adjustment and spiraling health-care costs cutting even deeper into fixed-income budgets. But there might be some good news on the horizon in the form of lower Medicare Part B premiums for 2023.

Social Security Schedule: When August 2022 Benefits Will Be Sent
Discover: 7 Things You Should Never Do When Planning for Retirement

The reason premiums could go down next year has to do with Aduhelm, an Alzheimer’s drug made by Biogen. As previously reported by GOBankingRates, the high price of Aduhelm played a big part in the 14.5% Medicare Part B hike implemented in 2022. But Aduhelm’s price has since come way down amid questions about the drug’s efficacy and safety.

In January 2022, Biogen slashed the wholesale acquisition cost of Aduhelm by 50%. For a patient of average weight, the annual cost of the maintenance dose of 10 mg/kg fell to $28,200 from Biogen’s initial price tag of $56,000.

In April 2022, the Centers for Medicare & Medicaid Services announced that it would limit coverage for Aduhelm only to Medicare patients in authorized clinical trials, Motley Fool reported. Less than a month later, Biogen drastically cut its sales efforts for the drug.

Not too long after that, on May 27, U.S. Department of Health and Human Services (HHS) Secretary Xavier Becerra issued a statement that Medicare Part B premiums paid by Medicare beneficiaries for 2022 should be adjusted downward to account for an overestimate in costs attributable to Aduhelm.

However, due to “legal and operational hurdles” in adjusting Medicare premiums in the middle of 2022, the reduction in premium costs attributable to Aduhelm won’t be incorporated into Medicare premiums until 2023 – which could lower Part B premiums paid by Medicare beneficiaries.

“After receiving CMS’s report reevaluating the 2022 Medicare Part B premiums, we have determined that we can put cost-savings directly back into the pockets of people enrolled in Medicare in 2023,” Becerra said in the statement. “We had hoped to achieve this sooner, but CMS explains that the options to accomplish this would not be feasible. CMS and HHS are committed to lowering health care costs – so we look forward to seeing this Medicare premium adjustment across the finish line to ensure seniors get their cost-savings in 2023.”

It’s still no sure thing that Medicare Part B rates will actually decrease in 2023, however. That won’t be known until the fall when the CMS sets the new rates for Medicare Part B.

As Motley Fool noted, other factors besides Aduhelm will go into calculating the 2023 Part B rates. There is always the chance that premiums will remain the same or even tick slightly higher – especially considering that CMS has hiked Part B premiums in 16 of the past 20 years.

Social Security: New Bill Could Give Seniors an Extra $2,400 a Year
Learn: How Many Hours Can You Work and Still Collect Social Security?

Even so, the Medicare Part B rate for 2023 should be well below what it would have been had the price of Aduhelm not been slashed. This should bode well for Medicare beneficiaries.