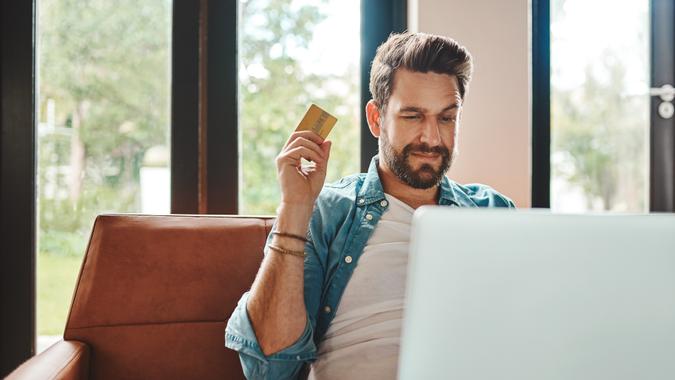 It may not be surprising to some, but impulse shopping online increased during the pandemic, according to a recent study from SoFi.

Find Out: 8 Costco Frozen Foods That Give You the Best Bang for Your Buck
Important: This Credit Score Mistake Could Be Costing Millions of Americans

Couple the extra spending money from stimulus checks with hours of time in front of computers or mobile devices, and you have a perfect formula for impulse buys of everything from electronics to clothing. SoFi analyzed social listening data from 30,000+ Twitter posts between March 2021 and March 2022, and also polled more than 1,000 Americans who said they shop online at least once a week.

The results revealed some habits that may not be the best for people’s long-term financial plans.

For instance, 56% of online purchases were impulse buys, according to the research, with millennials confessing that 63% of their purchases weren’t well planned out. The key drivers behind impulse shopping? Social media and alcohol consumption.

The study showed that 74% of shoppers purchased something because they saw it on social media. This number was up from 40% in 2017, showing the increasing influence that social media — including advertising, organic content from brands and posts from family and friends — has on buying decisions.

Men are even more likely to make purchases based on social media than women, with 78% saying they made a purchase driven by social media and 70% of women saying the same.

Alcohol also played a surprising role in impulse spending, with 60% of men and 40% of women admitting to shopping online “while not totally sober,” according to the report. Although “mommy-wine” culture prevails on social media, it’s actually men who may be more likely to click “add to cart” after a few drinks.

Top purchases while intoxicated included clothing, electronics and gaming, and home goods and décor. Amazon was mentioned 83% of the time the topic “drunk shopping” came up on Twitter and a specific website or store was named. “Prime-nesia,” or the act of forgetting what you’ve purchased on Amazon when the package arrives, is definitely a thing — and may be precipitated by a few nightcaps, it would seem.

Drunk purchases from people we spoke with have included lamps, blenders and adult items sent to former bosses and co-workers.

“Intoxicated shopping can be dangerous because our prefrontal cortex (the thinking part of our brain) is diminished in its capacities when we are under the influence, so it can limit logical, rational decision making and often does not impose limits. Being intoxicated and shopping can lead to serious problems with debt.”

Impulse purchases aren’t always negative, though. Thomas Kusevich, a sushi chef in Kentucky, shared his story. “In December 2019 I was bored out of my mind — no drinking involved — and ordered a $70 leather working tool kit from Amazon at like 2 AM as a Christmas present to myself. It was something I’ve always wanted to try.”

While impulse purchases can sometimes pay off, if you’re looking to curtail spending as the holidays approach, here are some expert tips to help.

Make It Harder To Make a Purchase

Amazon and other websites are set up to make it easy for shoppers to buy without a thought. Instead of setting up the “One-click” option on Amazon and saving your credit card information, don’t store your payment information online.

“Hide any payment cards or log out of apps that you use to online shop,” said Alex Cromer. Alex is a Licensed Professional Counselor with Thriveworks in Richmond. “The extra step of logging in while intoxicated might make it harder to impulse shop.”

Likewise, that act of having to retrieve your credit card and enter the account number plus CCV code could get you to think twice about making the purchase. After all, if you’re not sober enough to enter the digits correctly, you probably shouldn’t be trusted to make a smart buying decision.

Use a Prepaid Debit Card for All Online Buying

If you prefer the convenience of having your payment information stored and typically make wise purchases, you may consider using a prepaid debit card for your online purchases to prevent overspending, experts say.

“Remove all your credit cards from shopping apps,” says Jay Zigmont, PhD, CFP, and founder of Childfree Wealth. “Set a budget for the month and put that amount onto a prepaid debit card. When that card is spent, you have to wait until next month.”

“Often adding something to your cart can give you the same ‘high’ as buying it,” Zigmont says. “Set a rule that you can’t actually complete the sale for 24 hours.”

At that point, you might decide you don’t really need the item. And if you decide to complete the purchase, you may receive an added reward for waiting. “The company may send you a coupon to complete the sale,” Zigmont points out.

Seek Out Other Dopamine Hits

Ultimately, when we make impulse purchases we are seeking the release of dopamine, a feel-good neurotransmitter. That’s why adding a product to your cart may provide that same release of chemicals.

However, if simply adding an item to the cart isn’t doing it for you, you may seek less expensive and potentially healthier ways to release dopamine into your system.

“Impulse spending operates on our brain getting addicted to short-term dopamine hits; the same system that makes you crave sweets and savory foods,” Cromer says. “Impulse spending also can allow someone to have a false sense of control; you get to decide to have an intentionally positive moment during your day.”

Cromer recommends scheduling regular “dopamine hits” throughout your day, such as drinking coffee out of your favorite mug, getting together with a friend, or even completing a 10-minute workout at your desk or during lunch. “Make sure to sprinkle in something fun to every day,” Cromer says.

Greg Wilson, a Chartered Financial Analyst with a degree in psychology, says that the best way to minimize impulse buying is to develop what he calls a “hunter’s mentality.”

“Create a list of what you actually need, and then hunt for the best deals on Amazon. If you know what you need it’s easier to tell yourself to avoid what you want,” Wilson says.

Marketers and salespeople have dozens of tricks up their sleeves to separate you from your hard-earned dollars. Identifying what you truly need, rather than what you want in the heat of the moment in the face of social media ads, can help curb spending.

Cramer confessed to purchasing a hot tub on impulse. “At the end of the day, I have a hot tub,” he said. “It’s great. But I regret purchasing it.”

These tactics can be used online in emails or chats, as well as during in-person sales.

Evaluate Your Lifestyle Before Making a Purchase

Websites may also get you to succumb to purchases by implying that you can adopt a specific lifestyle, or be the person you want to be, if only you buy their products.

Deepak Kumar, financial planner and accounts manager at M.G. Creation, once bought $150 hiking boots on sale and regretted the purchase. “Last year my friend and I were roaming in the market when we saw a sale at a nearby shoe store. On impulse, we decided to go hiking every month, but that was a failed plan. We went hiking only once but cursed ourselves for days due to muscle cramps. Those shoes are now a ‘white elephant’ for us.”

However, Kumar is a financial expert and will not make the same mistake twice. He suggests, “Check whether the thing you are buying is related to your preferred hobbies. For example, people buy books that have catchy titles. But if reading is not your hobby, you will hardly read one of two pages of the book. Calibrating your zone of interest and hobbies before buying anything can save you bucks.”

Essentially, don’t succumb to ads that promise you will become a different or better person after buying their products. Chances are, if a product doesn’t align with your current lifestyle — whether it’s a book or a bicycle — you won’t use it.

Social media can also entice you to believe that your life will be different if only you buy a specific product.

SoFi’s Clayborne offers a tip to avoid that temptation. “For those who are finding social media influencing their spending, I recommend taking a break from social media for a period of time. Switching off or deleting apps temporarily can help curb some of these impulses, whether that’s for a day or two or even a week,” he says.

Is Your Drunk Shopping an Issue?

If you’ve been known to be easily influenced after a glass (or bottle) of wine, it may not be cause for concern. After all, we might crave that dopamine hit whether we are sober or not.

Our experts say that if drunk shopping happens 4 or 5 times each week for more than 3 months, it’s typically an established pattern and should be cause for concern. “This time frame allows your therapist to analyze if something is situational vs. a long-term issue,” says Cromer.

In either case, these tips might help you to think twice before impulse buying online.