Several past GOBankingRates surveys have found that the majority of Americans have very little set aside in a savings account or retirement account.

Americans aren’t doing much better when it comes to retirement savings, either. GOBankingRates’ 2017 Retirement Savings survey found that 34 percent have $0 saved for retirement. 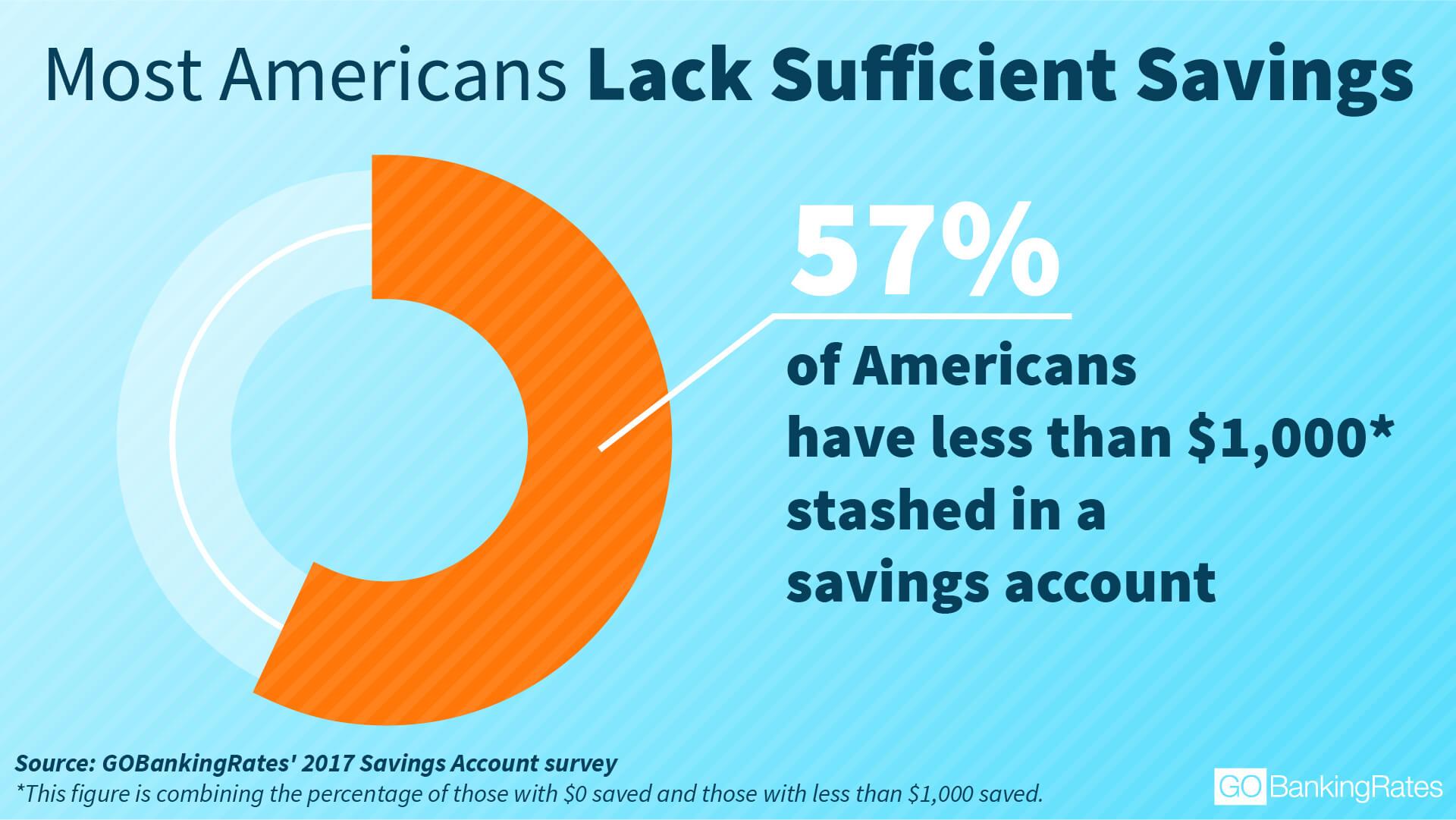 The question, though, is why? Why aren’t Americans saving more money?

To find out, GOBankingRates surveyed more than 5,000 adults across the U.S. We asked, “Of the following, what is the main obstacle that prevents you from saving more money?” Respondents could choose from the following answers:

Keep reading to see why it’s hard to save more money, according to Americans.

High Cost of Living Is the No. 1 Obstacle to Saving in America

The survey found that the most common obstacle to saving is a high cost of living. Nearly 28 percent of respondents say that having to pay for essentials such as rent and food prevents them from saving more money. 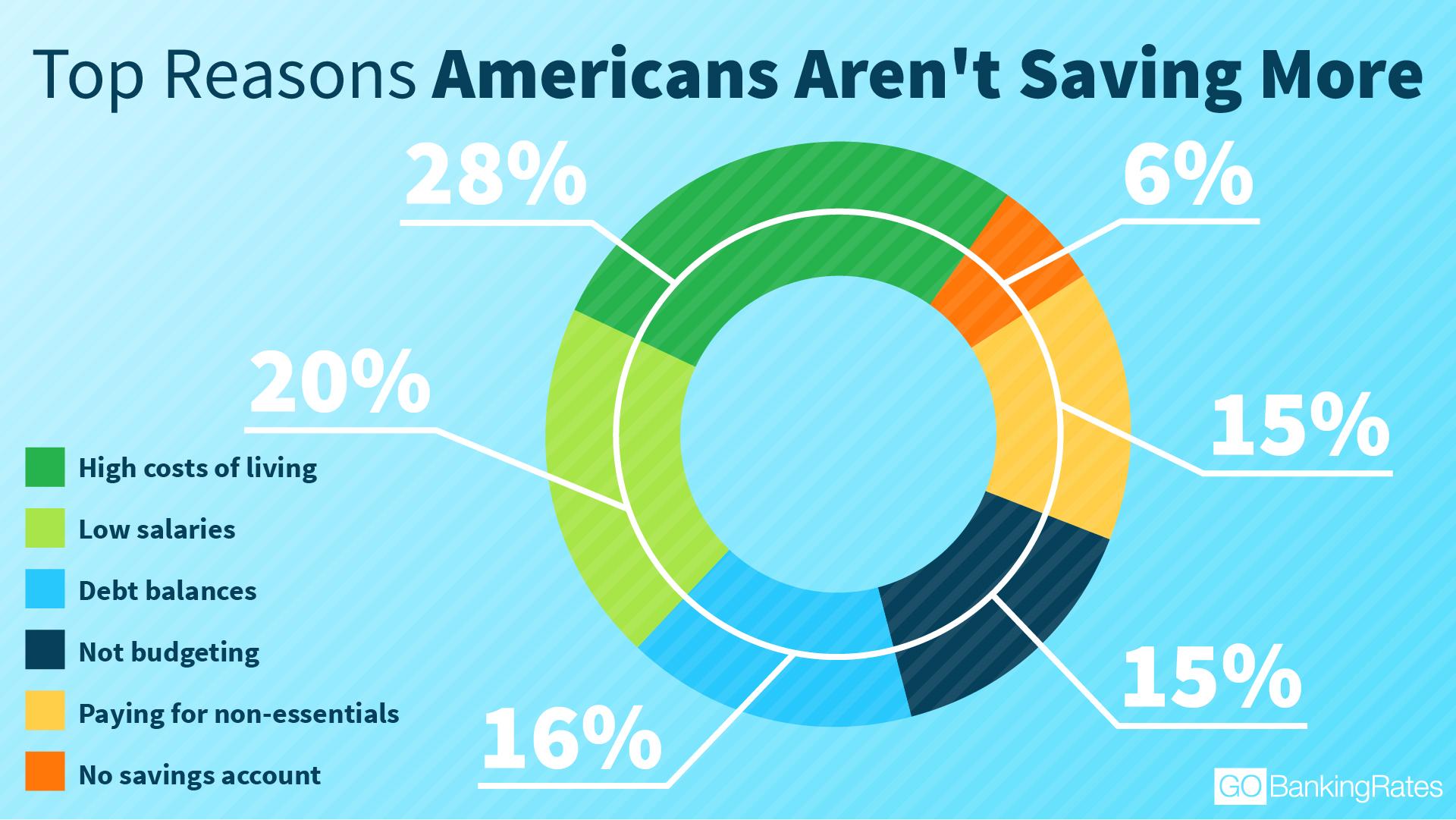 The most common obstacle goes hand in hand with the second most popular response — “low salary,” which about 20 percent of respondents cited. Here are the full survey results:

Cost of Living Is a Bigger Obstacle for Women, Older Adults

A significantly higher percentage of women than men said a high cost of living is the biggest obstacle to saving — 32 percent versus about 25 percent.

Although the biggest hindrance to saving for all age groups is a high cost of living, this is a bigger problem for older adults.

Adults age 65 and older had the highest percentage of any age group — 36 percent — answer that high cost of living is the biggest obstacle to saving more money. Millennials ages 18 to 24, on the other hand, had the smallest percentage of respondents to contend that high living costs get in the way of saving at 22 percent.

Millennials also are more likely than other age groups to say that no budget and no savings account are obstacles to saving.

U.S. Cost of Living Is High — and Continues to Rise

Economic data shows that, indeed, the cost of living has risen dramatically in many parts of the country. But wages haven’t grown as fast, so many Americans truly might be struggling to cover basic living costs — such as food, housing, utilities, clothing and transportation — which means having little to no money left for savings. 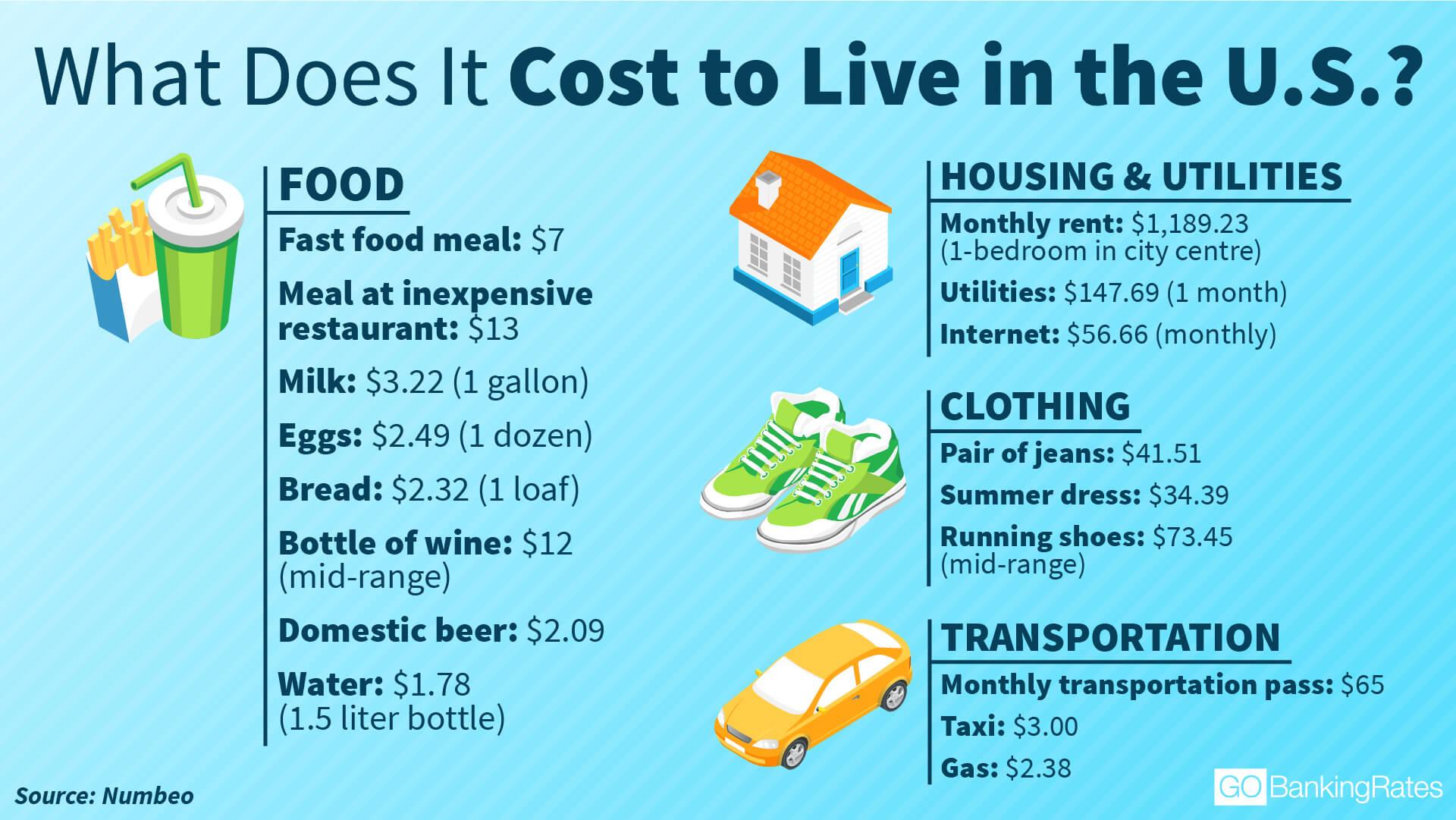 For example, home prices rose 6.2 percent over the past year, according to Standard & Poor’s latest CoreLogic Case-Shiller National Home Price Index. In some places, the price jump was way bigger than average, like as the 12.7 percent increase in Seattle.

Meanwhile, real average hourly earnings have increased just 0.2 percent from November 2016 to November 2017, according to the Bureau of Labor Statistics. Over that same period, consumer prices have risen 2.2 percent. So not only are average wage increases not keeping up with climbing home prices, but also they’re not keeping pace with the rising cost of goods and services.

In many large cities across America, the median household income is not enough for Americans to live comfortably and set aside cash in savings, GOBankingRates’ 2017 Live Comfortably study found. 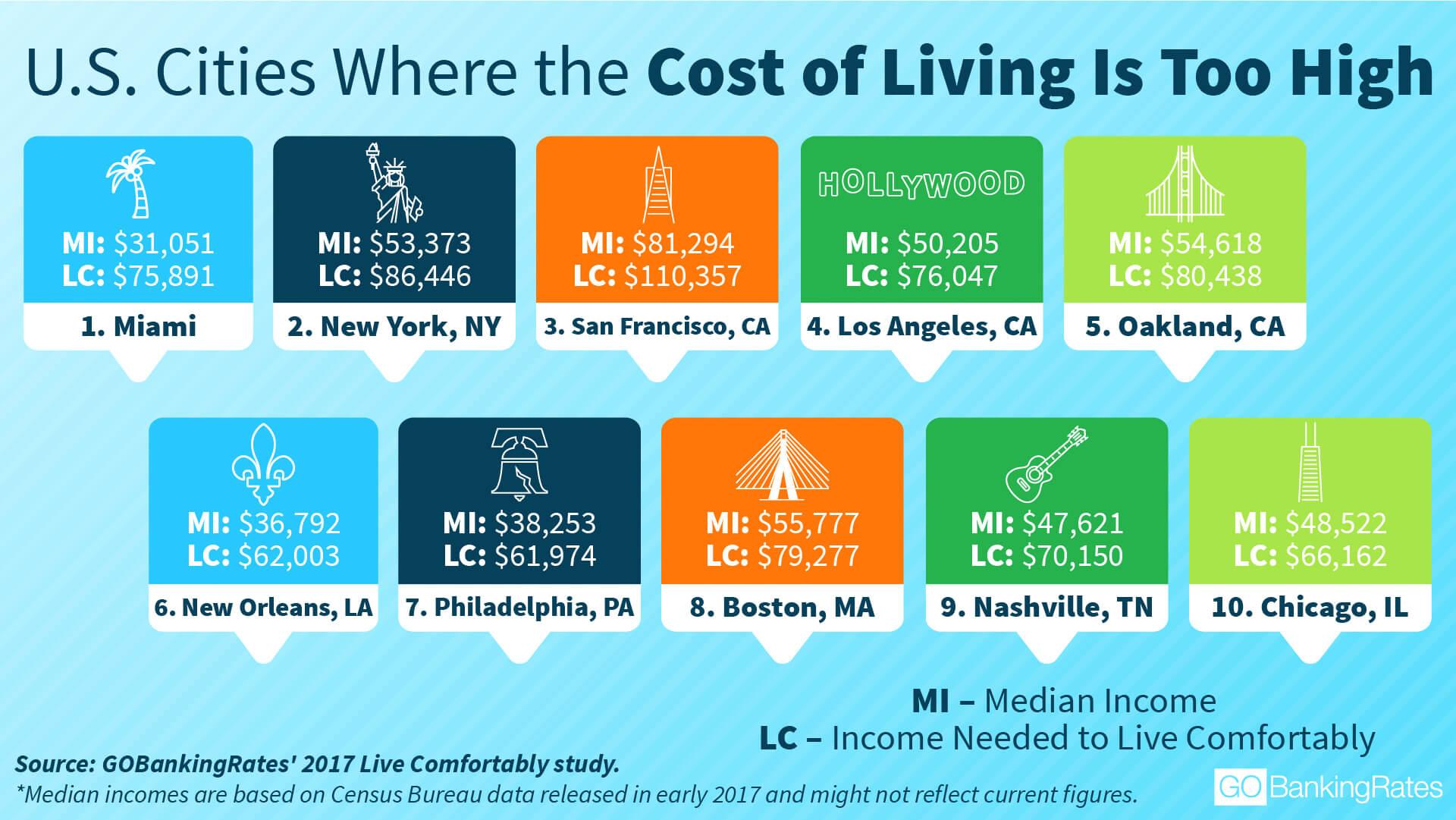 The problem is even worse for low-wage earners. Another GOBankingRates study found that there are only about a dozen cities where you can realistically live on a minimum wage.

The Biggest Obstacles to Saving Money Vary by State

Although the most common obstacle to saving among respondents nationwide is a high cost of living, it’s not the top problem in every state.

Other impediments are more common in 14 states. And in three states, high cost of living tied with other answers as the biggest obstacle. 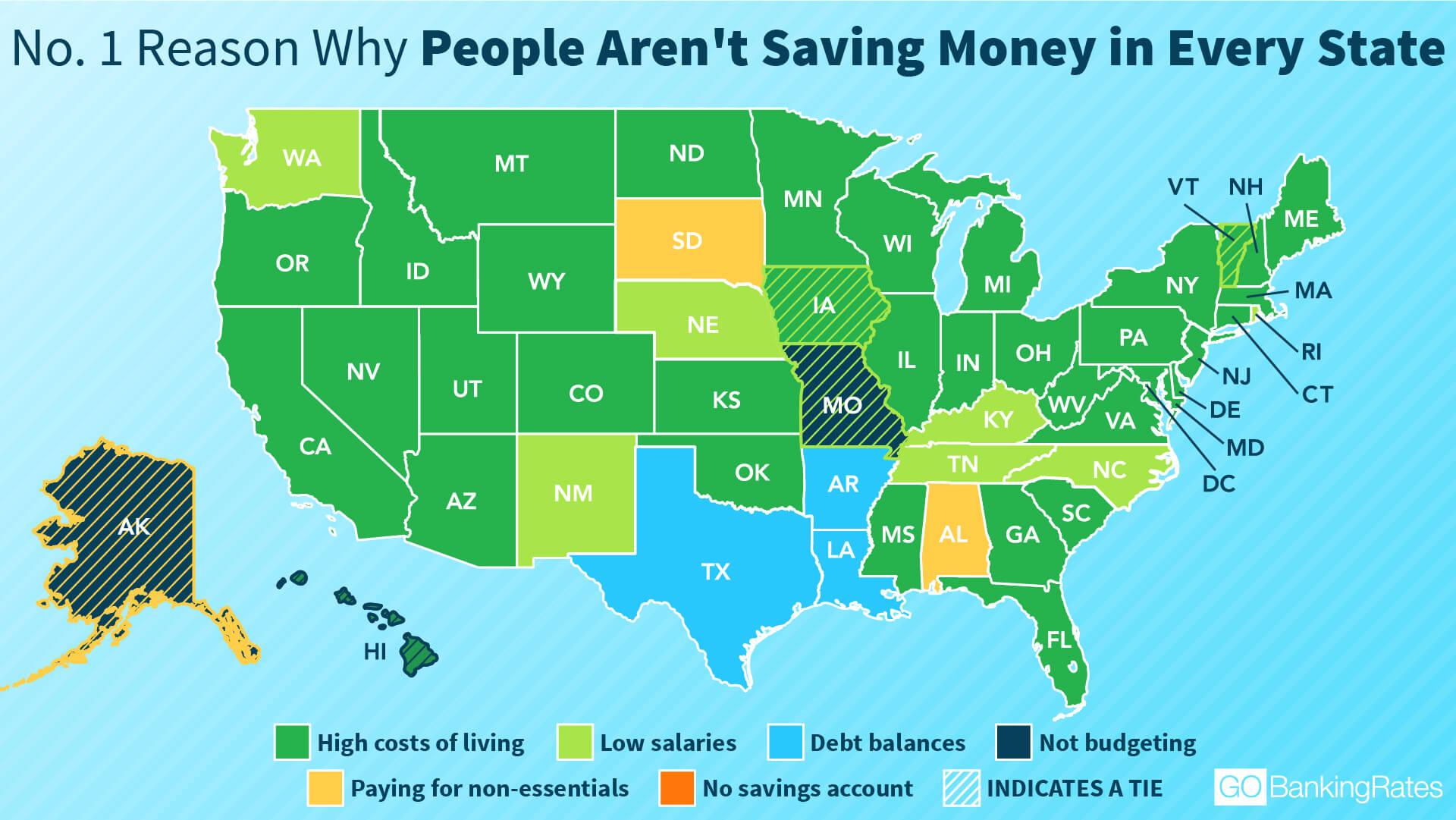 Considering it ranks as the No. 2 obstacle to saving overall, it’s not surprising that “low salary” was named the biggest problem in 10 states.

Of the states where debt was named as the biggest obstacle to saving, Texas is the only one with an average overall debt balance that’s higher than the national average, another GOBankingRates survey found. Arkansas and Louisiana actually rank among the states with the lowest average debt balances.

See the Full Results: Here’s How Much Debt Americans Have in Every State

3 Things Americans Need to Do to Increase Savings

Unfortunately, the No. 1 obstacle to saving money — a high cost of living — is hard to overcome, unless you move somewhere cheaper.

But what if moving is not an option for you? Fortunately, there are other things you can do that might make it easier to save money.

Making more money might make it easier to cover your costs and have enough left over to save. See if your employer offers any training or education-reimbursement programs you can take advantage of to improve your skills and get a raise or promotion.

In addition, look into ways to make more money, such as getting a side gig or second job. Then, put your extra earnings into savings.

Of course, higher wages might help many Americans cope with a high cost of living and possibly have more money to save. But a big income isn’t always what’s needed to be a better saver. For some, a lack of savings could be the result of not budgeting and living beyond their means. In fact, a survey conducted for the National Foundation for Credit Counseling found that 60 percent of adults don’t have a budget and keep close track of their spending.

Using a budget to track your cash flow can help you pinpoint unnecessary expenses you can reduce or eliminate to free up more cash to save. Add up those costs you can cut, and then have that amount automatically transferred to a savings account or retirement account as soon as you get paid — before you have a chance to spend that money.

Although Americans contend that a high cost of living and low wages make it difficult to save, a bigger obstacle might be their mindset. Another GOBankingRates retirement survey found that among people who have no retirement savings, 40 percent said saving for retirement isn’t a priority.

If you don’t have access to a 401k at work, you can save for retirement on your own by opening an IRA, Roth IRA, SEP or solo 401k through an investment firm such as Fidelity or Vanguard.

You might have to live on a little less to save now, but that’s better than having $0 in savings for retirement.

Methodology: This survey was conducted as a Google Consumer Survey and collected responses from 5,036 people. The findings are representative of the U.S. online population with a margin of error of 4.7 percent. The survey posed the question, “Of the following, what is the main obstacle that prevents you from saving more money?” with the option to select: (1) High cost of living (rent, food, utilities), (2) Low salary, (3) Debt, (4) No budget, (5) Non-essential costs (eating out, luxuries), (6) No savings account, (7) None and (8) Other. For the analysis of this survey, respondents who selected “None” and “Other” were excluded. 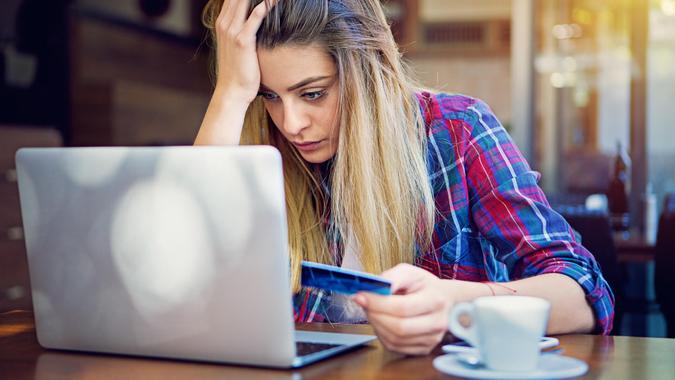 10 Signs You’re Living Beyond Your Means

Find out if you're spending more than you can really afford.