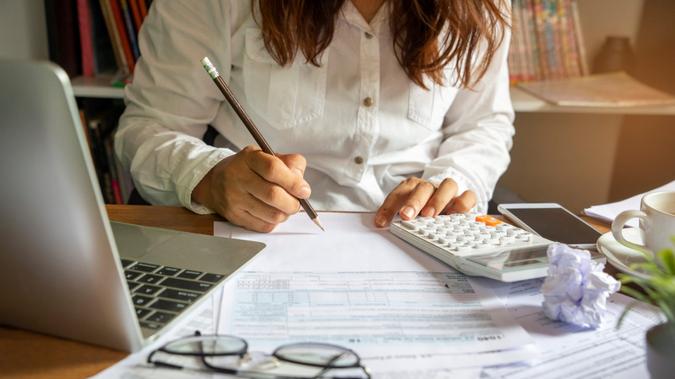 The deadline to file taxes is coming up quickly. The question is: if you’re choosing to file them yourself, are you doing it correctly?

According to a recent GOBankingRates survey of 1,000 Americans across the country, 66.3% of those surveyed say they’ll be relying on tax software like TurboTax to file, and 12.9% said they’ll be filing their taxes without any assistance at all. Though skipping a trip to a tax professional’s office might seem like the more convenient or cheaper way to file your taxes, you can be leaving money on the table, or be making other mistakes that will cost you. GOBankingRates spoke to financial experts who told us some of the worst mistakes taxpayers make when they don’t seek out a professional to file.

Taxes in 2022: Find Out Everything You Need To Know About Filing, Refunds and More
Read: SNAP Benefits Available in Your State in 2022

Not Getting the Most Deductions & Write-Offs

Everyone wants to get the most deductions possible to avoid paying a large sum come tax time, and according to the recent GOBankingRates survey, 72.3% of people filing believe they’re getting the most deductions they can, but without a professional on your side, you won’t know for sure. GOBankingRates Lead Content Data Researcher Andrew Murray said cost is most likely the reason people do their taxes themselves, but what you miss could cost you even more. “You think, ‘Why would I take more money out of my pocket to have someone do the work I could do for free or next to nothing?’ I think the flipside to that coin is that a CPA or tax lawyer might know about more deductions you could take, and ultimately get you more on your tax return.”

When you go to a tax professional, they can personally assess your unique situation and create a plan that captures all the deductions you qualify for. “Many taxpayers don’t take deductions that they are entitled to because they don’t know what these are,” CPA Wendy Barlin said. Barlin added that seeing a tax professional gives you an advocate in the filing process. “The IRS won’t let you know if you have missed a deduction! They only let you know if you have missed declaring income,” Barlin said.

The truth is, tax forms are confusing. The language can sometimes be hard to decipher, and the IRS makes updates to certain forms that makes what you did in previous years obsolete. There are new tax codes that come up every year, and the only people that truly know these inside and out are tax professionals.

Richard Lavina, a CPA and the CEO and Co-Founder of Taxfyle, said those who file themselves run the risk of making a substantial mistake. “Not correctly understanding how to fill out forms could lead to paying more in taxes than one may need to. This can expand into other issues novice filers may find themselves in, including incorrect payment information and choosing the wrong filing status.”

Lavina said that in addition to paying more unnecessarily, you might incorrectly report your earnings and face punishment from the IRS. “Novices may make mistakes in calculating their taxes. A simple math error could lead filers to be vulnerable to IRS penalties.” A licensed CPA is never guessing when helping you file, so you can know for certain that your taxes were filed correctly.

Just a quick reminder: April 18 is tax day this year, because the traditional April 15 deadline falls on a Friday. You might be thinking “Of course I know that.” In fact, according to GOBankingRates’ recent survey, 86.8% plan on filing well before the April 15 deadline, so most people definitely don’t feel like they need reminding. But, life sometimes gets in the way, and if you’re opting to file yourself, taxes might fall by the wayside.

Lavina said tax pros prioritize you filing your taxes because it’s their job, so you don’t have to worry about accidentally forgetting and owing money to the IRS. Plus, Lavina added that CPA’s are simply faster at doing taxes than you, so you don’t have to worry about taking too long to file. “While it may take hours for DIY filers to navigate the maze of forms and laws, a tax professional could do the job at a faster pace.” You end up spending less time doing your taxes and are never worried about making the deadline.