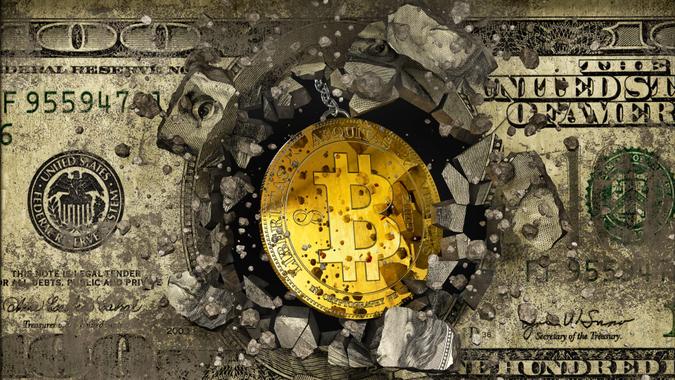 Bitcoin seems to have made a turnaround in March — the crypto soared over the weekend, hitting a milestone by breaking what many analysts say is the $45,000 “key resistance level.” Bitcoin was hovering around $47,000 on March 28, a 6% jump in 24 hours, and up 14% in a week, according to CoinMarketCap.

Bitcoin and Crypto Taxes in 2022: What You Need To Know
Gas Stimulus: Live Blog Updates

“The token broke through a key resistance level last night, having traded around $44,000 for much of the week. It has now hit a three-month high and is now close to reversing all of its losses from 2022. With the price of BTC through $45,000 all eyes will be on what range it settles in this week,” Simon Peters, eToro market analyst said in a note sent to GOBankingRates.

Ether has also been recouping its losses in March, up 6.5% in the past 24 hours, and up 15% in the last week, trading around $3,300, according to CoinMarketCap.

Bloomberg reported that Bitcoin may encounter its next resistance level at $52,000 and should it break through that, it could advance to $65,000 — not far off the all-time high it reached in November, according to Fadi Aboualfa, head of research at Copper.

Hayden Hughes, CEO of crypto social trading platform Alpha Impact, told GOBankingRates that since late January, we’ve seen a slow reversal of the institutional tide that had been ebbing since November.

See: What Is the Next Big Cryptocurrency To Explode in 2022?
Learn: A Complete Guide on How Bitcoin Mining Works

“Major institutions alongside large Bitcoin and crypto investors started accumulating slowly in January and the pace has quickened,” he said. “The price action in January was highly responsive to the perception of decreasing liquidity. We’ve now seen the market price in rate hikes and even armed conflict. Although it was institutions who started this rally, retail has been picking up assets as evidenced by sustained price movements over the weekends.”