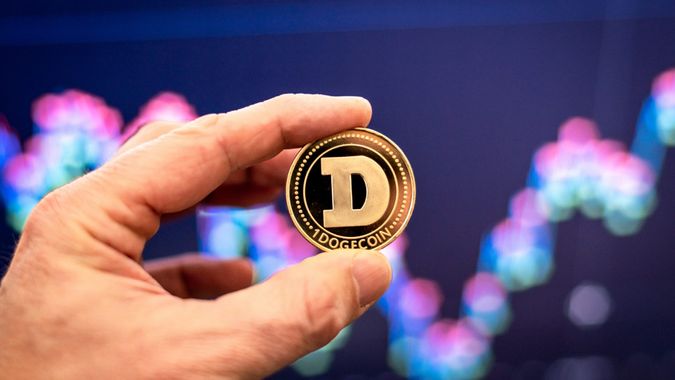 Here we go again. Elon Musk tweeted about Doge last night, sending the crypto soaring less than a week after sending it crashing following his “Saturday Night Live” appearance. The crypto’s surge was also boosted by Coinbase announcing yesterday it would list it in the next few weeks.

See: 10 Best Cryptocurrencies To Invest in for 2021
Find: MoneyGram, Coinme Team Up to Let U.S. Customers Withdraw Crypto in Cash

CNBC said that the price of Dogecoin rose to an intraday high of around 56 cents at 3 a.m., according to data from Coin Metrics. As of 4:30 a.m., dogecoin was up 36% at 52 cents per coin. It’s still down about 20% from a record high of nearly 67 cents only a week ago. As of this morning, it’s at 52 cents, according to CoinMarketCap.

While it has gained incredible traction lately as well as celebrity endorsements, including Mark Cuban and Snoop Dog, just like any other crypto, it’s extremely volatile. If you’re planning on investing in it, you should be ready to stomach wild swings. In addition, it doesn’t have the important supply and demand factor embedded in Bitcoin, the supply of which is capped 21 million. Dogecoin has 129.5 billion tokens in circulation and has no hard cap on the number of coins that can be produced. That said, investors who invested $100 in January, for example, made  a lot of money as Doge shot up 13,000% this year.

In a call with investors yesterday, following its earnings release, Coinbase, the largest crypto exchange, said it would list Doge shortly.

See: How Does Cryptocurrency Work – and Is It Safe?
Find: Chia COO Explains What the New Eco-Friendly Crypto is All About

“There’s more and more assets being created in the crypto economy. I think it’s going to be something, kind of, like apps in the App Store on the iPhone where there’s eventually millions of these assets created over time and so we’re putting a lot of work and thought into how do we accelerate our pace of asset addition, and one of those is DOGE, as you mentioned, which has been getting a lot of attention recently. So, to answer your question directly, we plan to list DOGE in the next six to eight weeks. And then more broadly, we’re going to be focused on how we can accelerate asset addition in the future,” CEO Brian Armstrong said on the call, according to a transcript.

In addition, Doge was helped earlier this week by Musk, a huge Bitcoin follower, who announced on Twitter: “Tesla has suspended vehicle purchases using bitcoin.”

“We are concerned about rapidly increasing use of fossil fuels for bitcoin mining and transactions, especially coal, which has the worst emissions of any fuel. Cryptocurrency is a good idea on many levels and we believe it has a promising future, but this cannot come at great cost to the environment,” he added. The announcement made the price of bitcoin tumble and it’s at $50,000 this morning.