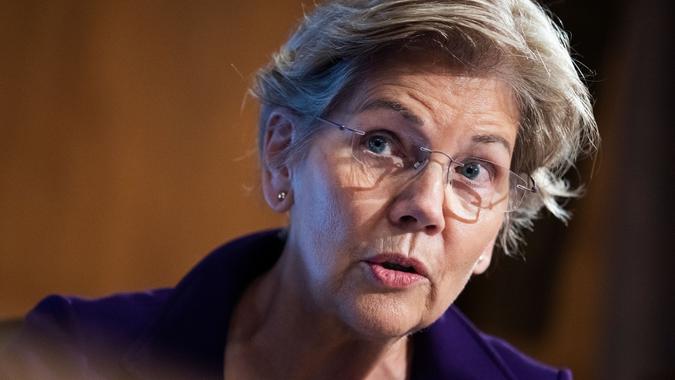 Not everyone’s on board with Fidelity’s plan to allow bitcoin in 401(k) plans, especially with the asset’s recent extreme volatility. Senator Elizabeth Warren and Senator Tina Smith sent a letter to Fidelity’s CEO, asking the company to explain why they have failed to heed the Department of Labor’s (DOL) warning about 401(k) crypto investments and raise concerns about potential conflicts of interest presented by Fidelity being both a bitcoin miner and a purveyor of bitcoin.

Cash App Borrow: How To Borrow Money on Cash App
Read: 9 Bills You Should Never Put on Autopay

“We write to inquire about the appropriateness of your company’s decision to add bitcoin to its 401(k) investment plan menu and the actions you will take to address ‘the significant risks of fraud, theft and loss’ posed by these assets,” the Senators wrote in the May 5 letter.

On April 26, Fidelity Investments launched what it deems the industry’s first offering that will enable investors to have a portion of their retirement savings allocated to bitcoin through the core 401(k) plan investment lineup.

The new offering, which bitcoin-bull firm MicroStrategy plans to add to its 401(k) plan later this year, will be available broadly to employers mid-year.

“Fidelity is thrilled to launch a first-of-its-kind workplace digital assets account that will enable individuals to have a portion of their retirement savings allocated to bitcoin through the core 401(k) plan lineup. This new offering represents the firm’s continued commitment to evolving and broadening its digital assets offerings amidst steadily growing demand for digital assets across investor segments,” Dave Gray, head of workplace retirement offerings and platforms at Fidelity Investments, told GOBankingRates at the time.

The senators added in the letter that, “investing in cryptocurrencies is a risky and speculative gamble, and we are concerned that Fidelity would take these risks with millions of Americans’ retirement savings.”

Amid a market bloodbath following the Fed’s decision last week, cryptos have not been spared. On May 9, Bitcoin was hovering around $32,000, 52% down from its all-time high level of $69,044, reached in November 2021, according to CoinGecko.

Simon Peters, Market Analyst at eToro, wrote in a note on May 9 that the concern now for crypto-asset investors is when the slide will end.

“The market is caught in the wider adversity of investment markets that are battling to decide where comfortable levels are in the wake of interest rate hikes designed to quell soaring inflation around the Western world,” he wrote in the note sent to GOBankingRates. “The market is now moving more closely with other major risk assets such as tech and other stocks. This is indicative of the major shift in the presence of institutions within the crypto-asset market, which now account[s] for a much greater proportion of ownership and tend[s] to bundle their decision-making on crypto with other major assets.”

Peters added that market volatility and underperformance tend to correct in time so what is key now is for investors to ensure they’re happy with their investment cases and are prepared to stay the course for more volatility ahead.

Finally, the Senators added in the letter that bitcoin’s volatility, “is compounded by its susceptibility to the whims of just a handful of influencers. Elon Musk’s tweets alone have led to bitcoin value fluctuations as high as 8%. The high concentration of bitcoin ownership and mining exacerbates these volatility risks.”

See: 22 Side Gigs That Can Make You Richer Than a Full-Time Job
Find: 25 Extra Grocery Costs You’re Probably Forgetting About

In an email sent to CNN, Fidelity said that “as a Massachusetts-based company with a proven 75-plus-year history of doing what’s in the best interest of our customers, we look forward to continuing our respectful dialogue with policymakers to responsibly provide access with all appropriate consumer protections and educational guidance for plan sponsors as they consider offering this innovative product.”