What Are the Best Crypto Bets for People Looking To Make a Quick Buck? 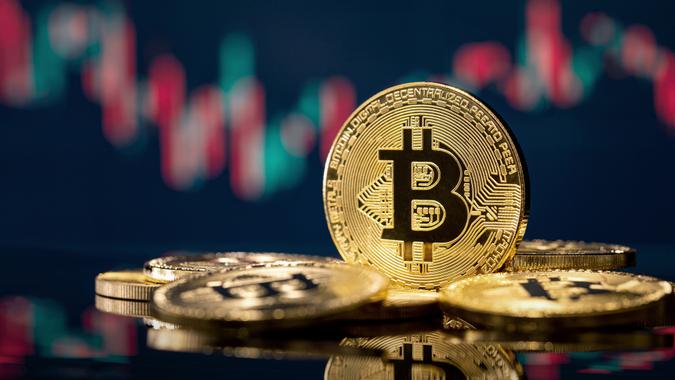 Cryptocurrency has been one of the hottest areas of investing over the past few years. Gains like the incredible 49 million percent that Shiba Inu returned to investors in 2021 alone make big headlines, and for some investors, lots of money as well. But cryptocurrency is inherently risky, and those looking to make a quick buck often get burned. For example, Bitcoin investors who piled into the cryptocurrency as recently as November 2021 are now underwater to the tune of nearly 60%.

Yet, crypto still has a reputation as a place where speculators can make a quick buck. In fact, an early April survey of 1,037 investors conducted by GOBankingRates revealed that 15.29% of crypto investors are in the asset class for that very reason — short-term speculative gains. If you’re looking to make a quick buck in the crypto world — and can afford to risk the money you put up — here are a few bets recommended by experts.

Bitcoin was the first cryptocurrency, and it still leads the asset class in terms of market capitalization by a wide margin. While this doesn’t make Bitcoin “safe” by any stretch of the imagination, as the largest and most well-known crypto, it tends to lead the overall market. In other words, you can still get plenty of speculative thrill in Bitcoin while still limiting the odds that it might trade at zero tomorrow, which is a legitimate risk for some newer coins.

Tim Draper, a venture capitalist who was one of the first well-known Bitcoin investors, remains bullish on the crypto for a number of reasons. Most recently, Draper has suggested that Bitcoin will prove to be an invaluable hedge against inflation, particularly in an era when the U.S. government continues to print money.

But Draper’s long-standing bull case for Bitcoin is based on its inherent traits. According to Draper:

“I am free to move bitcoin around the world and I have the trust of hundreds of thousands of miners watching over the blockchain. There will be a moment there where I can buy my food, my clothing and my shelter in bitcoin, and there will be no need for a fiat currency controlled by governments and banks.”

This drills down right to the long-running existential debate about Bitcoin in general. If you’re a true believer like Draper and think that Bitcoin will ultimately supplant or even coexist with fiat currency, then it’s likely a screaming buy at these levels, especially after the recent dramatic sell-off. Draper himself remains convinced that a $250,000 target for Bitcoin is in the cards.

Options: 6 Alternative Investments To Consider for Diversification in 2022

ShapeShift founder and early Bitcoin supporter Erik Voorhees has an alternate way to play cryptocurrency that still offers the potential for rapid gains. Cryptocurrency exchange Coinbase went public in April 2021, and Voorhees has called it one of the “heads of the hydra.” Specifically, Voorhees told Decrypt’s gm podcast:

“I consider myself a purist, and I’m in this for the principles of decentralization. And yet, I am a big fan of Coinbase,” Voorhees said. “Why is that? It’s because Coinbase is one of the heads of the Hydra. They’re making a heavily centralized product that looks like a traditional fintech app. And they’ve achieved immense success with that.”

The first public cryptocurrency exchange is also endorsed by industry experts like Ark Investment Management’s CEO Cathy Wood, whose funds picked up approximately $2.9 million in Coinbase shares as they took a tumble on May 11, 2022. According to industry-leading financial publication Barron’s, the high price target on Wall Street for Coinbase shares is $380, or a whopping 405% above current levels. This could prove to be a way to make a quick buck in the crypto space without having to worry about selecting a specific winning cryptocurrency.

No less than the co-founder of Ethereum itself has a warning for crypto investors looking to get rich quick: Just don’t do it. In an interview with Time, Vitalik Buterin said that the way many speculators approach the cryptocurrency market, “it becomes a different type of gambling.” Buterin’s original intention as the co-founder of Ethereum was to re-architect the web and enable functionality such as peer-to-peer lending and fairer voting systems. But in the eyes of Buterin, it is also subject to human greed. You may make some money trading the crypto, but in the eyes of Buterin, that aspect of the crypto is pure speculation and not its intended purpose.