Are Cheap Old Houses Really Bargains? Beware of These Hidden Pitfalls and Traps 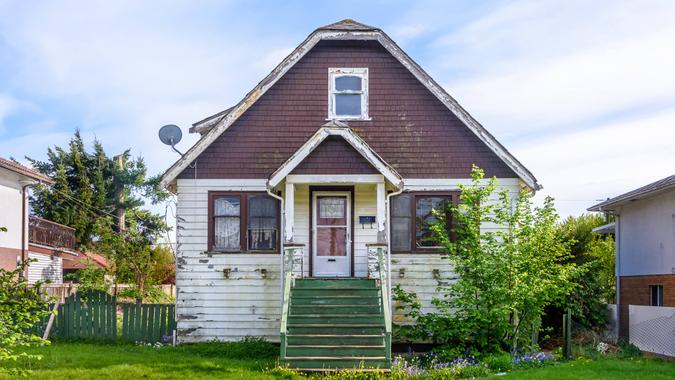 Thanks to HGTV, everyone knows to use words like “character” and phrases like “good bones” when discussing the dream of buying a cheap but grand old house for a bargain, and then they can add a little TLC and make it a home all their own.

“A little TLC” is where the reality check usually comes in.

Although there is no universally agreed-upon age when a house becomes “old,” generally, old homes were built at least 50 years ago. Houses built 100 years ago or more are commonly referred to as “heritage,” “antique,” “century” or “historic” homes, although that last designation usually requires an important person to have lived there or something important to have happened there.

Either way, the charm, character and history of old and antique houses have a way of masking the story behind the tantalizingly low asking price. Yesteryear building materials can be dangerous and hard to remove, and old homes were built under old housing codes that often fall short of the standards of life in the modern era.

Lead and asbestos are among the most common and most dangerous of all the building materials that were standard in the 20th century but are now recognized as potentially deadly hazards. According to Old House Online, nearly nine out of 10 homes built before 1940 contain lead paint, and the substance wasn’t banned until 1978. Lead, a toxin that affects the nervous system, was also once commonly found in plumbing pipes.

Asbestos — a group of fibrous minerals prized for their heat resistance — was used in everything from roof shingles and insulation to vinyl and linoleum floors. Its use in building materials has now mostly been banned because it was linked to cancer.

Left alone, lead and asbestos aren’t harmful, but when building materials fail or are disturbed through renovations, or when lead paint peels or chips, they can become airborne or otherwise easy to ingest. Even in small quantities, lead can cause nerve and brain damage in children or lead to horrible birth defects if ingested by pregnant women. Breathing in even small quantities of particulate matter from airborne asbestos can cause cancer.

Identifying and removing either of these hazards is intrusive, expensive specialty work that you cannot DIY. The average cost of removing lead paint, according to HomeAdvisor, is between $1,557 and $5,309. Asbestos removal costs $1,159 to $2,993.

Old houses come with old plumbing, and a burst pipe can quickly cause widespread water damage that can cost thousands of dollars to repair — tens of thousands, in really bad cases — and even render the home uninhabitable until the damage is fixed.

Even if a pipe doesn’t burst, old homes often require re-plumbing for reasons that are less dramatic or obvious. According to Bonney Plumbing, Heating and Air, houses built in the 1960s and earlier were often fitted with pipes that were galvanized to extend their useful life — an excellent idea at the time that has since proven to be a mistake.

Find Out: Here Are 34 Tips To Make Household Items Last

Over the decades, water flow corrodes the inside of galvanized pipes, causing deposits of iron and other minerals to separate from the zinc. These metal deposits settle, accumulate, block the flow and reduce water pressure. Those same metal deposits can harden water and leave a residue and discoloration. But most importantly, metal deposits — particularly when they contain lead — can lead to a number of long-term health problems.

Sprawling, home-wide plumbing repairs are not cheap. If you’re forced to replumb an old house, you can expect to spend between $1,500 to $15,000, according to HomeAdvisor.

Be Aware: 28 House-Flipping Rules You Should Never Break

About 51,000 home electrical fires kill more than 500 people, injure more than 1,400 and cause more than $1.3 billion in property damage every year, according to the Electrical Safety Foundation International. Electrical distribution systems are the No. 3 leading cause of all home fires.

Unless they were consistently upgraded over the years, old homes come with old wiring and old electrical systems.

According to Wire Chief Electric, old wires degrade and break down over time, as does the insulation they’re wrapped in. They can be chewed by mice, struck by errant nails hammered into walls, or become wet with water damage. Cloth-insulated wiring, common in homes built from the 1950s-1970s, is now considered a fire hazard but is still very common in older homes. Even more primitive and dangerous is knob-and-tube wiring, which is still found in some heritage homes.

Old homes were often wired for lower amperage than today’s power-hungry houses, which can lead to dangerous overloads. Also, older homes often have outdated electrical designs or poorly modified wiring that was installed before today’s strict standards were codified in the modern era.

When touring heritage houses, newbies often chalk up things like swollen floors and buckling wood as part of the aging home’s unique character.

There is a long list of reasons that older homes are more susceptible to damage from termites and other destructive insects, including older building materials and building standards, natural settling and the breakdown or absence of protections designed to keep pests out.

While ecologically important, termites can destroy entire homes and it’s easy for their presence to go unnoticed until it’s too late. Over time, they can compromise the structural integrity of the entire house.

Repairing and replacing carpentry framing damaged by termites can cost thousands, or even tens of thousands of dollars, according to HomeAdvisor.