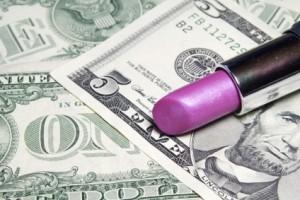 Do you want to get a gauge on the state of the U.S. economy?  You can follow Consumer Confidence, Industrial Production or any number of the myriad of statistics if you’d like. However, you could also kiss off the reams of stats and simply follow lipstick sales: When they’re up, the economy is down.  This (contrary) economic indicator has proven to be red-hot.

The Lipstick Effect is a theory that when economic times are tough, consumers stop spending on big-ticket items, but actually increase their spending on smaller indulgences. The first part of this theory is pretty obvious:  People aren’t apt to purchase new homes, cars and the like when they’re unsure about their financial security.

The second part might not sound so intuitive, but makes sense from a psychological standpoint.  People don’t want to feel deprived, so seek solace in smaller “treats.”

Leonard Lauder, Chairman of Estee Lauder, coined the term after he noticed that during recessions and other economic downturns, his company’s lipsticks sales went up. There is evidence that the Lipstick Effect is applicable to non-U.S. economies, too.

This effect is one of the reasons why the restaurant and some entertainment industries also typically do well during recessions. Consumers figure they “deserve” to go out to dinner more, and perhaps catch more flicks, since they’re making sacrifices on the bigger things.

Stocks that Benefit from the Lipstick Effect

The stocks of companies that sell smaller indulgence products and services should do well during economic downturns.  Of course, this is assuming that companies maintain their prices, so that profits increase along with revenue.  Profit growth–leading to cash flow–is what drives stock prices.

Here’s a select offering of companies that could be considered Lipstick Effect companies:

As would be expected, the U.S. stock market has lost ground since the start of the Great Recession, which the National Bureau of Economic Research (NBER) deemed as January 2008. In fact, as proxied by the S&P 500 index, the market is DOWN 17.6 percent from the start of the recession through August 16, 2011.

Technically, the U.S. economy is now in a slow recovery from the recession.  That said, growth is anemic and the recovery is close to non-existent on both the labor and housing fronts. Semantics aside, it’s safe to say the economy is still on fragile footing. So, the Lipstick Effect should still be in play.

Estee Lauder’s stock performance has been trouncing that of the overall U.S. stock market since the start of the recession. The S&P 500 index is down about 17 percent over the past 3.5+ year period, while Estee Lauder’s stock has gained 127 percent.

Have Lipstick, Will Travel–To Favorite Eatery

The Lipstick Effect would predict that consumers would be making good use of all that new lipstick (and other personal care products), heading out on the town more frequently to chow down and caffeine up at their favorite eatery. The stock market returns on our eateries suggests that indeed has been happening.

The stocks of the eateries have been eating the S&P 500 index for lunch, and dinner, and dessert!  The exact numbers: 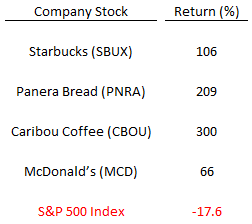 So it appears that the Lipstick Effect is in full force. Do you find yourself purchasing smaller “treats” to make up for saving on big-ticket items?

This article is not meant as a recommendation to buy or sell any securities and the writer does not have any positions in any of the stocks mentioned. 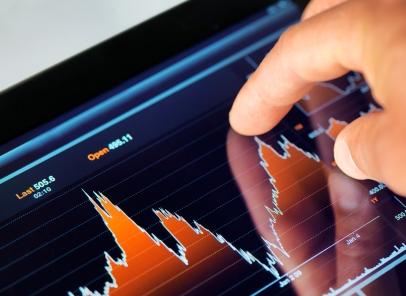 The 10 Top Performing Stocks of the Past 10 Years

> Investing > Stocks > The Stock Market's "Lipstick Effect" Has Been Red-Hot