Although Tesla Shares Are Down, Experts Say They Are Still a ‘Strong Buy’ 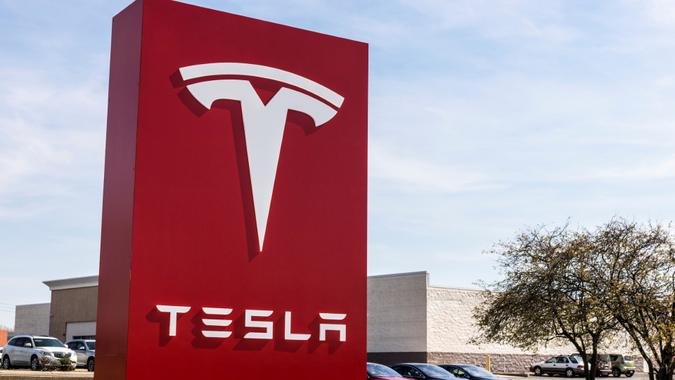 Tesla shares have been fluctuating in value in recent weeks because of several factors, the most notable of them being CEO Elon Musk’s chaotic $44 billion Twitter deal. Some analysts say, however, that the recent stock selloff has overshadowed several key positives in the Tesla story and the opportunities that could come with it, including a “compelling entry point.”

Recently, the stock price has suffered from a broad tech sell-off, growing recessionary fears, COVID-19-related production issues at its Shanghai factory, Musk’s stock sales to fund his planned acquisition of Twitter, and concerns related to revenue and EPS growth from growing competition and rising costs, Garrett Nelson, vice president and senior equity analyst at CFRA Research, wrote in a note sent to GOBankingRates.

In turn, he says that “Tesla has been unfairly punished by the market,” claiming that these factors are overshadowing several key positives, including exceptional operational and earnings execution, future production growth from the recent startup of the Austin and Berlin factories, dramatic balance sheet improvement, and an impressive pipeline of future products.

“We view Tesla as a company with the potential for industry disruption, market share gains, and long-term equity performance similar to companies like Apple and Amazon in the 2010s, and a 38.5% YTD sell-off in the shares has created a compelling entry point,” Nelson wrote. “Caught up in the recent tech sell-off as well as company — and industry-specific issues, Tesla shares have recently ‘gone on sale.’ We think the stock’s sell-off has created a highly attractive entry point in one of the market’s most compelling growth stories — an investment with long-term return potential similar to tech disruptors such as Apple or Amazon several years ago.”

CFRA addresses additional concerns, including the increased competition, which it views as overblown “because we expect most of the new models to sell poorly.” The spike in gasoline prices could also be a positive for Tesla, according to CFRA, citing Kelley Blue Book/Cox Automotive recently estimating that U.S. EV sales surged 76% in Q1 2022, far outpacing the 15.7% decline for total new vehicle sales. EV market share increased to 5.2% of total U.S. new vehicle sales in Q1, up from 2.5% in Q1 2021.

CFRA Research has a Strong Buy opinion and a $1,200 price target on Tesla shares.

On June 21, Musk clarified how many employees at Tesla will be losing their jobs, following comments he made earlier this month about staff reduction.

Speaking at the Qatar Economic Forum on June 21, Musk said his EV company’s workforce would be reduced by 10% over the next three months, but that the overall headcount reduction would only be around 3.5% because hourly staff numbers are still expected to grow, according to Bloomberg.

And on June 10, Tesla finally revealed the long-awaited details of its 3-for-1 stock split in a Securities and Exchange Commission (SEC) filing. The company also said that board member Larry Ellison would be stepping down and not be replaced.

Investors had been awaiting the details since a split was announced in late March. Tesla announced at the time that it would ask shareholders to vote to authorize additional shares (in order to enable a stock split) at this year’s annual meeting. The company said the split will enable more investors to afford to invest in it and broaden its audience and reach, as GOBankingRates previously reported.

Discover: How Much You Would Have Made If You Invested Your Stimulus Checks in Tesla, Apple & Other Top Stocks

Shares of the electric vehicle (EV) company are down 40.7% year-to-date and were down 1.6% in pre-market trading on June 22.