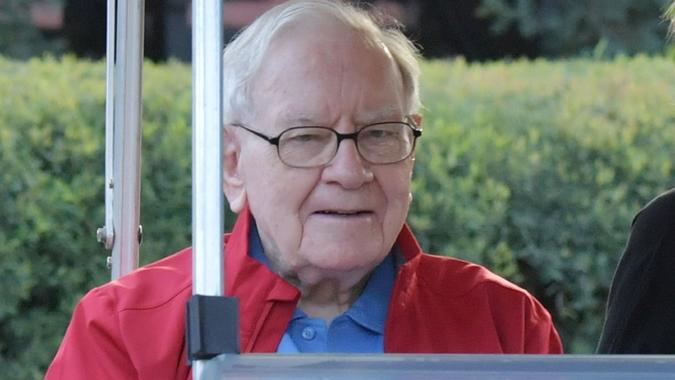 The Oracle of Omaha’s company continued to buy back Berkshire shares, a strategy he had defended in his annual letter to shareholders in February:

“Last year we demonstrated our enthusiasm for Berkshire’s spread of properties by repurchasing the equivalent of 80,998 “A” shares, spending $24.7 billion in the process,” he wrote in the letter. “That action increased your ownership in all of Berkshire’s businesses by 5.2% without requiring you to so much as touch your wallet. Following criteria Charlie and I have long recommended, we made those purchases because we believed they would both enhance the intrinsic value per share for continuing shareholders and would leave Berkshire with more than ample funds for any opportunities or problems it might encounter. In no way do we think that Berkshire shares should be repurchased at simply any price. I emphasize that point because American CEOs have an embarrassing record of devoting more company funds to repurchases when prices have risen than when they have tanked.”

Berkshire paid $12.6 billion in the first six months of 2021 to repurchase shares of its Class A and B common stock, according to the filing.

“The buyback was in line with previously set expectations given Berkshire’s recent activity and the fact that they have not been able to deploy their $100 billion-plus cash hoard into an acquisition,” Cathy Seifert, VP and equity analyst at CFRA Research, tells GOBankingRates.

In addition, in a research note she sent to GOBankingRates, Seifert wrote that the share repurchase program, amended in 2018, “gives Messrs. Buffett and Munger significant discretion in allocating capital, although we note Berkshire remains committed to maintaining a cash position of $20 billion.”

The sentiment was echoed by Eric Schiffer, CEO of The Patriarch Organization, who tells GOBankingRates that “Buffett is being rational with his Berkshire buyback after what has been a nice run to the stock and will increase capital deployment when the valuation is more opportune.”

Berkshire also addressed the pandemic in the filing, saying it had adversely affected nearly all of its operations during 2020, and in particular, during the second quarter, although the effects varied significantly.

“The extent of the effects over longer terms cannot be reasonably estimated at this time. Risks and uncertainties resulting from the pandemic that may affect our future earnings, cash flows and financial condition, including the ability to vaccinate a significant number of people in the U.S. and throughout the world as well as the long-term effect from the pandemic on the demand for certain of our products and services,” according to the filing.