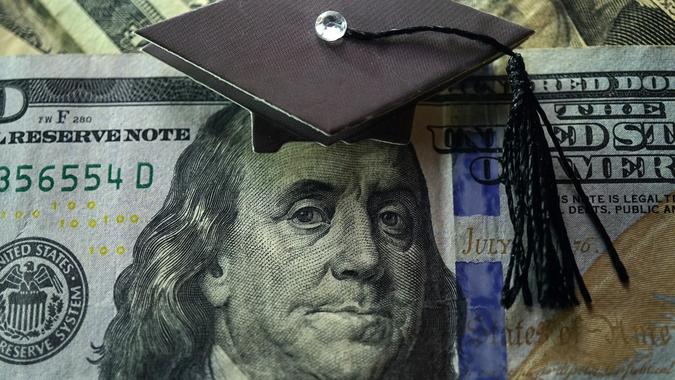 In the first quarter of 2022, student loan debt reached an all-time high of $1.59 trillion, according to the Federal Reserve Bank of New York and as reported by CNBC. Student loan debt accounts for 10% of total household debt, making it the second-largest category of consumer debt behind mortgages.

Discover: Surprising Things You Can Buy With Food Stamps
More: Unplug These Appliances That Hike Up Your Electricity Bill

Throughout the pandemic, private student loans continued to build interest and required borrowers to make monthly payments. CNBC noted that this may partially explain the increase in total debt, in addition to new loans for current and new students.

Federal student loan payment forbearance has been extended until Aug. 31, and CNBC reports rumors that the Biden administration is considering $10,000 in federal student debt forgiveness per borrower. Democrats are pushing to increase that number to $50,000 for each borrower making under $125,000 per year, says CNN.

Although the Biden administration has already canceled more than $17 billion of the $1.6 trillion in outstanding federal student debt, these actions fall short of the campaign promise to more broadly cancel student debt.

According to a January CNBC + Acorns survey, 81% of people with student loans say that student loan payments have forced them to delay key life milestones. Federal data also shows that total student debt has increased by nearly 10% since the third quarter of 2018, CNBC added.