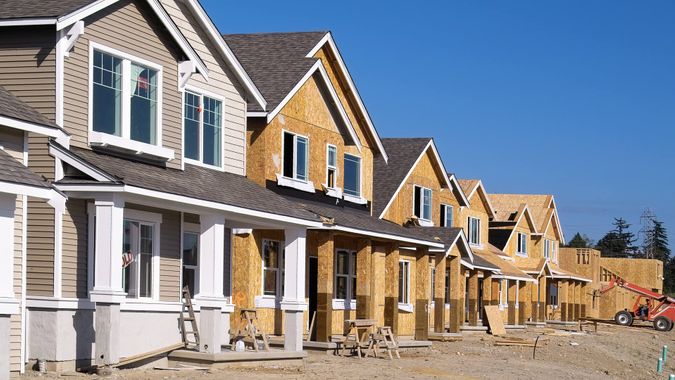 If you’re on the hunt for a new home and need an idea of how hot the U.S. housing market is right now, consider this: Home builders in some areas of the country are so overwhelmed they actually have to turn down jobs — and, in some cases, are putting homes up for auction instead of selling them at the usual fixed price.

2021 Small Business Spotlight: Don’t Miss Out on Nominating Your Favorite Small Business to Be Featured on GOBankingRates — Ends May 31
Find: How Much Does It Cost to Build a New House?

As Bloomberg reported on Thursday, the limited supply of available homes, combined with rising construction costs, has caused builders to suppress orders and, in some cases, stop signing new contracts at all. In some areas of the country — namely Florida, Texas and southern California — large, publicly traded builders like Lennar and D.R. Horton have been experimenting with blind auctions on new homes.

Demand for new homes has been driven by a number of factors, including a rise in Americans working from home during the COVID-19 pandemic. Meanwhile, the construction industry itself has been plagued by skyrocketing lumber costs and a shortage of available workers. Builders are facing delays for everything from Sheetrock and cabinets to kitchen appliances. The result is that homes are taking about a month longer than usual to build.

This all adds up to a housing market that doesn’t have nearly enough homes to meet demand. As recently as last month the market was short by 3.8 million homes, Business Insider reported, citing data from mortgage lender Freddie Mac. This shortage has contributed to rapidly ballooning home prices, which have been rising at their fastest pace in 15 years, according to a March report by The Wall Street Journal.

See: How to Put In a Successful Real Estate Bid in a Hot Housing Market
Find: What Do the New Home Sales Reports Mean and What Is Measured?

Nearly one-fifth of builders are delaying sales or construction, according to an April survey by the National Association of Homebuilders, as reported by Business Insider, while 47% have added escalation clauses into contracts that let them raise prices as costs increase. One industry source cited by Bloomberg said that more than 60% of respondents to a nationwide industry survey are limiting the number of contracts per project that they sign each month.