Disney, one of the biggest media companies in the world, has been bringing the magic of animation to families since the 1920s both on and beyond the movie screen. Magic Kingdom, the main theme park at Disney World and one of the most popular U.S. tourist attractions, draws in more than 20 million visitors each year.

The Walt Disney Company announced on April 11 that its new streaming service, Disney+, is scheduled for release on Nov. 12 this year. The announcement prompted Disney stock to soar over 10% on April 12. Encouraging news, but here are some other figures to help investors decide if they should back the happiest stock on Earth.

On Feb. 5, 2019, Disney reported earnings per share of $1.84, which beat Wall Street estimates, and revenue of $15.3 billion during its first quarter 2019 earnings report. Disney stock rose 2 percent during after-hours trading.

Market capitalization is determined by the total dollar value of a company’s outstanding shares, which helps investors determine the relative size of a company. Disney’s range, with a difference of about $34 billion between the lowest and highest values, reflects relative market stability, but its uptick in revenue in 2018 likely means positive gains for investors.

Learn About: Disney’s Bob Iger and Others Who Went From Entry Level to CEO

Based on Disney’s revenue and profits from the last three years, Disney’s net worth is nearly $130 billion.

Disney stock has seen been both stasis and turbulence since 2015. Share prices have consistently remained between $90 to $120, but with sudden downturns, including a lower share concentration in 2016. One of its more noticeable drops in share value occurred in May 2018 after a disappointing showing for “Solo: A Star Wars Story” translated into share devaluation. However, Disney’s 2018 income statement revealed a reason to smile: Noticeable gains in both profit and revenue, perhaps breaking its witch’s spell of market stagnancy.

Netflix and Comcast Challenge the Mouse

Dark clouds formed over the magic kingdom in the form of Netflix. In May 2018, the streaming giant surpassed Disney in market value.

Still, that bump in share value following the Disney+ news might give Netflix investors pause, especially as Disney’s streaming service will cost less than the streaming giant’s most popular plans. Still, Netflix shares are still seen as much more valuable by the market’s assessment, and they’ve been doing well at exceeding subscriber growth goals.

The studio’s first feature-length animated film, “Snow White and the Seven Dwarfs,” premiered in 1937, and was followed by dozens of Disney movies in the decades since. In 1940, Walt Disney Productions introduced its first stock.

As of 2017, the Walt Disney Company employs 195,000 employees who operate in 45 countries. It was also named one of LinkedIn’s top companies of 2017. Mary Barra, the first woman CEO of GM Motors and one of the few women to ever head a Fortune 500 company, sits on Disney’s board of directors. If the deal with 21st Century Fox goes through, media mogul Rupert Murdoch and his family will become Disney’s second-biggest shareholders behind the large mutual fund Vanguard. 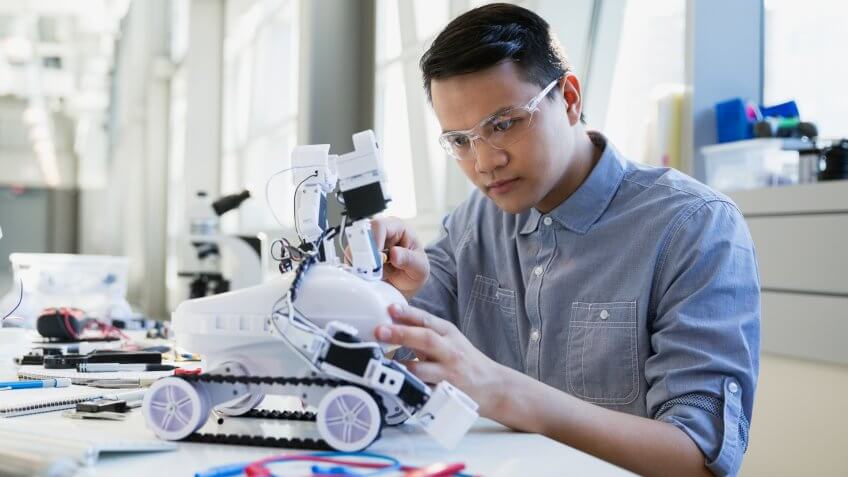 How Much Does it Cost to Invent Something?

See how much your next big idea will cost you.

GOBankingRates > Money > Business > How Much Is Disney Worth?