How Much Is Bet on the Kentucky Derby Each Year? 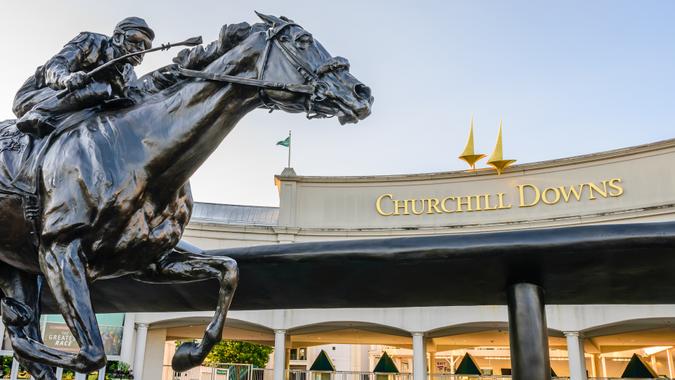 When you watch the 148th Kentucky Derby on Saturday, you’ll see the pageantry involved with the race that many call the Greatest Two Minutes in Sports. You’ll see the fashion parade, with women strolling the grounds of Churchill Downs in Louisville, Kentucky, in their flowered print dresses topped with ornate hats, the men in seersucker blazers.

Learn: How To Get Rich With a Normal Job
Discover: 10 Reasons You Should Claim Social Security Early

Some of the 150,000 or so revelers will sip mint juleps — the official drinks of the Kentucky Derby — while they wait for horses with names like Epicenter, Tiz The Bomb and Smile Happy to take the 1¼-mile track as the crowd sings “My Old Kentucky Home.”

But outside the eye of the television cameras, another public tradition endures: betting on the Derby. Casual fans who want a slice of the action can plop down $2 at the betting window, while more experienced gamblers who’ve studied the horses and the odds often make what are known as exotic wagers — tougher to win but with a greater payout. Even if you don’t make the trip to Churchill Downs, you can play along in many states, thanks to legalized online sports betting.

So, just how much money is bet on the Kentucky Derby each year? Read on to find out.

In 2021, more than $12.2 billion was bet on Thoroughbred horse racing in the United States, according to Equibase, which tracks the racing industry. It represented a gain of nearly 12% over 2020, which saw disruptions to the race schedule because of COVID-19. But the figure still exceeds 2019, when just over $11 billion in bets were placed.

In 2021, betting on the Kentucky Derby from all sources reached $233 million, up 85% from the 2020 race, which was held without spectators due to the pandemic, industry publication BloodHorse reported. Only the record $250.9 million in 2019 topped the 2021 figure.

As with the sports betting industry in general, betting on the Kentucky Derby has multiplied rapidly throughout the years. In 1981, the total bet on the race hit the $11.4 million mark. In 1991, it had grown to $42.7 million and, 10 years later, the number had increased to $107.6 million.

In 2011, bettors wagered $165.2 million on the race. All figures are according to the Kentucky Derby.

Betting on the Derby

The early favorites for Saturday’s race are Zandon, at 3/1 odds, and Epicenter, at 7/2. Wagering on those horses might seem like a safe bet, but they won’t bring you a huge payoff. Instead, look to a longshot, of which there are plenty in the 20-horse field. In fact, eight horses were listed at 30/1 odds.

If you know how to place exotic bets — such as the trifecta, exacta and superfecta, where you wager on multiple horses in the same race – it can pay off big if you predict correctly.

In 2019, a bettor in Las Vegas took home about $102,000, before taxes, after spending $8 on superfecta bets, the New York Post reported. His cause was helped by Country House, a 65/1 longshot who won the Derby after apparent winner Maximum Security was disqualified.

That didn’t come close to comparing, however, to the feat pulled off by a Texas woman the previous year. ABC News reported that the woman bet $18 on a Pick 5 wager and correctly picked the winner of the Derby, Justify, and the winners of the four races on the race card leading up the Derby. With her five correct bets, she garnered an eye-popping $1.2 million.