What Is the Trillion-Dollar Coin and Can it Solve the Debt Ceiling Debate? 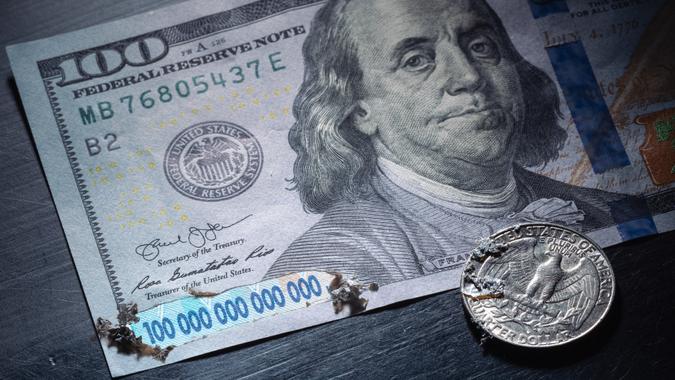 The U.S. House of Representatives passed a bill Wednesday to suspend the debt ceiling, but it’s unlikely to pass through the Senate, according to the website SeekingAlpha.com. It would be the 79th time since 1960 that Congress raised or suspended the debt ceiling, most recently in 2019. However, some in Washington have another idea – a loophole, if you will – that would avoid raising the debt ceiling and prevent the U.S. from defaulting on its loans.

The U.S. Treasury would mint a $1 trillion platinum coin under commemorative clauses and deposit it at the Federal Reserve. Essentially, this would give the U.S. an extra $1 trillion in funds to cover existing debts and pay bills without raising or suspending the debt ceiling.

The plan was originally bandied about in 2011, according to an article in The Atlantic. The idea was presented by a commenter on the blog Pragmatic Capitalism, as a solution to raising or suspending the debt ceiling 10 years ago. It has gained renewed attention this month and is being discussed on Twitter in conversations using the hashtag #MintTheCoin.

The Bipartisan Policy Center outlined the traffic consequences of the U.S. exceeding the debt ceiling. It could mean a 40% austerity budget for the government – at best – or default on our debt. A trillion dollar coin, some experts say, sounds like a sane solution by comparison.

But What About Inflation?

Most people know that when Congress prints (or mints) fiat money, it can cause inflation. The more dollars and coins we have, the less value they hold. However, the trillion dollar coin would not cause runaway inflation, as many might fear, according to an article in The Atlantic. The coin isn’t paying for new spending and, as such, won’t be spent all at once in a lump sum. It’s there just to pay for spending already authorized by Congress. The U.S. is using the trillion-dollar currency simply to keep up on the debt obligations, not to pay it down. “The total amount of spending in the economy would stay the same,” the Atlantic writes.

If inflation started increasing beyond the targets set by the Fed, the government would start selling bonds to offset the new money.

Will we see a trillion-dollar coin minted to prevent the debt limit crisis? It probably wouldn’t be the craziest thing that’s happened in recent years, and it could be far less destructive to our government and the economy than hitting the debt ceiling or defaulting on loans, some experts say.