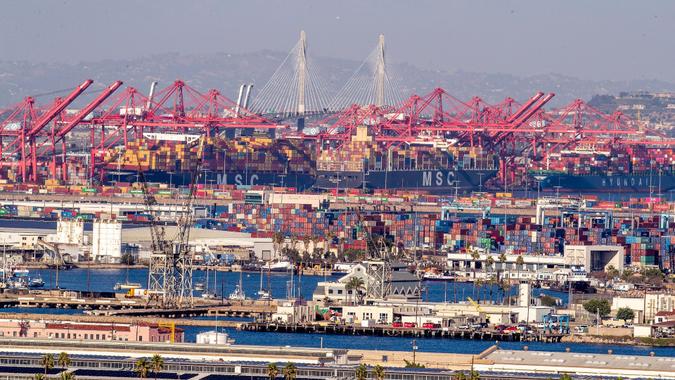 The supply chain bottlenecks are getting increasingly complicated, as global ports are growing more gridlocked, triggering a slew of issues including higher prices for consumers and a slow economic recovery.

Discover: How To Beat Inflation at Costco and Other Grocery Stores
Explore: Kraft Heinz to Consumers on Inflation-Related Price Hikes: ‘Get Used to It’

As of Friday, at least 107 container ships were waiting off Hong Kong and Shenzhen, and globally, RBC Capital Markets estimated that 77% of ports were experiencing abnormally long times to turnaround traffic, Bloomberg reported. Now, the same issues have arrived in the US.

Even if shipping strains ease in China, that “could still mean new surges of vessels arriving at congested ports like Los Angeles-Long Beach, shifting the backlog to the destination ports,” Judah Levine, head of research at Hong Kong-based Freightos.com, an online shipping marketplace, told Bloomberg.

The White House said last week that the pandemic has led to a surge in e-commerce, with sales increasing 39% in the first quarter of 2021 compared to the first quarter of 2020. At the same time, COVID has disrupted workers in key transportation and logistics nodes — the jobs of 1,800 Southern California port workers were disrupted because of COVID earlier this year, according to a fact sheet.

To address these issues, the White House announced a series of public and private commitments to move more goods faster, and strengthen the resiliency of our supply chains, by moving toward 24/7 operations at the Ports of Los Angeles and Long Beach.

“These two ports are the point of entry for 40% of containers to the U.S., and are on track to reach new highs in container traffic this year. Through August, Los Angeles has moved 30% more and Long Beach over 20% more containers to help U.S. exporters reach customers around the world and U.S families and factories get the goods they need,” according to the fact sheet. In addition, the White House said that the International Longshore and Warehouse Union (ILWU) announced its members are willing to work those extra shifts, to clear “existing backlogs.”

Finally, large companies announced they will use expanded hours to move more cargo off the docks, so ships can come to shore faster. “Unlike leading ports around the world, U.S. ports have failed to realize the full possibility offered by operation on nights and weekends. Moving goods during off-peak hours can help move goods out of ports faster. For example, at the Port of LA, goods move 25% faster at night than during the day,” according to the factsheet.

In remarks to address supply chain bottlenecks last week, President Joe Biden said that in addition to the measures the White House had announced, Walmart, “is committing to go all in on moving this product — its products 24/7 from the ports to their stores nationwide. Specifically, Walmart is committing as much as a 50 percent increase in the use of off-peak hours over the next several weeks,” according to a transcript of his remarks.

Additionally, FedEx and UPS, committed to significantly increase the amount of goods they are moving at night. “Their commitment to go all in on 24/7 operations means that businesses of all sizes will get their goods on shelves faster and more reliably,” Biden said.

“And other companies are stepping as well. They include Target, Home Depot, and Samsung that have all committed to ramp up their activities to utilize off-peak hours at the ports,” he added.

Last week, the International Monetary Fund slashed its 2021 growth forecast for the U.S. by 0.1% percentage point compared to its July outlook, to 6%, citing rising inflation and supply disruptions, which pose “another policy challenge.”