7 ‘Seinfeld’ Plotlines You Should Apply to Your Finances 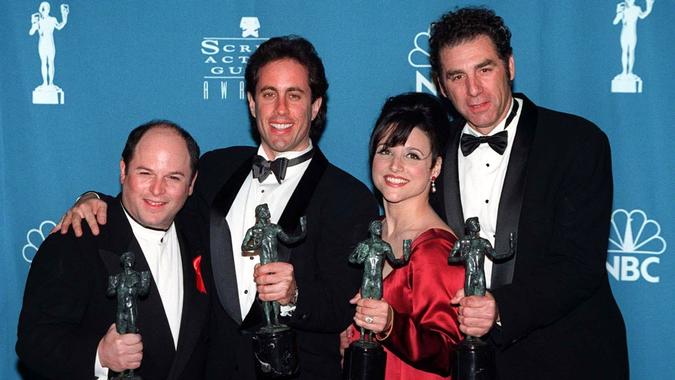 Widely regarded as one of the best sitcoms of all time, “Seinfeld” isn’t just a barrel of laughs — it’s also incredibly smart. The show is brimming with insights into human nature, with a laser sharp focus on idiosyncrasies that may seem small, but speak volumes about one’s character. And, if you look closely enough, you can find many financial pearls of wisdom.

See: The Top Ways Your Favorite Television Shows Make Money
More: The Simpsons, Friends and the Most Profitable TV Shows of All Time

Even financial professionals find “Seinfeld” to contain important truths about money matters. Here are 7 “Seinfeld” plotlines you should apply to your finances.

In this episode, Kramer and Frank Costanza embark on a new business venture: creating and marketing a bra for men. Kramer wants to call it “The Bro” but Frank insists on “The Manssiere.” Not seeing eye to eye on this business decision thwarts their progress.

“When you don’t see eye to eye on your finances, it can have severe repercussions on your relationship and keep it from progressing,” said budgeting expert Andrea Woroch. “It’s important to talk about your money goals and spending/saving values, and figure out how to get on the same financial page with your partner. Host monthly money dates and learn to make compromises. You can even have your own fun money each month based on a set budget in which you spend it as you please without judgment.”

Find Out: How Much Is Jerry Seinfeld Worth?

In this episode, Kramer takes over Moviefone and relishes in the bizarre gig that is far from official. It’s a side hustle he can do entirely from home, which is something so many Americans are managing.

“There are lots of side hustles that you can do from home in your spare time to rake in extra cash and reach various financial goals faster,” said Woroch. “For instance, you could take customer service calls or [practice] virtual tutoring via VarsityTutors.com. Or, make up to $1,000 a month by pet sitting through sites like Rover.com, which is great for anyone working remotely — especially if you have a yard.”

Related: 22 Side Gigs That Can Make You Richer Than a Full-Time Job

George, unsurprisingly, commits a cringey faux-pas in this episode: he double dips food at a wake. This is a big no-no, even in the realm of personal finance!

“Don’t double dip in your financial accounts,” Woroch said. “Set up separate accounts for each goal as this makes it easier to track your progress and stay motivated to keep putting money away the closer you get to succeeding. For instance, you should have a separate emergency fund, retirement account and college savings for your kids. You can even open a vacation fund or car maintenance fund, but don’t double dip or you’ll never reach your goals.”

Advice: 12 Essential Money Tips for Every Phase of Your Financial Life

“In this infamous episode, George, after moving back home with his parents, bumps into a talent scout outside a restaurant who notices his ‘exquisite hands’,” said Julian Schubach, VP, wealth management at ODI Financial. After the life-changing compliment, George goes all out to protect his newly found assets, covering his hands in oven mitts everywhere he goes. George begins earning money modeling his hands for photo shoots, but that quickly ends when Elaine pushes George into a hot iron in Jerry’s dressing room before his talk show appearance.

“George found himself in a position where an unexpected income source was quickly dissolved,” Schubach said.  “He thought the money he just started earning would last forever and would be life-changing. George never planned for the fact that perhaps becoming a successful hand model would be a short-lived escapade.”

As Schubach sees it, this plotline presents a lesson that all investors can learn from.

“First, if something seems too good to be true, it usually is,” Schubach said. “There are no get-rich-quick solutions in investing. It is important to take a slow and steady approach to managing your wealth. Additionally, if a new income earning opportunity arises, take steps to save as much as you can while that new income is flowing. Working with artists with fluctuating income, I always encourage them to save as much as possible when they have high income earning periods, because one never knows what the future will hold.”

“George, we’ve had it with you. Understand? We love you like a son, but even parents have limits!”

“Frank Costanza says this in [this] episode,” said Ryan McCarty, CFP. “Too often we see retirees put their retirement on hold or damage it in irreparable ways to make sure their kids are happy or just OK (lost a job so they replace their income). The worst part is this can happen at young or old ages. In youth, you put college savings ahead of your retirement even though you can only afford to do one or the other. This is a chronic mistake parents make out of the emotional need to give their kids the best future possible.”

See: Jaw-Dropping Stats About the State of Retirement in America

“In this episode, Elaine begs Mr. and Mrs. Seinfeld to turn on the air conditioner,” said Erin Shine, founder of Attainable Home. “It’s great to save money and be frugal in life on things you don’t want to spend money on, but there is a point where your own happiness and comfort (and comfort of those around you) will suffer.”

Shine added, “Spend money on what you care about and what is needed, and not on what doesn’t matter. My parents do this too — to save money. Then you wake up at 4 a.m. to a freezing cold house in the winter because they won’t turn the heat on! (Or A/C in the summer).”

Helpful: Unplug These Appliances That Hike Up Your Electricity Bill

“When Kramer watches a movie that involves a woman in a coma, he becomes concerned about what would happen to him in a similar situation,” said Charles H Thomas III, CFP, a financial advisor and the founder of Intrepid Eagle Finance. “While the series of events is hilarious, planning for our affairs and the affairs of loved ones is important. Everyone should investigate tools like medical power of attorneys, living wills, financial power of attorneys and more with a qualified attorney. These are legal tools, but can have significant financial impacts on you and your loved ones.”