How Much Do Navy SEALs and Other Special Ops Make? 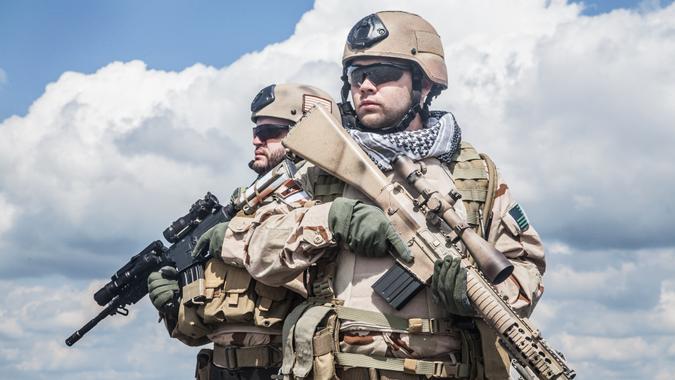 We’re all familiar with the commercials encouraging Americans to enlist in the military. Action-packed and provocative, these ads (even those that call out individual career types) tend to keep it simple, glossing over details about one very important factor: money. How much can you make in the military, particularly as you advance up the rungs?

Military Money: The Complete Guide on Benefits, Investing and More
Find Out: 4 Ways Military Members and Their Families Can Achieve Financial Success

When you’re talking about base salary, the answer is not a whole lot — at least, not when compared with many civilian careers. Even those in high-ranking special forces divisions aren’t sweeping in hundreds of thousands of bucks a year; in fact, they’re often earning much less. Money worries often plague military families, with nearly 9 in 10 active service members and 84% of military spouses worried about money, a National Foundation for Credit Counseling report found.

To get a better idea of how military pay works, here’s a look at special forces military careers in the Army, Navy, Marine Corps and Air Force, respectively, considering the average salary and from there, breaking down how payment in the military generally works. You’ll want to read on to see some of the perks and benefits that might make the lower pay worth it for you.

In the army, a special forces engineer sergeant specializes in construction and demolition. They’re tasked with building infrastructure such as bridges and field barricades and executing demolition raids against enemy targets. According to Glassdoor, the average salary for this role is between $65,302 and $70,252. This is around what a boilermaker or a first-line supervisor of construction trades and extraction worker would make in the civilian world. This is on the high end for the special forces field. According to ZipRecruiter, the overall average salary for a professional in the army’s special forces is $52,611.

Read: How the Military Incentivizes Getting Married With Pay

Like the U.S. Army, the Navy SEALs are made up of a large number of military personnel. Pay is greatly dependent on years of service and the nature of one’s contract. In 2018, an active and enlisted Petty Officer Third Class with under two years of service started at $2,089 a month. According to Glassdoor, the average salary for a Navy SEAL is $53,450. This doesn’t seem like much considering that these officers are the core of the United States Navy.

Dating back to WWII, pararescuemen perform search-and-rescue operations, where they recover essentials (and possibly people) from downed aircraft. Sort of like flying EMTs, pararescuemen have paramedic certification. Given the demanding physical nature of the job, they also need to be incredibly fit. According to Simply Hired, pararescue salaries average $57,726 a year.

An SOCS is one of the higher-ranking jobs in the Marine Corps, whose mission is to recruit, train and deploy marine forces as delegated by the U.S. Special Operations Command (USSOCOM). These professionals use complex strategies and implement sound-free tactics in unpredictable environments. These specialists are among a higher-earning class, but on average, a Marine Corps member makes $51,000 a year.

My question, as yours may be, too: Why is military pay so low? There are a number of reasons.

“First, most people join the military for patriotic reasons, just as teachers teach because they enjoy helping others,” said Dr. Monroe Mann, Ph.D., Esq., MBA, LLM, ME,  director and coding projects manager at Break Diving and a Bronze Star nominated Iraq war vet. “People join the military because of what it stands for, and it brings pride to oneself.  Second, it comes down to supply and demand.  There will always be someone else ready to take his/her place, so the salary does not need to be incredibly high.”

Additionally — and what cannot be overstated — is the slew of expenses paid that come with a military job.

“Medical, dental, housing, food and vacation benefits are given on day one for both the service member and their families,” Lerette said.

1. Vacation — 30 days and all holidays, plus four-day weekends nearly every month

2. Housing costs — depends on location or furnished by the military, increases when married and again with children

4. Food is furnished or the service member is given a stipend.

More: 20 Companies With the Happiest Employees

“It all adds up,” Lerette said. “As a high school graduate, this was a lot of money, and it was all mine!”