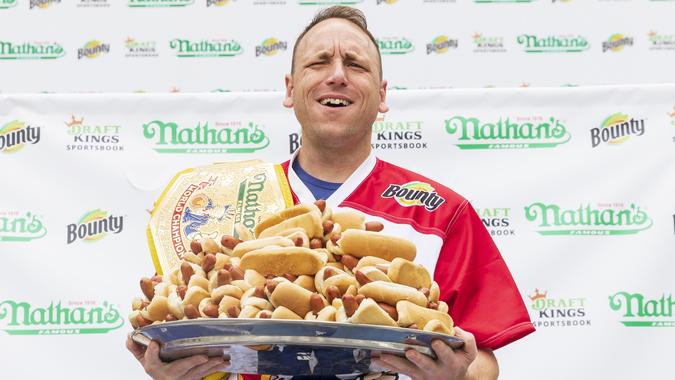 Money’s Most Influential: Where Do Americans Get Their Financial Advice?
Introducing Modern Money Etiquette: Answering Thorny Questions About Tipping, Gifts and More

The greatest competitive eater of all time, Chestnut — a.k.a.: Jaws — has been crowned Nathan’s champion every year but one since the era of Takeru Kobayashi in 2006. Michelle Lesco won the women’s division with 30 3/4 HDB, a stellar victory, but one that she earned without having to face the Joey Chestnut of the women’s division. Miki Sudo — who scarfed down 48.5 HDBs in 2020 to break the world record and win her seventh straight title — sat this year out because she’s due to give birth at the end of the month.

Chestnut can relish his victory, which he earned by beating No. 2 Geoffrey Esper by 26 dogs. The real loser, however, was ESPN, whose efforts did not cut the mustard. The network’s feed cut out several times, leaving frustrated audiences wondering if their TVs were on the fritz during some of the event’s most dramatic moments.

Take a break from your barbecue to learn more about the Nathan’s Hot Dog Eating Contest’s competitors, their net worths and career earnings, and fun Nathan’s hot dog stats to share with your friends over the grill.

In normal years, tens of thousands of spectators flood Coney Island to watch the spectacle unfold, just as they have since the world’s most famous eating contest was first recorded in 1972 — the true original was held in 1916. In 2020, however, the pandemic changed all that and Chestnut broke the record without a live audience there to cheer him on. Even so, last year’s contest stood out as one of the first live events of any kind to take place after the lockdowns of spring 2020, making it a truly historic event even without two world records.

Find Out: Competitive Eating and 27 Other Unusual Careers

Not just anyone can enter this eating contest. Contestants must compete in one of at least 10 qualifying events held from March to June in various cities across the U.S. to earn a chance at the Nathan’s Hot Dog Eating Contest prize money.

A handful of eaters have dominated the Nathan’s Hot Dog Contest in recent years, with reigning champion Joey Chestnut claiming 14 of the last 15 titles in the men’s division — the lone blemish was a loss to Matt Stonie in 2015. And Chestnut’s streak started when he broke a run of six straight titles for Takeru Kobayashi, a legendary pioneer of the sport, from 2001-2006.

Joey “Jaws” Chestnut surprised no one by cruising to his 14th Mustard Belt in 15 years, extending a stretch of dominance that has defined his sport for over a decade. He might have surprised some, though, by consuming 76 HDBs for the new record.

Chestnut is the greatest competitive eater in history without any rival, holding 46 different world records across 46 different disciplines, including downing:

The California native and former construction manager has dominated the competition at Nathan’s Famous 4th of July Hot Dog Eating Contest, having won every single year he has entered, save for finishing second in 2015 by a mere two HDBs.

Joey Chestnut’s net worth is $2 million according to Celebrity Net Worth.

Joey Chestnut Has His Own Condiment Business

In many ways, Joey Chestnut is the sport of competitive eating. Like Tiger Woods, Michael Jordan, and Wayne Gretzky in their heydeys, he’s the one name everyone knows even if they know nothing else about the sport — and now he’s branching out.

The No. 2 female eater in the world, Michelle “Cardboard Shell” Lesco has ranked in the top four of the Nathan’s contest every single year since 2011, including three second-place finishes — but 2021 was her year. She is now the defending champion of the most important event in her sport.

Lesco, who hails from Tucson, Ariz., is also a well-known humanitarian, working as the senior manager of youth services at the Volunteer Center of Southern Arizona and helping to fund wells in the Central African Republic and Ethiopia.

Remote: Companies That Let You Work From Anywhere

Legend has it that the Nathan’s Hot Dog Eating Contest began in 1916 as a way for four immigrant men to determine who among them was the most patriotic. The winner was Jim Mullen, who ate 13 hot dogs, according to author Jason Fagone in his book “Horsemen of the Esophagus: Competitive Eatings and the Big Fat American Dream.” Of course, if you believe the claims of famed PR guru Mortimer Matz, that’s all an elaborate fiction that he and Max Rosey fabricated to give the event more character when they first started holding it in the early 1970s, according to the New York Times.

The contest is currently governed by Major League Eating and held at Nathan’s Famous flagship restaurant in Coney Island in the New York borough of Brooklyn. If you do believe the stories about the earlier start date, 2018 would have been the 100th occasion that the competition has been held since 1916 — the contest was (hypothetically) canceled in protest in 1941 and 1971.