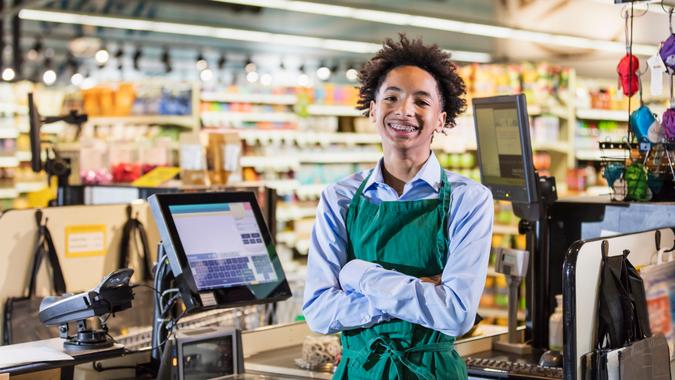 Before you jump into the list, it’s important to familiarize yourself with the laws and rules around jobs that hire at 14.

Labor Laws for Places That Hire at 14 Near Me

Employers who have workers under 16 have to deal with a more stringent set of rules than those who only hire older people. This is one of the reasons places won’t hire younger workers. These rules are very specific, though, so you can help your teen come up with some solutions for the problems these extra rules may cause before they even have an interview.

Some states have different rules from the Federal Labor Standards Act, in which case the more strict rule needs to be obeyed. Some states will also require work permits or age certifications. Check the relevant state’s labor laws before searching for “jobs that hire at 15 near me.”

The minimum age to work in the United States is 14 years old, outside of agriculture jobs. There are a few exceptions to this rule. Most of which are either businesses that people under 14 or 15 years old start themselves, but the others are:

People of any age, including babies, can work as actors or performers in movies, plays, on the radio or TV. This includes singing and playing music as well.

People under 14 are allowed to deliver newspapers to customers but to deliver other items, they need to be 14 years old or older.

Working for their Parents

Young people are allowed to work in a business owned by their parents as long as it’s not hazardous.

The federal government does not have an age restriction for young people working in agriculture, but most states do. Check for your state on the Department of Labor’s chart.

Number of Hours 14 and 15 Year Olds Can Work

Even if young teens don’t attend public school, the hours they are allowed to work are defined by the hours of the public school system in the area where they live. Here are the restrictions on hours that young teens can work from FLSA, but states may have different rules. The Department of Labor has a chart for this as well.

Minors 14 and 15 years old are allowed to work the following hours:

Benefits and Drawbacks for Working at 14 or 15 Years Old

It may be exciting or terrifying to hear that your young teen wants to start working. As their guardian, you will know them best and know what they will be able to handle. Here are some other factors to consider while deciding if your 14 or 15-year-old should get a job.

The biggest benefit of getting started working early in that time in the market will lead to better financial outcomes than timing the market. This is investing basics, so if your teen is interested in investing their pay, then that financial growth is a great point for letting them get to work.

Teens who work get a chance to learn about and practice real-world personal finance before it’s a make-or-break situation. Messing up and overspending at 15 years old is a lot easier to fix than doing it at 21.

Working outside the home can add to a teen’s skillset and diversify their experiences. Teens tend to have a high rate of job satisfaction. This can give them a jump on their peers at their next job or college since they’ve already practiced interviewing and behaving professionally.

FLSA only requires employers to pay employees under 20 years old $4.25 per hour for the first 90 consecutive days of employment and then they are bound to regular minimum wage. Certain students, apprentices, or people with disabilities might receive wages lower than the minimum in some cases.

ZipRecruiter is seeing wages for teens vary wildly from $6.97 per hour to $28.12 per hour with an average rate of around $17 per hour. This includes older teens as well. How much is your child’s time worth? This is especially important if they need extra tutoring or want to participate in extracurriculars that can help them later.

The most harrowing drawback is that some research has shown that as hours of work increase, grades may start slipping. In some cases, teens began engaging in alcohol and drug use due to a seeming sense of independence and maturity that comes with working. Though, some think these risks may be mitigated by the home and work environments.

Places That Hire at 14 Near Me

Retail may feel like a rite of passage into the working world for some people. These stores offer that option to young teens.

Publix is an employee-owned grocery store with 1,297 stores in the Southeastern United States. Teens who are 14 or 15 years old can be cashiers, floral clerks and baggers.

Fareway is a grocery store in the midwest serving 6 states, with 120 locations: ​​Iowa, Illinois, Minnesota, Missouri, Nebraska and South Dakota. The minimum age for their grocery department is 14 years old, but you will have to be 18 for the Meat or Bakery Departments.

Zurchers is a party store. They have 15 locations in Utah and Idaho. They hire 14-year-olds as cashiers.

Foodservice is a very common first job. These restaurants are proud to hire younger teens.

Chick-fil-a has 2,803 stores across the United States. They are a franchise so different restaurants have different rules, but locations in North Carolina, Pennsylvania and California have ads to hire 14-year-olds to work as Cashiers and Front of House positions.

McDonald’s has 13,257 stores. The chain stores will hire 14-year-olds as Team Members.

Runza is a fast food restaurant in Nebraska, Kansas, Iowa and Colorado. They have 85 locations and hire 14-year-olds for Crew Member positions.

Cici’s Pizza is a buffet-style pizza restaurant that is looking for cashiers, dishwashers and stockers. There are 299 Cici’s locations in the United States.

These employers are a little more exciting. From theme parks to sports and rec.

YMCA is an international recreation organization. There are 2,400 locations nationally. Most hire 14-year-olds for child care, sports watch and their D.R.E.A.M staff.

Six Flags is a nationwide theme park with 27 locations in the United States. Currently, locations in California, Missouri, Texas and others are hiring 14-year-olds for their foodservice and admissions teams.

There is only one Hersheypark, but they regularly hire 14 and 15-year-olds. They even have a specific area on their site for that age group.

Other Types of Jobs

Here are some ideas for less traditional jobs for younger teens.

Some assisted living facilities, like Parkshore Senior Living Community in Seattle, WA or Carrington Court Assisted Living in South Jordan, UT, hire 14-year-olds. These are mostly for foodservice and greeter positions, but the clientele is different than at regular restaurants.

Denver Public Schools in Colorado hires students for positions like Food Service Worker and Sweeper. These positions pay $15 an hour.

“Entrepreneur” can mean anything from babysitting and dog walking to Shark Tank level product ideas. The best thing about being a young entrepreneur is that the duties and responsibilities don’t change as the owners get older, only the size of the business. A decent business started at 14 or 15 years old could carry over to a full-time career or at least a fun side-hustle.

Only you and your teen will know when it’s time to start looking for work. If that time is now, then this list is just a starting place. These places hire 14 and 15-year-olds where they are allowed to. Check small and local businesses in your area for and don’t forget to brush up on your personal finance basics.

Diane Fogle is the owner and sole freelance writer at The Little Green Bird. She received her Masters of Library and Information Science from the University of Denver.  The research skills gained through that program, combined with a love of learning and intellectual freedom, have led her to a passion for helping businesses communicate with their customers. She lives in Colorado where she hikes with her husband, two young daughters and an old greyhound.