When it comes to money, what’s your financial focus? My poor dad — my natural father who spent his life working in the public school system — spent much of his energy working for others and saving as much money as he could. He was addicted to “safe” decisions with his money.

“If you want to be rich,” my poor dad said, “Go to school, get a good job, and save your money.” The only problem is that my poor dad never became rich. He worked long hours, struggled financially and was never happy. If he wanted something nice, he denied himself. If we wanted to go on a trip, he’d say, “We can’t afford it.” At the end of his life, my poor dad was penniless. The costs of old age eroded his savings and he had no investments to fall back on. If it weren’t for his pension and Social Security, he’d have been in real trouble.

His financial decisions weren’t “safe” after all.

At a young age, my rich dad, my best friend’s dad, taught me a different mindset about money. He said, “Savers are losers. If you want to be rich, don’t save your money, make it work for you.”

Unlike my poor dad, rich dad was not highly educated. From a young age, he had to help support his family by running the family business. But what he lacked in traditional education, Rich Dad made up for in financial education. He understood money and how it worked. As a result, my rich dad owned many businesses and investments that produced cash flow for him every month.

He didn’t work for others, enjoyed the fine things in life, and was very happy. Rather than save money, he invested it in assets that made more money for him. At the end of his life, Rich Dad was wealthy in many ways. He’d lived a full life with friends and family — because of his financial freedom.

The difference between my poor dad and my rich dad can be found in their financial focus.

My poor dad focused on saving more money rather than earning more money. The problem with his mindset is that it required working for money and for others. Because my poor dad was overly concerned with putting money in the bank, he missed many opportunities to use his money to make him richer.

When it came to his financial focus, my poor dad spent his energy working to make money, pay his expenses and save what was left — and very little was left.

Making money work for you

Rather than focusing on saving, my rich dad’s financial focus was on earning more money. The advantage of his mindset is that it required making money work for him. Because my rich dad was focused on making more money, he found many opportunities to expand his riches.

When it came to his financial focus, my rich dad spent his energy building his cash-flowing assets, building his income through those investments and then paying his expenses.

Planning to be rich

The difference between my poor dad and my rich dad essentially came down to how they managed their money. Poor dad said, “Live below your means.” My poor dad’s budget or money management focused on cutting expenses to meet his income. It was important for him to pay everyone else and then enjoy what — if anything — was left.

What he meant is that most people view a surplus as an asset. They save their extra cash in the bank or they spend it on liabilities. Rather than view extra money as an asset, Rich Dad viewed it as an expense to be invested. By making investments an expense in his budget, my rich dad ensured that he would make them a priority. He called it paying himself first.

So the question today is: Who are you paying first, yourself or everyone else? Your mindset is everything. If you want to be rich, I encourage you to change your mindset about money — and start focusing on earning. 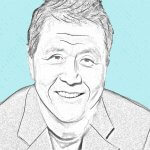 Best known as the author of Rich Dad Poor Dad — the #1 personal finance book of all time — Robert Kiyosaki has challenged and changed the way tens of millions of people around the world think about money. He is an entrepreneur, educator, and investor who believes the world needs more entrepreneurs who will create jobs. > Net Worth > Business People > Robert Kiyosaki Answers: Is It Smarter to Save More Money or Earn More Income?