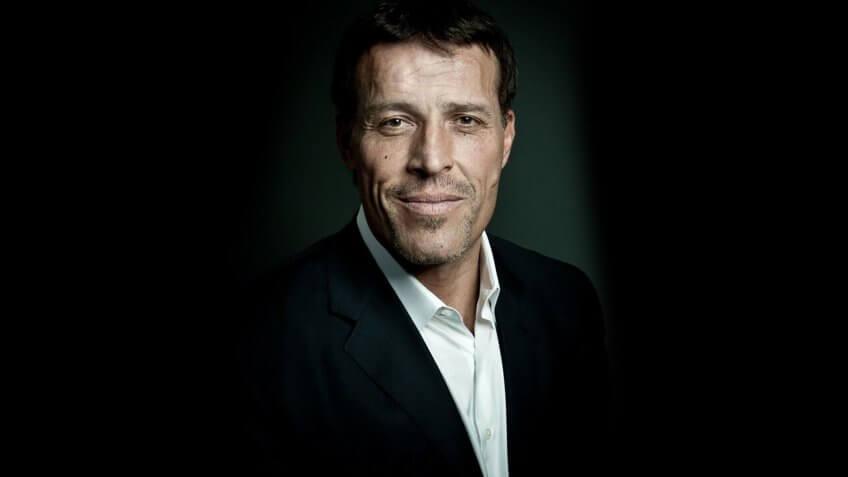 Tony Robbins has made a career of helping others lead a successful life. If he's taking his own advice, it clearly works — his empire shows no signs of slowing. As an esteemed life and business strategist, Robbins has hosted leaders and celebrities around the globe. Here's a look at how his fame and business have helped him go from janitor to best-selling author. 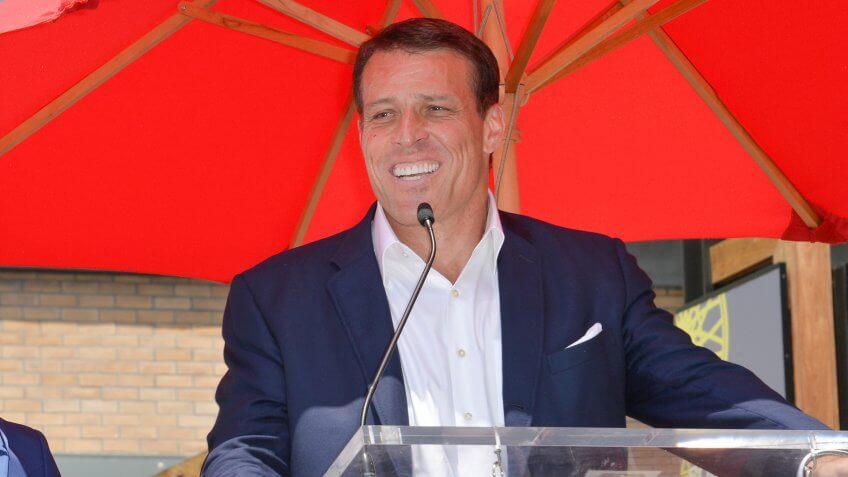 Named by the Harvard Business Press as one of the Top 200 Business Gurus, Robbins has built a lucrative career off consulting others and businesses. Fortune reported industry giants pay upwards of seven figures for his services, which covers everything from learning to be a leader to finding happiness.

Even general admission to his events can cost attendees thousands. Tickets for his upcoming Unleash The Power Within event run between $650 and $2,995. On top of that, you're responsible for all travel expenses, food and accommodations.

Consulting over 200,000 people each year, Robbins' net worth has hit $500 million, according to estimates from celebrity finance website Celebrity Net Worth. But Robbins hasn't made millions just working onstage — he's also a successful businessman.

He is the chairman for a holding company comprised of over one dozen businesses that see annual sales of over $5 billion. He's a partner of America's Best 401k, which consults businesses on their 401k services, and he founded Global Accounting Alliance, which provides outsourced CFO services. 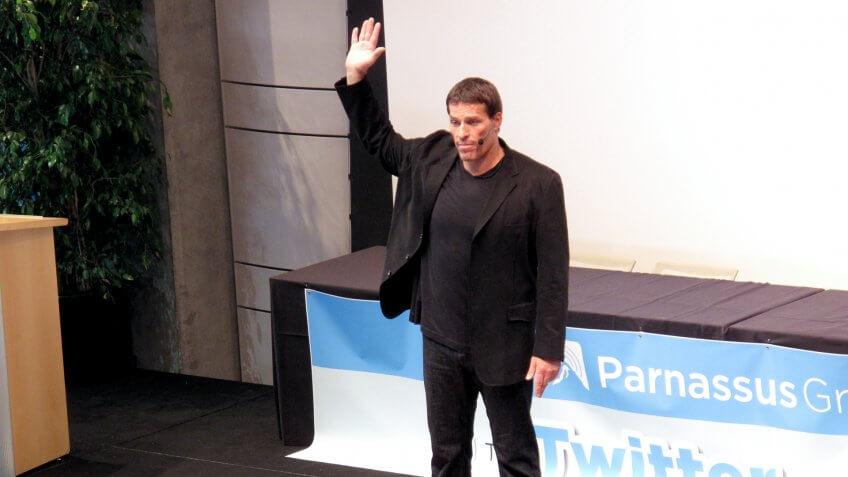 Available Feb. 28, Robbins' latest book, "Unshakeable," is a step-by-step playbook to help you achieve financial freedom. Regardless of where you're at in life, the book provides the tools needed to help reach your financial goals as quickly as possible.

"I wanted to write something to make somebody unshakeable — psychologically, emotionally," said Robbins in an interview with GOBankingRates. "I wanted them to be able to have sleep at night no matter how volatile things are. I wanted them to know that if the real estate market drops, the stock market drops, everything drops, they can still be set financially not by positive thinking or hyperbole or BS. But by having a true strategic plan."

It's too soon to tell how "Unshakeable" will resonate with the public, but if past success is any indicator, the outlook is good.

Robbins' best-selling products and books include "Money Master the Game" and "Awaken the Giant Within." He also has scores of audio and video programs that have been distributed across 100 countries. 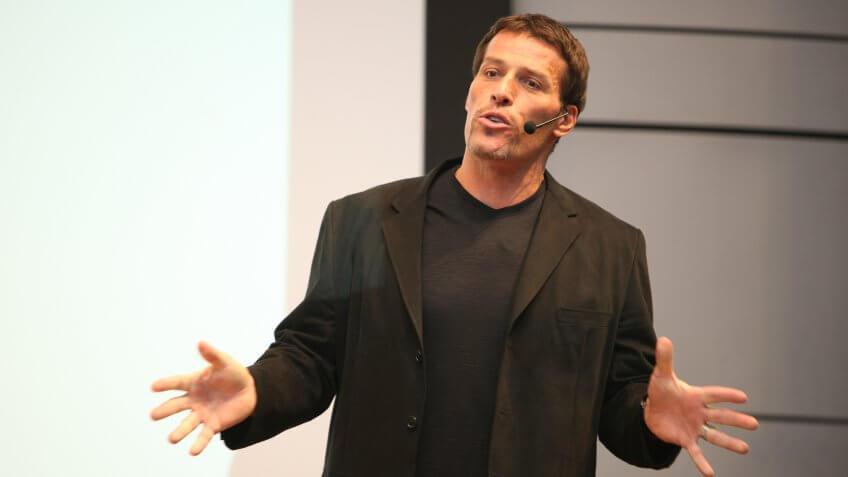 Academy-Award nominated filmmaker Joe Berlinger produced and directed "Tony Robbins: I Am Not Your Guru." The Netflix documentary follows participants of Robbins' Date With Destiny seminar and shows how their lives are changed by the event.

With a look into the production of Date With Destiny, plus moments from onstage, "I Am Not Your Guru" is a backstage pass into one of Robbins' coveted seminars. Released in July 2016, Robbins' Netflix documentary allows a closer look at the annual seminar. But, if you're watching to learn more about the seminar's structured exercises and small group activities, don't expect to gain much insight.

Filled with transformational moments that bring participants to gleeful tears, the documentary is designed to inspire. Note that the film is strictly business, though, so if you're hoping to learn more about Robbins' personal life, very little is revealed. 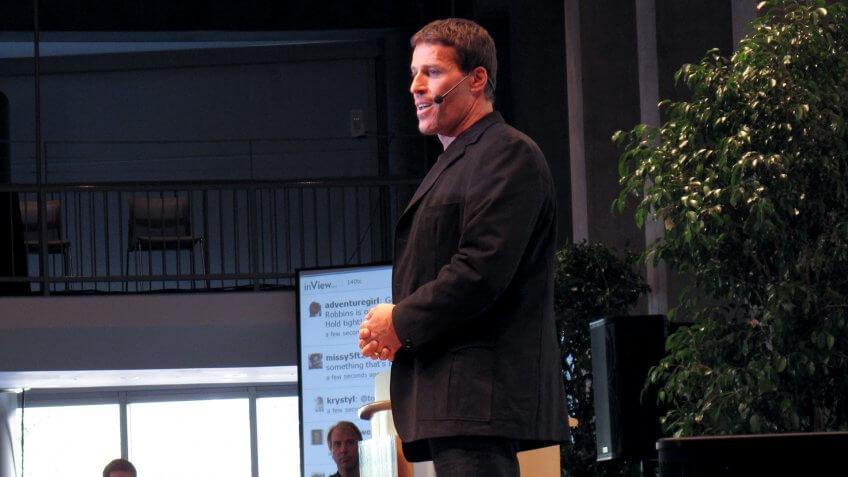 Now a multimillionaire, Robbins hasn't always enjoyed financial freedom. He grew up in poverty, just like Oprah Winfrey and Ralph Lauren. One Thanksgiving, his family was too poor to even buy food.

Raised by an alcoholic, abusive mother who went through four husbands during his youth, Robbins was forced to grow up fast to keep the household running. He took responsibility to ensure his younger brother and sister were fed and had clothes on their backs.

When he was a high school senior, his mother chased him out of the family home with a knife. A major turning point in his life, Robbins got a job as a janitor and began his ascent to the top.

Robbins now credits his rough childhood for the success he's achieved. In an interview with CNBC, he said the suffering made him more compassionate, allowing him to better understand people and help them make a change for the better. It also instilled a level of drive in him, as he had to work hard to overcome his rough upbringing. 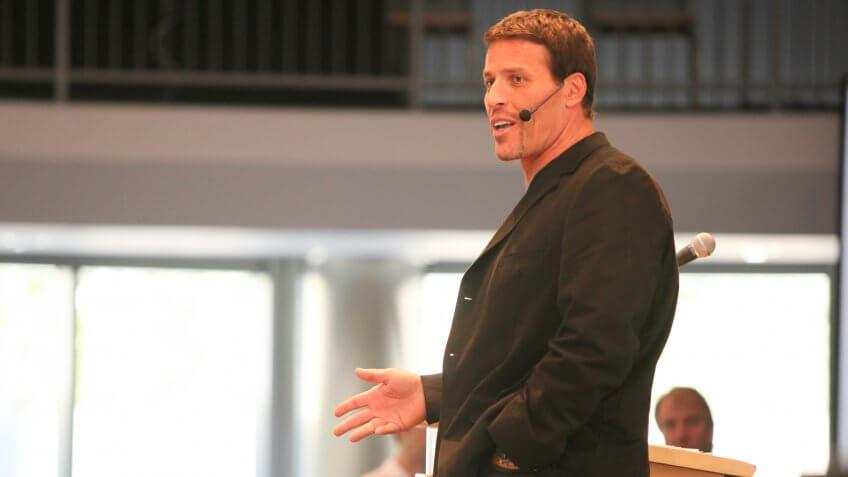 Through his years of success onstage and as a best-selling author, Robbins has donated millions to philanthropic causes. Robbins' charity, the Anthony Robbins Foundation, has worked since 1991 to improve the lives of inner-city youth, senior citizens, the homeless and imprisoned.

In 2015, he partnered with Feeding America to help feed families in need by donating the profits from his book "Money Master the Game." That partnership helped provide more than 100 million meals. 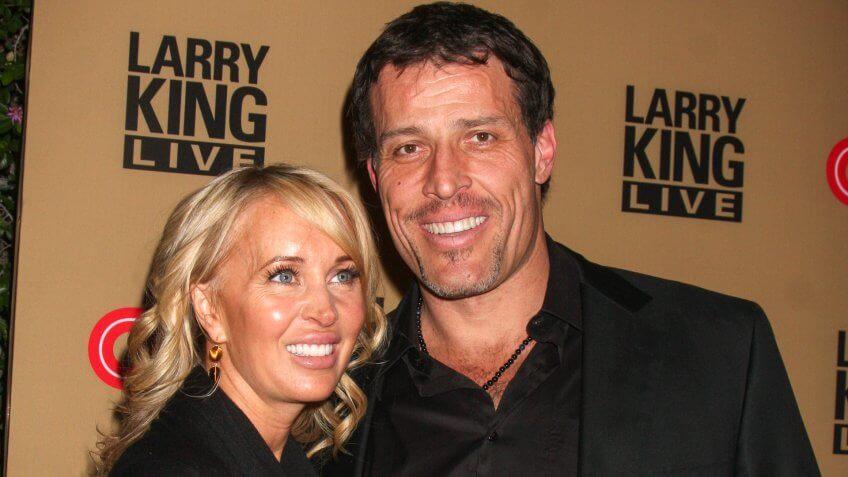 Married for the first time in 1984, Robbins met his current wife, Sage, when she was working at one of his seminars. The couple got married in 2001.

Robbins travels constantly for work, but he has a pretty spectacular place he calls home. He purchased a six-bedroom waterfront Manalapan, Fla., home in 2013 for $24.75 million. In 2016, he listed his 8,500-square-foot La Quinta, Calif., home for $4 million.

Also the owner of a private jet, Robbins enjoys the ease of travel and increased productivity that comes with this exclusive mode of transportation. When grounded, he can be found driving his Rolls Royce or Range Rover.

Up Next: See How Tony Robbins Spends His Riches 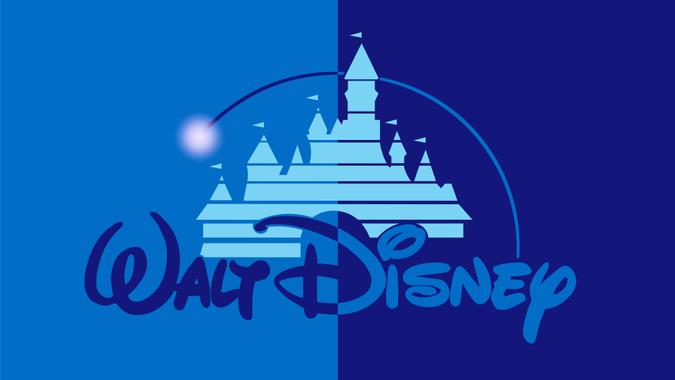 Disney Live Action Movies vs. the Animated Originals: Which Are More

See how Disney’s recent live-action remakes of classic animated features stack up against the originals — strictly by the numbers.