The NFL Hall of Fame enshrines the careers of professional football’s greatest heroes and most iconic players. Some NFL Hall of Famers disappeared from the limelight after retiring while others launched careers in entertainment, business and as spokespeople. Here is a look at some of the wealthiest members of the Professional Football Hall of Fame.

U.S. Navy veteran Roger Staubach had 153 touchdown passes, 20 rushing touchdowns and history’s best passer rating at the time he retired in 1979. He led the Cowboys to two Super Bowl wins, but his net worth wasn’t earned just off a successful NFL career. The athlete-turned-commentator amassed a whopping $600 million net worth after enjoying a second career as a real estate mogul, reported Forbes.

Perhaps no other NFL Hall of Fame legend is more synonymous with the sport of football than John Madden. In 1969, 32-year-old Madden was promoted from linebacker coach to head coach of the Oakland Raiders, making him the youngest man in the league to hold the title. He was named AFL Coach of the Year his first year after going 12-1-1 and winning an AFL Western Division Title.

In his 10 years as head coach, the Raiders never had a losing season, and earned double-digit wins in six of those seasons. He has the highest winning percentage among coaches with 100 career wins.

Madden is most famous, however, for his three-decade career as one of the world’s most iconic broadcasters, working with CBS, Fox, ABC and NBC. He is the face of Madden NFL, one of history’s most successful video game franchises, according to Complex. The 16-time Emmy winner celebrated his 80th birthday in 2016.

During his 16 seasons in the NFL, Broncos legend John Elway was elected to nine Pro Bowls and helped lead the Broncos to two Super Bowl victories. In all, he played in five Super Bowls. Among his many commercial contracts were television ads promoting his video game, “John Elway’s Quarterback.”

After retiring, he became co-owner of an Arena League Football team and then — once again — rebuilt the struggling Broncos into a championship team, only this time as an executive and not a quarterback. He is currently the Broncos general manager.

Moreover, the Hall of Famer owns a number of restaurants named Elway’s, not to mention a small collection of car dealerships.

After 20 seasons with the Falcons, Green Bay Packers, Jets and Vikings, Brett Favre retired as the NFL’s all-time leading passer. The MVP went to the Pro Bowl 11 times and threw 6,300 completions, 508 of which were for touchdowns.

During his career, Favre was among the NFL’s most marketable players, winning lucrative contracts with Nike, MasterCard and, most famously, Wrangler jeans. Since then, he’s picked up numerous other endorsement deals with the likes of Foot Locker, among others.

Widely considered to be one of the greatest quarterbacks of all-time, and certainly among the game’s greatest comeback artists, Joe Montana was named MVP in three out of the four Super Bowls he won with the San Francisco 49ers. The eight-time Pro Bowl great was No. 1 for most consecutive passes completed and most consecutive games passing 300 or more yards.

The legendary quarterback had a 92-yard, game-winning comeback drive in the final seconds of Super Bowl XXIII. When he was playing, he had numerous endorsement deals, including one with Sega for his own video game.

One-half of among the most prolific scoring duos in NFL history, Jerry Rice, was on the receiving end of many of Joe Montana’s touchdown passes. In all, Rice entered the end zone 208 times, more than any receiver. According to the Pro Football Hall of Fame, he “owns virtually every significant receiving mark.”

After 20 seasons in the game and retiring in 2004, he’s maintained celebrity status, appearing on shows like “Deal or No Deal,” “Law & Order: SVU,” “Pros vs. Joes,” “The Biggest Loser” and “Sports Sundays.”

One of the most celebrated players in the history of the New York Jets, “Broadway Joe” Namath, has a net worth of $18 million. Although he passed for 27,057 yards, threw 170 touchdowns and was the first player ever to throw for 4,000 yards in a single season, Namath is most famous for his performance in Super Bowl III, the 16-7 upset over the Colts.

In 1965, he scored a major victory for the AFL when he signed a then-record $400,000 contract during the inter-league battles. The ultra-marketable Namath has also held numerous endorsements, including Beautymist pantyhose, Nobody Beats the Wiz and Ovaltine. In 2016, it was announced that the larger-than-life Namath will be immortalized as a hologram in an exhibit at the Pro Football Hall of Fame.

Four-time All AFC Howie Long racked up 84 sacks, not counting the 7.5 he earned before sacks were considered an official NFL stat. Starting in 1981, the football star played 13 seasons with the Raiders and has a net worth of $16 million.

Skechers recently inked a contract with Long, who will serve as spokesman for the company. His first commercial will run during the 2016 NFL season. He has 11 acting credits, including “Broken Arrow,” “Beverly Hills, 90210” and “Malcolm in the Middle.” He also works as an analyst for “Fox NFL Sunday.”

Net worth is a measurement of assets compared to liabilities and accounts for properties, earnings, savings and more.  All net worth figures are according to CelebrityNetWorth.com unless otherwise noted. 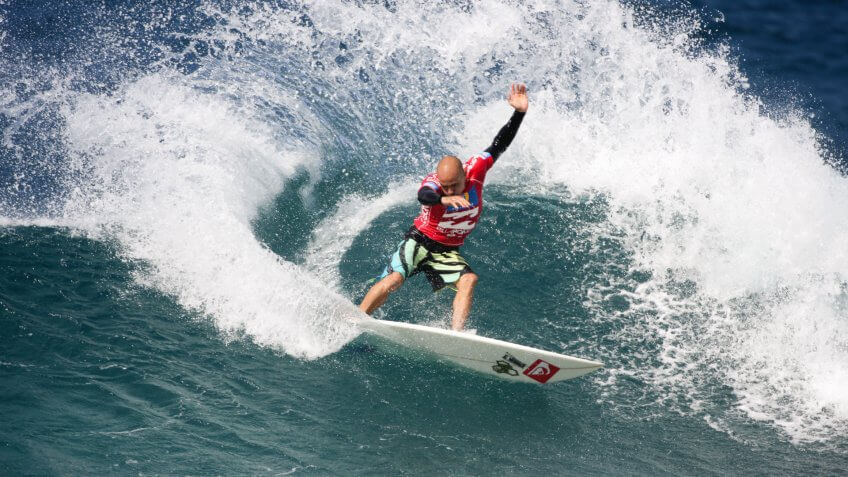 Surfing’s Highest-Paid Athletes of All Time

From Andy Irons to Kelly Slater, here are the highest-paid surfers since the 1990s.

GOBankingRates > Net Worth > Sports > Which NFL Hall of Famer Has the Highest Net Worth?