What Are the Prizes for the Top Golf Contests? 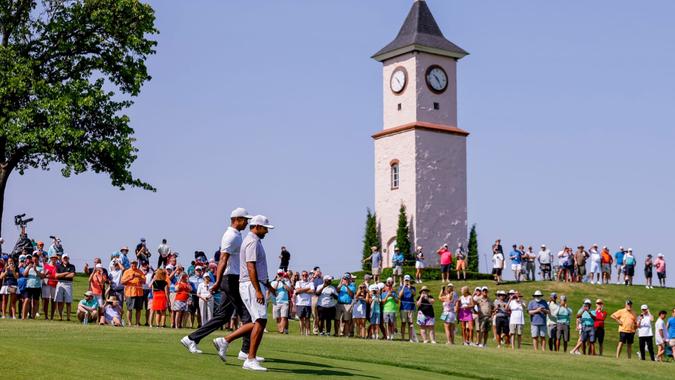 As the eyes of the golf world turn to the PGA Championship in Tulsa, Oklahoma today, what is considered the strongest field in men’s golf lines up to compete for the big money.

Golf’s majors (four for the men, five for the women) are considered the top tournaments in the sport for the prestige and history, but the prize money they pay out certainly doesn’t hurt either

Find Out: In Less Than a Decade, You Won’t Be Able To Afford a Home in These Cities
Important: 10 Kitchen Renovations That Will Hurt Your Home’s Value

With Tiger Woods, Masters champ Scottie Scheffler and other top golfers gearing up to battle for the second major of 2022, GOBankingRates looked at how much golfers can make at each major. It probably won’t surprise you that the men’s tournaments offer far more money than the women’s do. Let’s take a look.

The season’s first major, the Masters, pays a jaw-dropping $15 million. That’s $3.5 million more than ever before for the Masters, and Scheffler pocketed $2.7 million for his victory. (As an aside, that $2.7 million is what the entire purse earned when Woods won his first Masters in 1997, CBSSports.com reported.) Rory McIlroy, who took second at the Masters, won $1.62 million.

The last men’s major of the year is the British Open, or simply The Open, as it’s called in the rest of the world. This year will be the 150th British Open, played at St. Andrews, and the total purse is $10.75 million, which is the smallest of the four majors, GolfandCourse.com reports. The winner will receive $1,935,000.

Those numbers above dwarf what the LPGA players make in their five major championships. The first women’s major, the Chevron Championship, paid out $750,000 to winner Jennifer Kupcho out of a total purse of $5 million.

The KPMG Women’s PGA Championship is close behind, with a total purse of $4.5 million. The winner of the tournament, which will be held June 23-26 at Congressional Country Club in Bethesda, Md., will earn $675,000.

Another European event, the Amundi Evian Championship at the Evian Golf Club in Evian-les-Bains, France, pays its winner $675,000 out of a total purse of $4.5 million.