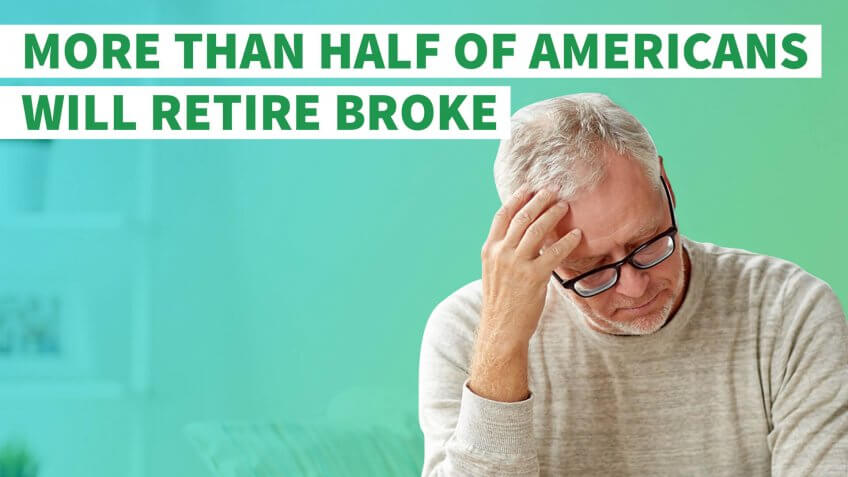 If you want a dream retirement someday, you need to set aside money now. But many Americans aren't doing this. Not only do they lack the amount needed to retire comfortably, but a majority of Americans don't even have enough savings to cover basic retirement expenses for a year. That's what GOBankingRates found in its 2017 Retirement Savings survey.

For the second year in a row, GOBankingRates polled adults across the U.S. using three Google Consumer Surveys. Each survey targeted a specific age group — millennials, Generation X and baby boomers — and included 1,000 respondents per group. Each age group was asked the same question: "By your best estimate, how much money do you have saved for retirement?"

Respondents could select one of the following options:

GOBankingRates analyzed the results to find out whether Americans are doing a better job of setting aside money for retirement. The findings aren't encouraging. In fact, these survey results could be signs that many people will retire broke. 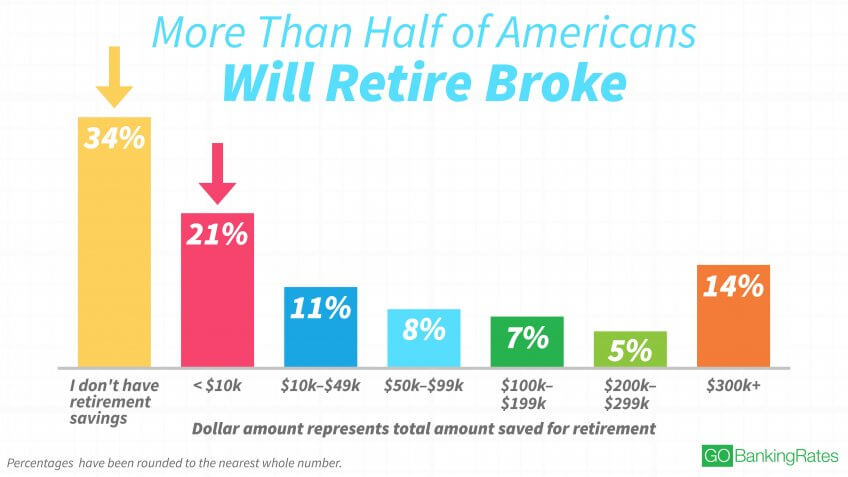 GOBankingRates' 2016 survey found that 33 percent of Americans have $0 saved for retirement. This year? Again, a shocking one in three (34 percent) survey respondents said they haven't started their retirement savings.

Considering the fact that adults 65 and older spend, on average, nearly $45,000 a year, according to the Bureau of Labor Statistics, most Americans don't have enough to cover a year's worth of expenses in retirement — let alone a few decades' worth. Without other sources of income, they'd quickly be broke.

Why Aren't Americans Saving for Retirement?

There are several reasons why such a large percentage of people still don't have anything saved for retirement. The biggest reason could be because they don't have access to a workplace retirement plan, said Frank O'Connor, vice president of research and outreach for the Insured Retirement Institute. Many workers don't have a 401k, which is an easy, systematic way to save for retirement, he said.

"The amount of people who don't even know an individual retirement plan is available is astounding," said Zgainer. He explained that because many people are so busy with their daily lives, they're not making an effort to figure out how they can save on their own so they can support themselves once they're no longer working. "That's why we don't have any money saved for retirement."

Although the majority of Americans have less than $10,000 saved, the GOBankingRates survey did find that some people are making an effort to set aside money for the future. And they could be on track for a comfortable retirement. For example:

Find Out: Here's the Real Reason Most Americans Have $0 Saved for Retirement 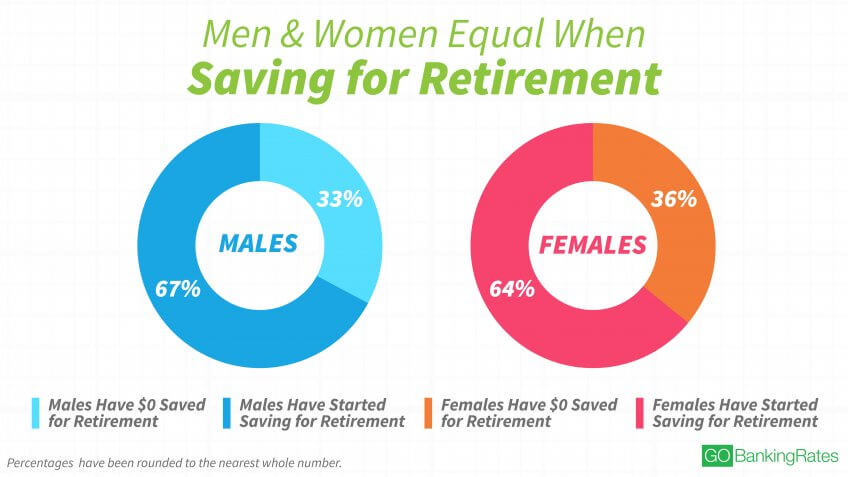 The difference in retirement savings balances could be explained by the pay gap between men and women. On average, women earn 80 cents for every $1 men earn in a full-time job, according to the National Partnership for Women and Families. Lower wages mean women have less to set aside for retirement than men. 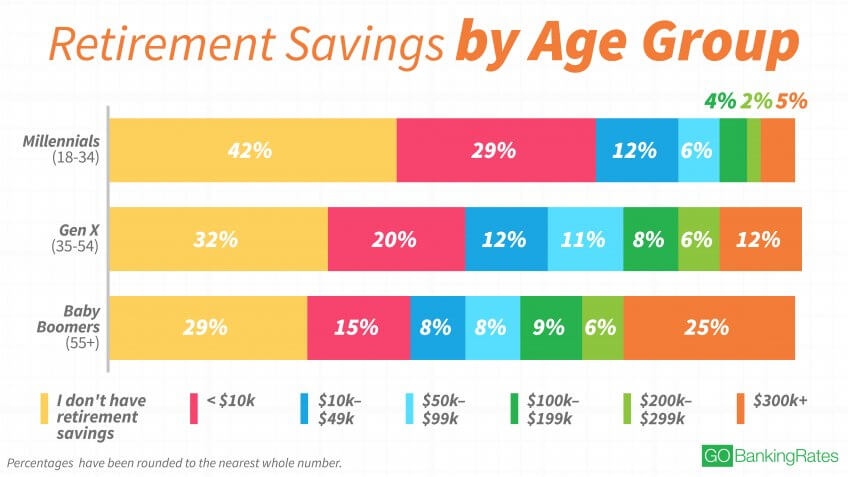 The percentage of Americans who have retirement savings increases with age — as does the amount saved, found the GOBankingRates survey.

Not surprisingly, young millennials ages 18 to 24 are the least likely to have any retirement savings. On the other hand, adults ages 55 and older are the age group most likely to have $300,000 or more saved. However, the findings show that all age groups are falling behind when it comes to saving for retirement: 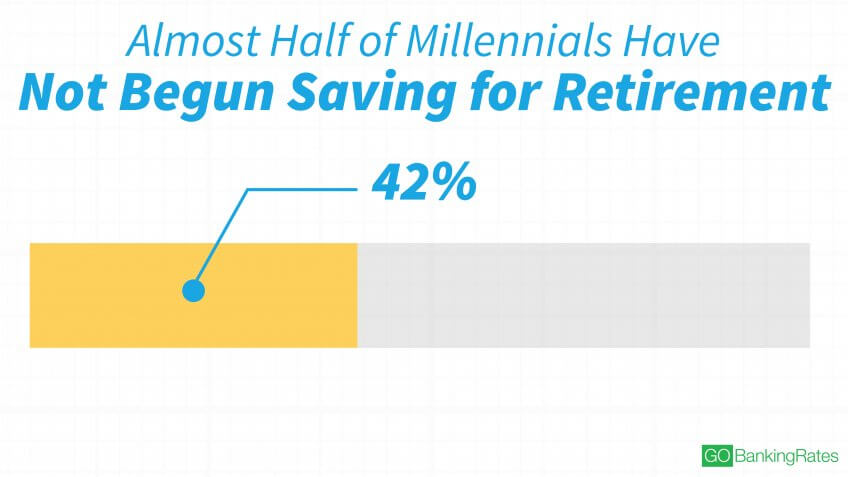 Most Millennials Are Still Lagging in Retirement Savings

It probably comes as no surprise that millennials are the most likely to have nothing saved for retirement and the least likely to have $300,000 or more saved. But, there are some interesting trends to note.

Millennial women, for example, are more likely than men to have $0 saved at 43 percent and 41 percent, respectively. This could suggest the retirement savings gap starts forming early on in young adults' careers, which further emphasizes the point that women should take steps now to accumulate more money for retirement.

Looking at the bigger picture, the percentage of millennials with no retirement savings remained constant from 2016 to 2017 at 42 percent. This could suggest that millennials are still struggling to save for retirement as they pay off student loan debt and increase their earnings at work.

But Some Millennials Have Impressive Retirement Nest Eggs

Millennials might be having a hard time carving out room in their budgets for retirement savings because there are other demands on their money, such as student loan debt repayment. "Retirement does not loom large on the list of things they're thinking about how to pay for," said O'Connor.

However, millennials are more likely than other generations to feel a responsibility to save because they don't expect social security benefits to be available for them, said O'Connor said. "They do get that it's up to them," he said.

In fact, some millennials already have a significant nest egg. The survey found that 4 percent of young millennials and 6 percent of older millennials have $300,000 or more already saved for retirement. Thanks to the power of compounding interest, that amount could grow to more than $1 million by the time they reach retirement age — even if they didn't save another dollar.

The sooner you start setting money aside, the more time your nest egg has to grow. For example, you could save $1 million for retirement if you started setting $95.40 a month at age 20 until age 65 and earned 10 percent annually. If you waited until age 30 to start saving, you'd have to set aside about $263 with a 10 percent annual return to have $1 million by age 65. 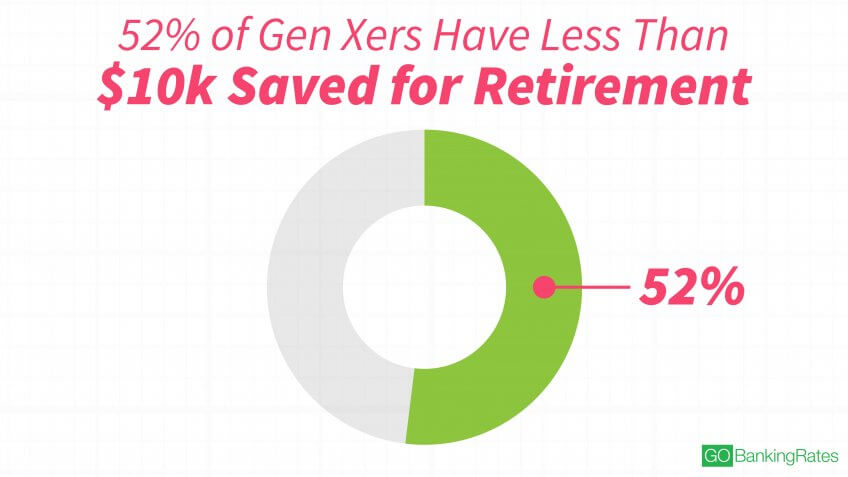 Generation X isn't that far ahead of older millennials when it comes to saving for retirement. Almost one-third of adults ages 35 to 54 have $0 saved, the survey found. And another 20 percent have less than $10,000 saved.

The bigger difference between younger and older Gen Xers when it comes to saving for retirement is the amount they have set aside:

Younger Generation X women are also noticeably more likely to have to play catch up on retirement savings. The survey found:

The gender retirement savings gap almost disappears among ages 45 to 54, with about half of both men and women saying they have $0 or less than $10,000 saved. 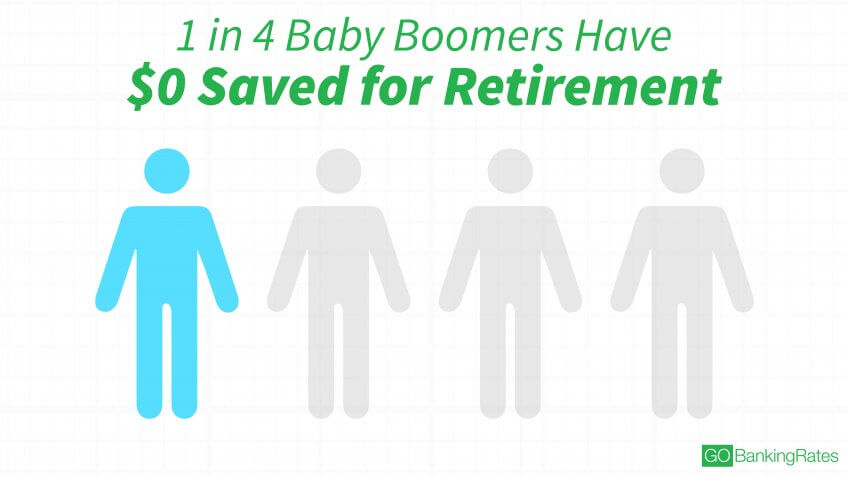 An increasing percentage of baby boomers and seniors are nearing retirement age with no savings. The survey found that 29 percent of adults ages 55 and older said they have $0 saved in 2017, up from 28 percent in 2016. Among those who are saving for retirement, a significant portion doesn't have enough set aside for a comfortable retirement:

One reason such a large percentage of boomers and seniors have little saved is because some are relying on pension payments. The Insured Retirement Institute found that one in four boomers expects to receive a pension in retirement. And nearly 60 percent expect Social Security to be a major source of income in retirement, according to IRI.

However, many boomers simply haven't taken the time to figure out how much money is needed to retire, said O'Connor. "They're not planning," he said.

The good news, though, is that a greater percentage of boomers have substantial retirement savings than other age groups. Fifteen percent of adults ages 55 and older said they have $100,000 to $299,000 saved. And, 25 percent have saved $300,000 or more. 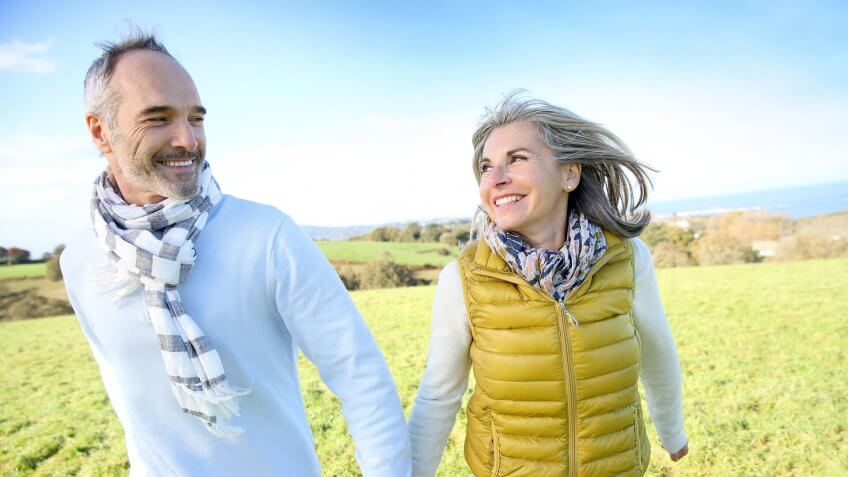 Retirement Savings Benchmarks: How Much Money Do You Need to Retire?

But before you can play catch up, you need to be able to answer this question: How much money do you need to retire?

The amount you need to retire largely depends on your lifestyle and expenses in retirement. However, you can use the following savings benchmarks to gauge if you're on track. According to Fidelity Investments, you can track whether you're behind on retirement savings using these savings factors. Multiply your income by your savings factor to see how much money you should aim to have saved for retirement at that point:

Based on these savings factors and our own survey results, GOBankingRates was able to roughly estimate how far behind some Americans are on retirement savings.

For example, the median salary of 25 to 34 years olds is $57,366. Based on the 1x savings factor, 30-year-olds should have at least that amount saved. Using GOBankingRates' survey results, an estimated 20 percent of adults in this age group are on track with their retirement savings while 80 percent are behind. Meanwhile, 40-year-olds should have an estimated $214,251 saved. But only about 15 percent are on track and 85 percent are behind.

Of course, you might need more (or less) money for retirement depending on your needs. Still, when figuring out how much to save for retirement, it's important to aim high. The only way retirement will be enjoyable is if you have enough resources to sustain yourself, said Zgainer.

And "the only way you can accumulate those resources is [setting aside money] while you're working," he said.

Up Next: How Much Money Do You Need to Retire? 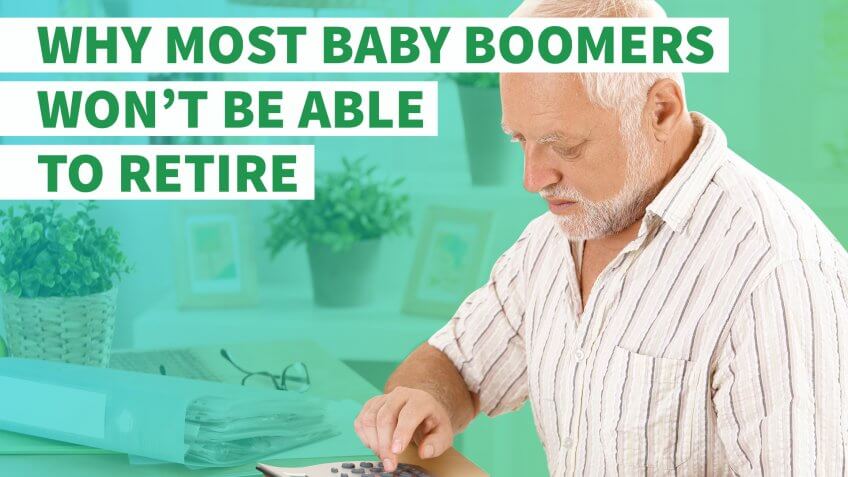 GOBankingRates > Retirement > Planning > More Than Half of Americans Will Retire Broke