Social Security COLA: Seniors Will Receive the Highest Increase in Decades, But It’s No Match For 6.2% Inflation Surge 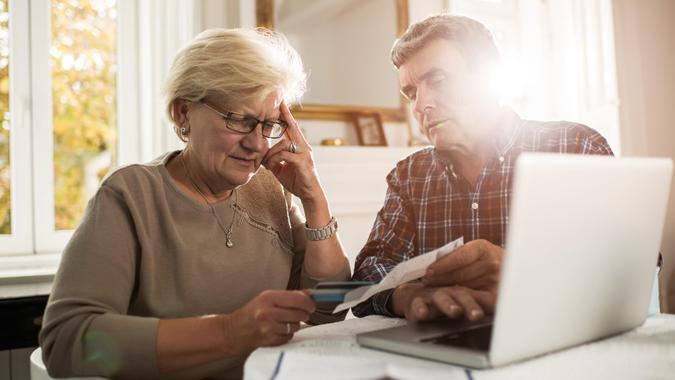 Social Security recipients will get the highest cost-of-living adjustment (COLA) in decades next year, but it still might not be enough to offset the nation’s skyrocketing inflation.

Learn: Social Security Analysis: Why CPI-E Is ‘Better Index for Measuring Inflation’ In Terms of COLA for Seniors
Find: Inflation Spikes to Over 7% in Atlanta — How Are Other Major US Cities Faring?

As GOBankingRates previously reported, the average monthly Social Security benefit for 2022 will rise to $1,657 from $1,565 thanks to the scheduled 5.9% COLA. For couples, the average will be about $3,000 a month.

That sounds good — until you factor in the annual inflation rate, which surged to 6.2% in October. The October rate was the highest in 31 years and came in above forecasts of 5.8%, according to a report from Trading Economics that cited U.S. Bureau of Labor Statistics data.

Energy costs rose 30% last month, driven mainly by a nearly 50% increase in the price of gasoline. Food prices climbed 5.4% for the month, apparel rose 4.3%, shelter rose 3.5% and medical care services increased 1.7%. Prices in all categories were higher in October than in September, which means inflation keeps rising — and might continue to do so into next year when the COLA kicks in.

Next year’s COLA represents a big jump from the previous couple of years, when the adjustment has been closer to 1%. Nearly 62 million Americans who receive Social Security benefits will get the bigger checks starting in January, though those who receive Supplemental Security Income (SSI) benefits will see the increases beginning on Dec. 30. The Social Security Administration estimates that increased payments to SSI beneficiaries will reach roughly 8 million people next year.

Even with the increased payments, many of those people will likely have a hard time making ends meet. That’s partly because inflation hasn’t only hit consumer goods. Seniors will also see a 14.5% increase in Medicare’s outpatient care coverage in 2022.

Some have suggested raising next year’s COLA even higher in the wake of higher fourth-quarter inflation, but that’s no longer an option unless new legislation is passed.

See: Retirement Alert: The 4% Rule Is ‘No Longer Feasible’ — How Seniors Should Adjust To Match Inflation
Explore: Social Security: How to Boost Your Benefit by $800

That leaves seniors with few other options outside of applying for help in other areas. These include the Supplemental Nutrition Assistance Program (SNAP), a food stamp program that helps lower-income Americans pay for food; and the Commodity Supplemental Food Program, which provides low-income elderly Americans with nutritious food from the U.S. Department of Agriculture each month.