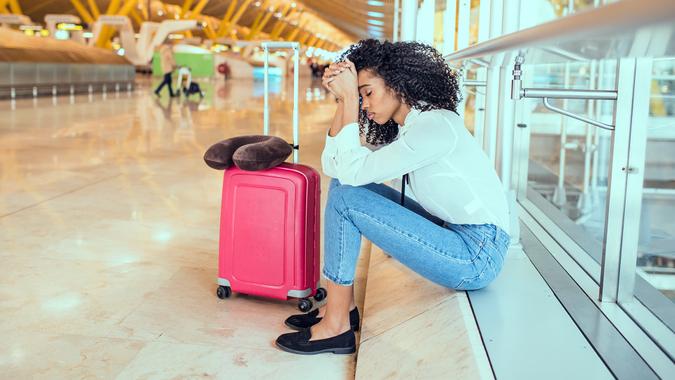 Inflation skyrocketed to 8.6% in May, gas prices and rates are ballooning, and the crypto winter is here. But despite the slew of gloomy news, Americans are ready and excited to travel, after two years of being pandemic-cooped up. With wanderlust kicking in, personal finances might take a hit as both airline fares and hotel prices have seen prices sharply rise, however.

Live Richer Podcast: Canceled Flight? No Problem – Your Credit Card Might Pay You Back
Read: Stimulus Updates To Know for Summer 2022

Indeed, 23% of Americans say they will cancel or put off their travel plans because of inflation, according to a survey by the Country Financial Security Index Report.

But not to worry, there are ways to travel smarter, and cheaper.

Speaking on the Live Richer podcast, Brian Kelly, the founder of The Points Guy, says he has been traveling like a millionaire since he was 12 and gave some tips on how to save money when traveling on a budget.

Of course, racking up credit card points and learning how to use them smartly and efficiently is still one of his top tips. But what about some lesser-known additional perks some credit cards offer?

But let’s start at the top.  As Kelly said on the podcast, “It’s all about the points.”

Kelly recommends that everyone should book their travel, including flights and hotels on credit cards that offer trip, interruption, delay and cancellation coverage.

“Because what’s happening in the travel world is that airlines are melting down. Your flights are going to get canceled. You’re going to get stuck with an overnight hotel stay at some point. And what people don’t realize, [is] the airlines won’t give you a penny. If you beg and scream, maybe they’ll give you a coupon voucher at a motel six,” he said. “So when you’re traveling this summer, everyone look at the perks that come with your credit card and make sure you’re booking your travels because when things go awry, you [can] go to your credit card company for the compensation because the airlines, if you’re lucky, at most will give you a refund of the original price.”

And on that note, he added that first, get a full refund, which airlines are mandated to do per Federal Aviation Administration (FAA) regulations if your flight is more than five hours delayed from the time that you’re originally supposed to land.

“What I would do then is look at using frequent flyer miles and just rebooking yourself. Know that you will get that refund. If your flight plans are changed, do not take a voucher. Do not. Repeat after me, take a voucher,” he said.

In addition, Kelly said that if you’re delayed multiple days and have to stay at a hotel, depending on your credit card they will reimburse you.

“And it’s free, it’s a free perk built-in when you book with them, you’ve got those extra added coverage. Same thing with baggage. Your bag doesn’t arrive. You’re in London for a wedding and you got to shop for thousands of dollars worth. A lot of credit cards offer lost baggage protection. So you save your receipts and the credit card reimburses you,” he said.

“Also, what people will be shocked by is, when you buy stuff, even when you’re not traveling, Amex has purchase protection and so does Chase. My friend lost a $300 pair of Ray-Bans. And I said, ‘Call up Chase right now.’ It fell off of a boat when he was on a cruise,” he added, saying while “points are great,” perks are really the thing that can save you time.

According to him, while airline credit cards can be great for perks such as checking bags and lounge access, for the average person who wants the most value from points, credit cards that have transferable points, are more valuable.

One credit card, the BILT Rewards Card can help achieve both the accumulation of points and building a better score faster, as it enables customers to earn points on rent for free, with no fees. He explained that the card, issued by Wells Fargo, enables you to earn one dollar per point on rent up to $50,000 a year.

“And those points can be transferred to American, United, Virgin, Emirates. So if you’re paying rent, you should be putting it on a bill card because your credit score also goes up when you pay your rent, which is the largest expense for a lot of people,” he said.  “When that’s now on the credit card system and you’re paying it off in full every month, your score goes up and you can actually even use those BILT points to pay for your rent or to save for a down payment on a home in the future. So it’s all about diversifying and looking at every expense on your monthly budget and trying to get a bonus for it.”

In the end, what all these points and perks achieve, he says, is freedom. And not just to travel anywhere easily, but to be able to be prepared in case a bad situation arises.

“Living richly is having freedom, I think,” he said. “I mean, having frequent flyer miles gives you power. To have frequent flyer miles on a dime to be able to book almost any trip anywhere. If you’re in Europe, you get sick, you try changing a ticket internationally. It’s going to be thousands in fees…But having points and miles last minute, you can book any flight you need. So I think having that flexibility, having an arsenal of points where if anything comes up, you can be on a plane for free, is a type of freedom. I think, having points and miles and knowing how to use them is living richly.”