Repair or Replace: Car Fixes That Aren’t Worth Doing 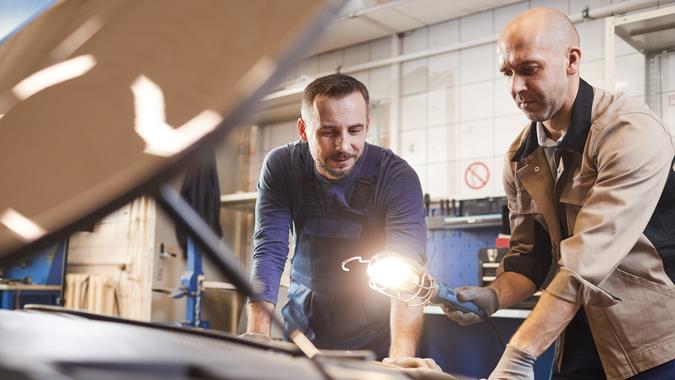 Today’s cars, trucks, and SUVs last longer and perform better than any vehicles that came before. But that kind of efficiency comes with a drawback that wasn’t an issue in the days of planned obsolescence — modern cars outlast their parts.

“With vehicles today having an average age of over 12 years hundreds of thousands of miles, the overall condition of items that were not necessarily considered in the past should now be examined before making any large investments in a vehicle,” said John ‘JB’ Burkhauser, director of education at Bolt On Technology.

For people who drive older cars, every trip to the mechanic demands a difficult decision — is the repair worth the cost? GOBankingRates asked the experts to find out when to plunk down cash for the fix and when to cut your losses.

Auto Care: Auto Expenses You Can Expect If You Haven’t Driven During Quarantine
Upgrade: 30 Cars Worth Splurging On

Transmissions Are Often — But Not Always — a Lost Cause

In any discussion about migraine-inducing repairs, transmissions wind up at or near the top of the list — and for good reason.

“A new transmission costs $1,500 to $7,000, depending on the vehicle’s brand, model, and transmission type,” said Craig Campbell, founder and CEO of Auto Parts Guideline. “And just like engine replacement, it is a very time-consuming task and you can expect $1,500-$2,000 in labor costs. Most of the time, it is cheaper to buy a used vehicle than to replace the transmission.”

“Most of the time” being the key phrase.

“Many people will say that if you need to repair the engine or transmission, it’s simply not worth it,” said Mark Beneke, co-owner of Westland Auto Sales in Fresno, Calif. “While these are big repairs, they can be very effective at providing your vehicle new life. We’ve completed plenty of engine and transmission jobs at our dealerships and have customers still driving that same vehicle many years later.”

Find Out: 25 Car Accessories You Should Never Spend Your Money On

Blown Engines Are Just as Bad or Worse

If the transmission isn’t the least enviable repair in the automotive world, it’s second only to the engine itself.

“Engine repairs are difficult and rarely provide good results,” said Campbell. “Replacing the engine is the best option, however, it’s expensive. A brand new engine costs $5,000 to $10,000, depending on the brand, car model, and year. Besides the engine price, it will cost another $1,500 to $2,000 in labor costs. So, it will cost you at least $6,500 to replace the engine of the vehicle. If your vehicle is not a new one, it’s not worth the cost. As an alternative option, for $6,500, you can buy a used vehicle.”

Flood Damage Has a Way of Causing Vehicle-Wide Problems

Water might be the essence of life, but it’s the bane of vehicles.

“Water can ruin the interior of the vehicle, especially if it is packed with cloth and carpeting,” said Campbell. “Moisture can completely make these interior materials unrecoverable. You will need to replace everything inside the car, which is very expensive. In addition, you’ll have to replace most of the electrical components in your vehicle. Last but not the least, you may have to replace the engine. If the floodwater goes inside the engine and causes hydrolock, most of the time it is not worth repairing, considering the cost.”

Related: The Rarest Supercars in the World

When Campbell mentioned that water damage can lead to electrical damage — that’s no small side effect.

“The area that we would say would provide the biggest headache is electrical issues,” said Beneke. “If you have shorts occurring or other electrical issues with the wiring, it can be extremely difficult to pinpoint where the issue is coming from. A technician would have to go through each individual wire throughout the entire car to test where the problem could be. As you can imagine, it is a very time-consuming job and the labor costs can rack up quickly.”

See: The Best and the Worst Time of the Year To Buy a New Car

Fixing Chassis Damage is Hard, Expensive, and Rarely Worth It

There are a few ways that a vehicle’s chassis can be damaged, but no matter the cause, the end result is usually the same.

“The first type of repair that comes to mind when asked whether it’s worthwhile are repairs where the chassis is damaged,” said Nicholas Edwards of Car Paint Experts Limited. “Either through rust damage or misalignment from a forceful impact, the structural integrity of a chassis is critical. Removing and repairing rust damage is a long process, realigning a chassis can only be carried out by experienced technicians with expensive equipment. In those instances, it’s more than likely that many other parts on the vehicle are salvageable. It’ll be stripped and all components sold separately will return more than the cost of the repair.”

Rust Has an Insatiable Appetite

If you spot a rust patch, what you’re actually seeing is the beginning of the end of your car — and almost no repair will change that.

“The biggest of all issues that we highly recommend everyone stays away from is rust.” said Beneke. “Rust is like cancer to a vehicle. Once it spreads, it corrodes nearly everything within a vehicle. If caught early, surface rust can be fairly inexpensive to correct. If allowed to continue, rust will eat away at anything metal and since vehicles are made primarily of metal, it can affect the safety of your vehicle. When we purchase our own vehicles, we may consider a vehicle with engine or transmission issues and maybe even PCM issues. Electrical issues we tend to shy away from as they tend to turn into too big of problems. Rust, however, we do not touch. If there is any sign of rust on a vehicle, we scrap it.”